World Expo should spur growth but infrastructure not ready yet

World Expo should spur growth but infrastructure not ready yet 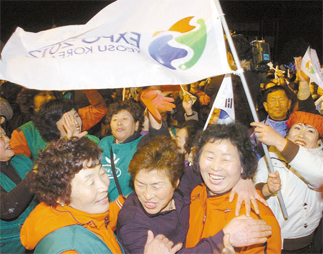 Yeosu, home to just 300,000 people, is relatively unknown outside of Korea. But the city hopes to become a global hotspot when it hosts the 2012 World Expo.
Located 455 kilometers (283 miles) south of Seoul in South Jeolla, this port city is busy preparing itself for a big party in four years’ time. But there’s a lot of work to be done. The region surrounding the city still suffers from a lack of infrastructure and an inadequate transportation network.
That’s why the city is abuzz with hopes for a big construction boom. The government is set to inject the region with massive amounts of cash.
President-elect Lee Myung-bak, who worked in the construction industry for decades, is expected to encourage the need for investment in the region.
The central government has promised it will spend as much as $20 billion by 2012. The money will be used to upgrade basic regional infrastructure, including adding multiple railroads between South Jeolla and the rest of the country.
The central and provincial governments are expected to spend more than 1.7 trillion won ($1.8 billion) to secure land and build expo-related facilities. More than 10 trillion won has been set aside for expanding railroads, airports and highways.
Such projects will eventually spur economic activities worth 13 trillion won or more, according to the government’s earlier estimates.
That means significant economic benefits for the surrounding regions, including Gwangyang, a major steel manufacturing city less than 20 kilometers from Yeosu.
The Construction Ministry has wasted no time in announcing projects to build railways and highways to connect Yeosu, Suncheon and Gwangyang, three South Jeolla cities less than 20 kilometers from each other.
“Once the government starts releasing large amounts of cash for buying land for these construction projects, Gwangyang and its surrounding areas, further bolstered by the booming global steel and ship manufacturing industries, stand to gain the most,” said Park Sang-eon, chief executive of U&R Consulting, a local real estate consulting firm.
During the World Expo, to be held through May 12 to Aug. 12, 2012, some 400,000 foreign tourists are expected to visit Yeosu. However, despite its beautiful vistas, the city has few high-end hotels or other tourist spots of interest.
That’s why the central and provincial governments have pledged to create more world-class hotels, an exhibition complex, an aquarium, an outdoor stage, an international cruise terminal, parks and monorail lines to connect all these facilities.
These projects will create as many as 90,000 jobs by 2012, according to the government.
The feelings of optimism are making an impact on the regional real estate market.
According to Good Auction, a local auction information Web site, more people are bidding for properties in the Yeosu area.
The Web site reports that 66 properties were sold in the two weeks after Yeosu won their World Expo bid, showing the average competition rate of 5.57:1.
The settled bidding price on average amounted to 71 percent of the assessed price. This was a sharp turnaround from the two weeks before the announcement, when only 23 properties were sold, with their average settled price amounting to less than 50 percent of the assessed price. 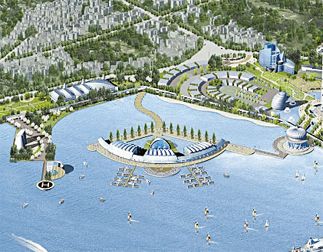 Blueprints for the city’s redevelopment in anticipation of the increased number of visitors and an economic boost in four years. [JoongAng Ilbo]

But some commentators stressed the need to achieve sustainable economic growth after the World Expo is over.
“The government first needs to establish plans to maintain all these facilities after the Expo and use the festive mood to further revitalize the region’s tourism industry,” said Han Taek-wook, a manager in real estate for Hyundai Securities.
Many soccer stadiums built for the 2002 FIFA Soccer World Cup have become eyesores. They are not used very often and provincial governments rack up massive losses every year carrying out routine maintenance.