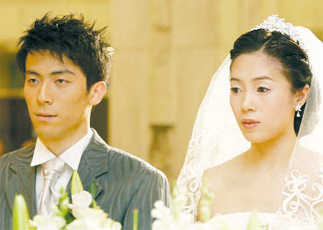 
Table-tennis player Kim Seung-hwan, 28, and his wife Kwak Bang-bang, 27, agreed to end their four-year marriage. submitting related documents to a local court in Seocho District, Seoul.
Kim met the Hong Kong-born Kwak in 2000 at the Vietnam Open. They dated for four years until they registered their marriage in Korea in April 2004. Kwak acquired Korean citizenship last year and she played as a Korea representative, contributing a bronze medal at 2006 Asian Games in Doha, Qatar.
Kim has played for Posdata and Bucheon City. He is the coach of Hyundai Cement.
Some say that the two broke up because of money problems ― Kim is said to have lost 200 million won ($211,950) in stocks, which Kwak denies. “People say we divorced because of money, but that’s wrong. The fact is we haven’t talked much since 2004, as we’ve been busy with work,” she said.
“I am going to concentrate more on training, and I want to be selected for the World Championships and the Beijing Olympics,” she added
By Lee Hyo-jeong