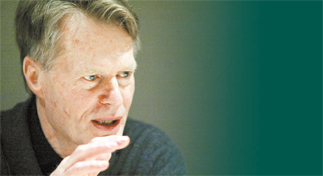 To novelist Jean-Marie Gustave Le Clezio, your home country depends on your mother tongue, not your place of birth. That holds true for global itinerants like Le Clezio.
Born of a French mother based in Nice, France and an English father based in Mauritius, off the southeast coast of Africa, Le Clezio, 67, has traveled through various countries, including Mexico, Nigeria and the United States. His latest destination is Korea ― he teaches French language and literature at Ewha Womans University.
After he finished his first semester here, which ended last month, Le Clezio decided to stay longer. “My life in Korea has been satisfactory, so I decided to stay another year,” Le Clezio said in an interview with the JoongAng Ilbo. He said that he can “write better in Korea than in Paris.”
But why Korea? He said Europe was so stable that it’s almost inactive. “Korea is a mixture of the traditional, the modern, nature and the urban. That’s why I like this country,” he said.
Le Clezio is also known for his love of Korean literature, which he describes as dynamic and multicolored. “To the French, Korea has this rigid image that comes from the history of the Korean War, but when I read the work of young Korean writers, I can see that this is a stereotype,” he said, citing Han Gang and Kim Ae-ran as examples.
Le Clezio said that he is a big fan of the late poet Yoon Dong-ju and the novelist Hwang Suk-young, who calls Le Clezio his “brother” and “comrade.”
Le Clezio was a Nobel literature prize candidates in 2007, and reporters camped outside his house in Seoul on Oct. 11, the day the winner was announced. Asked if he knew reporters were waiting for him, he laughed. “I was out that day, riding the subway,” he said. The award went to Doris Lessing.
Le Clezio has received many literary awards, including the Renaudot for his debut novel “The Deposition,” which deals with the fragility of humanity when confronted by rampant materialism. He was the first recipient of the Paul Morand prize, which is given out by the French Academy, prize for his 1980 novel, “Desert.”
Content with his life in Korea, Le Clezio reads Korean, and Kim Geon-hui, 27, one of his Ewha students, said that she was touched by the novelist’s efforts to speak the language. “He once sent us text messages in Korean saying ‘Good luck,’” Kim said.
His Korean is good enough to order street food like bungeoppang (fish-shaped bread with red bean filling) and dishes like seolleongtang (hot beef broth). But he’s not fully Korean ― he doesn’t drink soju on a regular basis.
Le Clezio describes his students as hard working and smart. “I wasn’t a very generous professor in the United States, but I am determined to give good grades to most of the students here,” he said.
He returns to Seoul next month after trips to the U.S., China and Sweden, ready for more literary explorations here.