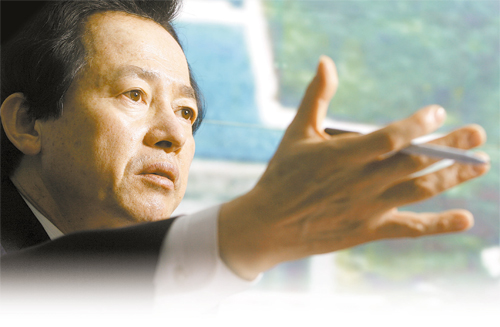 Huh Kyung-young, 58, a presidential candidate in last month’s election for the Blue House, claims that he has an IQ of 430. By Jeong Chi-ho

Huh Kyung-young, who claims he has an IQ of 430, supernatural powers and is perfectly sane, ran in the presidential election last month, his third unsuccessful bid to get into the Blue House.
His wild campaign pledges included granting 100 million won ($107,296) to every couple getting married, 30 million for couples having a baby and a 600,000 won monthly pension to everyone over 60 ― justification being that they founded the country.
Unsurprisingly, Huh didn’t win the election, but the 58-year-old candidate did get almost 100,000 votes, signaling the birth of the “Huh Kyung-young syndrome.”
Choi Jin, who runs the Institute of Presidential Leadership, said the Huh syndrome indicates the level of discontent with today’s political scene among Koreans.
“Huh was an original, absurd and therefore interesting candidate, and he gave a certain kind of catharsis to voters who were tired of politics,” Choi said.
Kim Ho-ki, professor of sociology at Yonsei University, defined the syndrome as a satire on reality and society. “People expressed their criticism against politicians by voting for Huh,” Kim explained.
Despite the election defeat, Huh is still in the media spotlight. The offices of his Economy Republic Party in Yeouido, central Seoul, are usually packed with supporters, and reporters have been kept hours waiting to interview him.
“You will be lucky from now on because you’re going to have the honor to meet our leader,” said Shin Ho-suk, one of Huh’s supporters, who are mainly middle-aged.
The rooms were decorated with hand-written banners that said, “Let’s pave the road to the Blue House for Huh, who is ready to be president.”
Park Byung-ki, one of Huh’s aides, said, “There is nothing that I won’t do for him.” Park’s loyalty is not just talk. He sold his apartment and closed several bank accounts to help raise the 500 million won each presidential contender needs for registering.
Park, a presentable man in his 30s, said that he is “only one of many Huh loyalists.”
Huh’s party was launched last November, and counts more than 100,000 citizens as members.
They came up with the 1 billion won that Huh spent on the presidential election last month.
The interview took place in Huh’s office. On the walls were giant portraits of the late President Park Chung Hee and a photograph of Huh sitting with Park Geun-hye, Park’s daughter. Behind where Huh sat was a massive picture of the Blue House.
Huh claims he spent 10 years when he was in his 20s as a “special policy-making secretary” for President Park.
Vague about his other jobs, he said he used to run five orphanages, but for most of the past 30 years he’s been thinking up policies.
Another oddball campaign pledge was to marry Park Geun-hye, who was defeated by the President-elect Lee Myung-bak in the Grand National Party primary.
In response, Park filed a defamation suit.
Asked why he remains single, Huh said, “Well, I was busy, sort of.” Then he added, “Also, I’ve kept Ms. Park Geun-hye in mind for a long time.”
One of the first words that Huh uttered in the interview was that he was “robbed.” With a clear, high-pitched voice and grandiose gestures, Huh explained that his aides polled voters on election day and found that Huh earned 38.2 percent, not 0.4 percent, of the vote, and that the President-elect Lee barely got 7 percent.
“I will battle to win back my victory,” he said. He vowed that another presidential election would take place within one year.
Rolling his big eyes, Huh said that he has many complaints against politicians. “Those who have a low IQ are ruining the country.”
His other pledges include arranging for the United Nations headquarters to be set up in Panmunjom, the truce village on the North-South Korean border, and uniting with Mongolia to build an Asian Union that will ultimately seek unity with China. 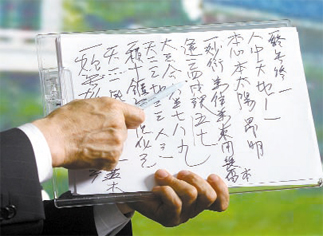 Huh Kyung-young explains that Dangun, the mythical founder of Korea, designated him leader of the country. By Jeong Chi-ho

Politics-wise, he pursues the abolition of the political party system and he wants to make National Assembly seats unpaid, honorary positions.
He is particularly proud of his pledge to give money to newly weds.
“Just bring along a piece of paper that confirms the reservation of a wedding hall and you will get a 100 million won gift from the president. Isn’t it great?”
Asked if such a gift is feasible, Huh frowned and said, “Where there is a will, there is a way. I have all the solutions in my head. Remember, my IQ is 430.”
Huh is aware that his claims to be super-brainy attract ridicule.
“There are IQ test questions that give you an IQ of 100 when you solve them within 60 minutes. But I solved them within five minutes, and therefore I got this high IQ,” he said.
Genius or near-genius IQ is considered to start at around 140-145.
To this unconvinced reporter, he asked, “What is the equivalent of ‘the sea and a ship?’” He quickly answered, “The sky and airplanes.”
Then he moved on to prove his supernatural powers, which he claims he was born with but wasn’t allowed to use until he turned 57. That was last year.
He asked me to press my forefinger and thumb tightly together. Then he said, “If I touch your body and can separate your forefinger and thumb, it means that you are ill in that area.”
After a quick “examination,” he concluded I had an arthritic knee. “Let me cure you in one second. Look at me,” he said. A moment later, he said, “You’re cured.”
To prove it, I had to press my forefinger and thumb together again for Huh to separate. He couldn’t, though he wasn’t trying as hard as before. But there was no time for me to object and his supporters burst into a round of applause.
“I am a president designated by heaven,” he said. “We have no hope without a president like me.” Then he wrote some Chinese characters from “Cheonbugyeong,” writings believed to have been penned by Dangun, the mythical founder of Korea in 2333 BCE. He claims Dangun wants him to be the leader of the country.
“I’ve met people who burst into tears when they saw me, saying they would risk their lives for my sake,” he said. “Let me tell you. There are things to be done by a person like me.”
He continued, “I’m not a strange person. I’m normal.” Regarding criticism leveled against him, he said, “I don’t care if people point their fingers at me and say I’m crazy. I have young people supporting me, and they are the pure-hearted ones.”
If he pursued his personal interests alone, he would have been the Bill Gates of Korea, he said, but he is aiming to make Korea an ideal place to live in instead. And he made it clear that he will continue to pursue his ambition for the Blue House. “This is only the beginning,” he said, drawing nods and applause from his supporters.
The Huh syndrome made a lot of people laugh during and after the election, light relief from party politics and bickering candidates. Many entertainers like the comedian Kim Gu-ra courted Huh, asking him to become an entertainer, not a politician.
Kim Ho-ki, the Yonsei University professor, said politicians should not laugh off the Huh syndrome. They should realize that Huh’s popularity is a symptom of the general malaise Koreans feel towards their political leaders, and a sure sign that people want change.
Meanwhile, Huh carries on his fight, destined to be around for a long time to come. After all, he is a genius.