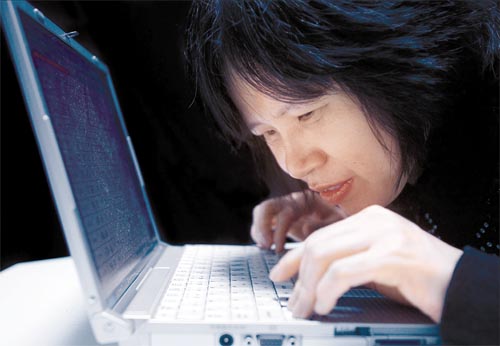 Jeon Yeong-mi, 38, is a researcher at Tokyo University who has overcome the challenges of visual impairment to reach a tough set of goals she set for herself. All photographs by Kwon Hyuk-jae

TOKYO ― Even in the depths of despair, the world can be a warm place if you try your best to live your life to the fullest.
Jeon Yeong-mi, 38, is such a person. She has found herself in a dark place in the past, literally and spiritually.
Jeon is blind, and there were times when she felt life was hopeless. But all that changed after years of fighting society.
She earned her doctorate in 2005 at a Tokyo college and has a 13-month-old baby called Shin Bi.
Shin Bi means mystique in Korean.
But best of all, Jeon was the one who changed her own world ― but it wasn’t easy.
For a long time, her one and only friend was her white cane.
From the moment she left her house, she couldn’t move an inch without it. Her cane was her eye on the world.
In 1996, Jeon graduated from college and then took a chance to attend a school for the blind in Fukuoka.
Japan was a complete unknown to her back then. She knew no one there, and she could not speak a word of Japanese.
After three years, however, she earned three different qualifications in acupuncture and other Oriental medicines.
That was the first time she felt confident about her command of Japanese and her life in Japan.
But she wasn’t satisfied with her three certificates. She had other goals in life: getting higher degrees. 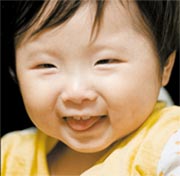 So she applied to the University of Tsukuba, reputed for its education for people with disabilities.
Her application was successful and she started doctoral research. Her thesis looked at different perspectives among blind acupuncture technicians in Korea and in Japan.
This research earned her a master’s degree, but she set her heart on a doctorate.
At that time, she heard news about Satoshi Fukushima, nicknamed “the male, Asian Helen Keller.”
He had made a name for himself in research despite being deaf and blind. Fukushima inspired her and became her role model.
She heard the professor was moving to Tokyo University to teach, and she e-mailed him. Within two hours she got a reply.
“Please take the entrance exam,” read his reply.
She did, and she became his student.
Some of the problems that befell her as she pursued her doctorate were a bout of tuberculosis and the closing of her dormitory.
Jeon found herself forced to move around different motels on weekends. It was a tough time.
During those days, she often thought back to the days when she badgered her parents to send her to the school for the blind.
Then she said to herself, “Yeong-mi, you’ve done a good job so far. You’ll do even better from now on.”
She was right.
After four years of research, she concluded her doctoral research. She found that there is no disadvantage to receiving acupuncture from a blind technician.
She was awarded her doctorate degree on Sept. 30, 2005, and she’s now a research fellow at Tokyo University.
While she was online one day, a stranger contacted Jeon via instant messenger. He introduced himself as Shin Gyeong-ho, a Korean.
He asked her for help, saying he wanted to study acupuncture in Japan at the school for the blind in Fukuoka, just like Jeon did.
Shin said that he’d quit his job because he was nearly blind. His vision had been deteriorating for seven years.
Although they were only communicating online, Jeon began to feel a closeness to Shin. She had butterflies in her heart whenever they corresponded.
“Don’t you want to meet me sometime?” he said, after a month. Jeon could not say no, because a meeting was exactly what she wanted. She flew to Busan and met Shin, 39. 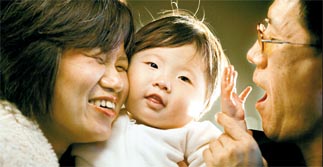 Shin Bi, the daughter of Jeon Yeong-mi and Shin Gyeong-hwan who are both blind

The meeting was a success and Jeon felt that Shin might be “the one.”
The feeling was mutual.
“Will you marry me?” Shin asked. “Right now, right here, before you go back to Tokyo?”
It snowed so badly that night that Jeon’s plane was delayed. The delay gave her time to think, and after three days Jeon found herself on a plane back to Tokyo ― as Shin’s fiancee.
“I was just out of my mind then,” said Jeon, bursting into laughter.
The wedding was in July 2006, and the marriage has been a success. Her husband is an angel to her, Jeon said. He is caring and attentive.
One time, however, she kicked him out of the house. Shin had come home after drinking with friends at a private school for learning Japanese.
“I want you to stay out tonight,” she said.
It was not because she disliked her husband’s drinking. It was because she missed time on her own.
Shin obeyed and Jeon had a sweet night to herself.
Shin is to enroll at a school for the blind in Tsukuba this spring. He is also going to start an acupuncture career.
These days, Jeon heads back home earlier than before. It is all because of baby Shin Bi.
With just five teeth right now, she can say “Mummy.”
Jeon loves to touch her baby’s soft hands and feet, and to feel the little creature squirm around in her arms.
Jeon trained herself to look after the baby, but they also have a nanny to help out. There are certain duties Jeon can’t perform, but she can change the baby’s diapers and give her daughter what she needs most ― love.
Many people, however, voiced their concerns when Jeon said that she wanted to have a baby.
Jeon fought back. “But there are no perfect parents in this world,” she said. “You’re not necessarily happy just because you’re born with a silver spoon. I can raise this baby to be a happy and healthy person.”
She’s never looked back and the doubts that circulated among those who know the couple have dissipated over time.
They’ve proved that two blind people can become wonderful parents.
Jeon used to think she was alone, when all she had was the white cane and days of emptiness. 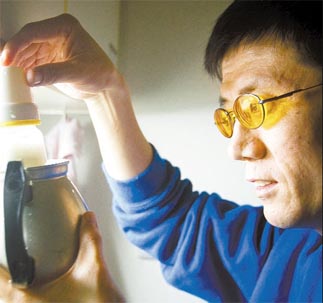 Shin prepares a bottle for his daughter.

But her family and friends have been pillars of support.
Jeon’s parents battled poverty to pay for her tuition fees, and in college she had friends who helped her to read and record textbooks and reference books. She also has friends in the neighborhood where she lives in Japan.
There’s a middle-aged woman who helps her send her child off to school every morning. And there are always strangers who help her whenever she wants to cross the road or go up stairs by herself.
She admits she wants to be alone sometimes, but she now has too many friends.
Looking back, Jeon said she has received so much from so many people that she thinks it’s time for her to give something back.
And she knows how. She wants to make a world where the blind can live in harmony with those who are not blind.
These thoughts keep her busy and motivate her to reach for her goals.
But like Helen Keller said, it is more unfortunate to have eyesight but no vision, than to have vision but no eyesight.