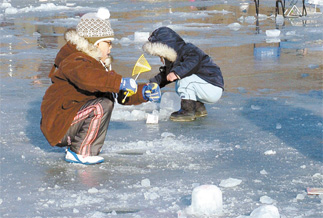 Icy days are here again, and kids prepare to cast their lines into the holes in the frozen river to catch trout. All photographs by Lee Ho-jeong

We hadn’t expected much. We thought there might be a couple of fishermen sitting by a hole in the frozen river waiting for fish to take the bait. There might be one or two kids skating on rusted skates or sledding on a contraption made from an old wooden chair.
But to our surprise, the Bukhan River was teeming with anglers and their families when we finally reached Hwacheon in Gangwon.
Hwacheon is where the Sancheoneo Ice Festival takes place every year. Sancheoneo means mountain trout in Korea.
On the river banks towered intricate ice sculptures and looming snowmen.
A tractor was pulling a long line of sleds across the ice. Kids were hurling themselves down an ice slide. An ice castle added a touch of romance to the wintry scene.
The spicy aroma of sizzling chicken kebab and odeng wafted from the tented stores.

The trout that all the fuss is about is called sancheoneo in Korean, which means mountain trout.

And there were even people on rusted skates and sleds made from wooden chairs.
The weather was mild for this time of year, even though the river was frozen, prompting thousands of people to become trout fishermen for the day.
According to the Hwacheon Festival Organizing Committee, more than 180,000 people visited over the two-day weekend festival.
That’s one of the best turnouts since the annual festival got underway in 2003.
It had taken three hours of driving from Seoul to reach the river. We’d snaked along winding country roads, past several sleepy hamlets to get to Hwacheon.
It’s located near Chuncheon, which is famous for its dak galbi (grilled chicken ribs).
But we were here for fish. We headed to the stores selling fishing tackle. Fishing lines for beginners cost 2,000 won ($2.13). For 6,000 won, you got better equipment and bait that looked like small colorful fish. The cheaper bait was brightly colored strips of rubber that looked like worms.
Once you get your gear, you can head to the fishing grounds. But not everyone can get on the ice at the same time because the ice would crack and there’d be chaos.
Instead, the organizers set a limit. The general fishing ground sees 8,000 people in a single day while the family ground only allows 1,600 people.
Reservations for the family ground can be made in advance, but tickets for the general fishing ground are sold on site.
If you arrive late with no reservations, you might miss out on the trout.
We heard some late-comers arguing with security officials.
“I drove for five hours to get here,” said one frowning middle-aged fisherman, holding a cheap plastic fishing rod. “Shouldn’t I be let in? I didn’t know you limited the number of people!”
The employee at the gate wasn’t going to budge. “Come back after 5:30. That’s when it’s free to get in.”

The Hwacheon Sancheoneo Ice Festival has become hugely popular since it started five years ago.

The fisherman shuffled back to his car. But not long after, the P.A. blared, “We won’t open the fishing ground after 6 for safety reasons.”
The fisherman must have been inconsolable.
If you manage to get into one of the fishing grounds, the adventure begins. Fishing is pretty easy and not at all strenuous. You fix the bait to the end of the fishing line and then sink it into one of the holes that the organizers have cut in the ice. Start tugging the line so the bait jigs about in the water, thus attracting the attention of passing fish, and then wait for something to bite.
The art of fishing is the art of patience. Nothing happens for the longest time, and then when a fish sinks its teeth into the plastic worm or fish tied to the end of your line, you have to move fast to reel in your catch.
To pass the time, observe your fellow anglers. You might learn a thing or two.
There are those who bring little portable chairs with them and others who get down on their knees and peer into the icy water, anxious for a trout to pass by.
There are seasoned pros and the inexperienced, who don’t know one end of a trout from the other.
But time can pass slowly, especially when you start to loose all sensation in your hands and feet as the cold creeps through your muffler, gloves and thermals.
We were reaching that point when a sudden cry rang out, breaking the stillness of the afternoon.
Someone had finally caught something.
“I’ve been sitting here since 10 this morning,” said Kim Hyeon-bae, 40, as he unhooked the fish that he’d just wrenched from the icy river.
He added it to his collection: he’d had a successful day with his rod. Now it was time to head home.
As he packed up his gear, the other anglers looked on with envy.
But everyone catches something in the end, and not just the flu. It’s a festival after all, and the organizers like to help things along by dumping a bucket or two of squirming silvery fish into the holes.
“We pour trout into the hole every hour or so,” said Hyun Mee-hee of the organizing committee.
Once you have trout in hand, and have received the congratulations of your fellow anglers, it’s time to think about cooking.
There are two ways to enjoy freshly caught trout. You can sprinkle salt on the fish, wrap it in aluminum foil and throw it on the barbeque. This method is called gui in Korean. 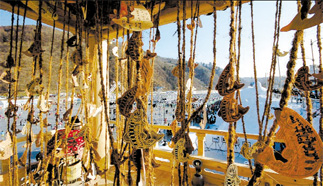 A hut to leave messages of good luck and hope, built on top of an ice castle in Hwacheon.

Another method is to forgo the cooking and just eat the dead fish raw. This is known as hoe in Korean. On each side of the banks there are places to prepare gui and sashimi.
Everything is set up, including fuel for the grill and places to sit and eat.
If you fancy trout a la hoe, there’s help at hand. For 2,000 won, you can get your catch sliced and skinned plus some lettuce, vinegar and chili sauce.
A Coke is thrown in as well.
Hoe is extremely popular and the queues to the slice ‘n’ dice stalls are usually pretty long.
However, this area is not a pretty sight.
We saw empty soju bottles rolling along the frozen ice and stubbed out cigarette butts.
A lot of visitors didn’t clean up their mess, leaving behind Styrofoam boxes, plastic wrap and dirty paper towels.
In addition to the garbage strewn around the eating areas, safety around the riverbanks is questionable.
The organizers chuck artificial snow on the steps leading down to the river.
A couple strolling along the river’s edge after dark almost slipped and pitched into the ice.
But overall, it’s a fun and inexpensive day out. General ice fishing costs 10,000 won per person for adults and high school students.
Elementary and middle school students get in for 5,000 won. Entry for children under 7 is free.
If you want to reserve a place at the family ground, you need a group of between two and 10 people.
The tickets cost 20,000 won for a group of two, and 10,000 won is added for each additional person.
Korean speakers can make reservations through the festival’s Web site (http://ice.narafestival.com).
Non-Korean speakers can call the organizing committee at (033) 440-2319.