The death of record shops in the digital age

The death of record shops in the digital age 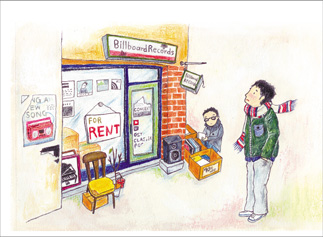 A small record shop in Suncheon, South Jeolla named Billboard Records shut down three years ago. The event is far from the biggest news in town, but for its owner and customers, the closure was deeply felt.
“Even now I find myself wanting to drive to the shop and go in,” said Jung Hyun-bin, the former owner.
Jung was an army officer for 10 years before opening the shop. The premises are located in front of the middle school he attended as a kid.
Since the shop closed down, he’s been working as the chief officer of the Suncheon Veterans’ Association. He also writes music columns for a local newspaper.
The story of the record shop gets an airing in a new documentary by Bae Chan-dong, 27. “Billboard Records” premiered at the 2007 Pusan International Film Festival.
The film conveys the nostalgia for the passing of the record shop, a deeply personal look at the passing of an era.
In one scene, we see Jung entering the shop, walking under the sign that reads “Billboard Records ― Music is a language of the heart.” The camera then focuses on an even bigger sign underneath that reads “For Sale” in big red letters.
The message couldn’t be clearer.
Bae, a graduate student in the film and television department at Chung-Ang University, frequented Billboard Records when he was in middle school.
“My sole escape and one of my greatest joys was going to the store and listening to music with Mr. Jung and his customers. Most of them were shy at first, but we somehow became very close by listening to music together,” Bae said.
It’s no secret that the record industry in Korea is in crisis. Stores around the country are closing down like shop windows on a rainy day.
It wasn’t always like this.
The industry here grew steadily throughout the 1980s and 1990s. It was worth 404.5 billion won ($430.79 million) in 1997, but in 2006 it was worth 84.8 billion won, according to the Music Industry Association of Korea.
In contrast, digital recordings and downloads, mainly MP3s, are on the increase.
One of the biggest offline record companies, SKC Plaza, closed three branches in Seoul and one in Busan last year.
Music Library in Apgujeong-dong, which was the biggest record store in the area, closed up shop as well, as did R Mart near Sookmyung Women’s University.
In 2004, industry giant Sinnara Records closed down its Gangnam branch and Music Land in Jongno closed also.
The biggest record chains at present are Sinnara and Hot Tracks, Kyobo Book’s in-house record shop.
“We still maintain Hot Tracks but it is more for publicity than a great help to sales,” said a Kyobo Books representative, who declined to be named.
“The paradigm of the music industry in Korea is changing at a staggeringly rapid rate. It’s as if the catchphrase ‘Dynamic Korea’ was made especially for this industry,” wrote the music critic Gang Hun.
“However, the surprising thing is that places like the United States, Japan and Europe, where the music industry is much bigger and the history much longer, are not experiencing such a dramatic transition,” Gang said.
“The rapid development of the Internet has contributed to this situation, but another reason is Korea didn’t have strict copyright laws like in Japan when the digital boom started,” he said. 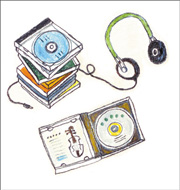 Bae’s face darkened as he recounted his feelings about the dire situation facing record stores.
“In no other country has Tower Records closed down,” he said, referring to the worldwide record chain which shut down in Korea in 2000.
Korean pop stars, including Eun Ji-won, have voiced their frustrations with the circumstances buffeting the music industry in Korea today.
“It’s unbelievable. Under these circumstances, how are we [Koreans] supposed to call ourselves a culturally developed country?” he said in a recent interview about the closure of many stores, including Tower Records.
Oh Chun-geun, 54, the owner of City, a rock bar and LP shop in Apgujeong-dong, said the digital music scene is here to stay.
“There is no point crying about it now,” Oh said. “But what concerns me is the way this new culture in Korea is degrading the value of a well-made album as if it were a disposable paper cup or something,” Oh said.
He thinks the quality issue is crucial.
“I don’t listen to MP3s because they sound flat and one-dimensional compared to a great CD or LP,” he added.
Oh, who owned an LP store in Hwahyeon-dong for 10 years, has been running City with his wife for two years.
Looking around Oh’s bar, you can easily spot the rocky transition of the Korean record industry. Vintage LPs and posters of rock stars such as the Rolling Stones, Velvet Underground and David Bowie decorate the walls around the sleek bar.
But in the corner there’s a karaoke machine.
“It’s for customers who rent the place for the night and want to sing along to the songs I play. My personal preference is edgier rock and roll from the 1960s and 1970s, but many customers prefer the oldies. But I don’t mind playing those songs for them,” he said.
Oh has fond memories of running his record store.
“Customers who used to come by often still visit me from time to time. I never pressured them to buy LPs. If a customer picked out a particular album, I would try to find albums that he or she would enjoy. I enjoyed talking to them, sharing my memories about the music and seeing them make their own memories,” he said.
Customers feel the same way.
“Going into Billboard Records was an experience unto itself. I’d go in and look around, listening to stuff that Mr. Jung recommended. He was a serious, quiet man, but when it came to music, he was articulate and vocal,” Bae said.
Lee Se-jin, another former Billboard Records regular, said the first time she happened upon the store was a rainy day.
“There was someone on my mind and I was feeling blue. As I browsed the records, I noticed the sound of a woman humming. It sounded unfamiliar, like an Irish song or something. Mr. Jung had put the track on for me,” she said.
She bought the album and it still evokes strong feelings.
“Sometimes I wonder why I was so touched by the album. I still listen to it from time to time. It has a precious presence in my life,” she said.
Brian Eno once famously compared the influence of the Beatles to that of the Velvet Underground.
“Only a thousand people bought the first Velvet Underground album but all of them went out to form a band,” he said.
Jung’s store played a similar role. Bae went on to make films about music and long-time customer Huh Su-jin is a now a D.J. at MBC Suncheon.
“Ever since I was little I would go to Billboard Records almost every other day,” Huh said. “I’ve always wanted to do something related to music, and my dreams eventually came true.”
Bae said his movie about Billboard Records wasn’t supposed to be such a personal journey.
“I originally wanted to make a movie about the record industry in general, but I got caught up in this highly personal story about the passing of an important part of our culture.
“As my research into the film grew deeper, I realized that Billboard Records’ closing had had a much bigger impact on people and their lives than I’d thought.”