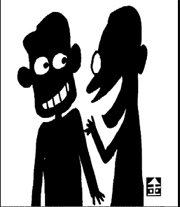 Michael Shermer is the author of several books that attempt to explain the ubiquity of irrational or poorly substantiated beliefs. In 1997, he wrote “Why People Believe Weird Things,” which explores a variety of “weird” ideas and groups. He introduced the concept of the “belief engine” in explaining why the world is still infested with unscientific and magical patterns of thinking. “The concept is a mechanism in the human brain that searches for patterns and cause and effect in a world of chance and uncertainty.”
For example, when cow dung is scattered accidentally in a field, the farmer reaps a richer-than-expected harvest.
Here, we can find how the “belief engine” works in the human brain. Shermer maintains that, thanks to the “belief engine,” humankind has evolved from hunters and gatherers. Of course, there are malfunctions to be guarded against, for example shamanist praying for rain.
But Shermer argues that a side effect of the “belief engine” is people are still dazzled by UFOs and ghosts.
In addition, people still maintain superstitious beliefs, groundless assumptions, malicious rumors and conspiracies.
Rumors emerge when information is limited, logic is inconsistent and the gap between information and reality widens.
They break out more often when people are politically suppressed, have a limited flow of information or communications are distorted. Prejudices and aggression spring up in such situations, which so-called “yellow” journalism relishes.
What is paradoxical is that such malicious rumors thrive in the Internet era when information cannot be monopolized. The Internet has already become an autobahn of rumor. Anonymity and unlimited plagiarizing are having a negative impact.
The actress Kim Hye-soo has been plagued by malicious rumors about her relationship with secretive singer Nah Hoon-ah for some time now. She’s said the rumor is groundless. She’s also talked about her distress due to the rumors about alleged love affairs and physical violence.
Michael Scheele, author of “Das jungste Gerucht”(2006) wrote that “Official correction has no power to make a rumor vanish completely. That is a frightening and surprising power that false rumor, slander and backbiting have.”
In fact, the more frightening power of rumors lies in the fact that even though someone does not believe them, the moment he or she delivers them to others, they become suddenly powerful and plausible.