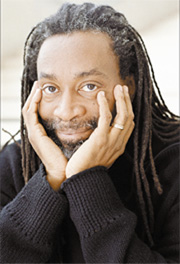 Don’t worry, be happy ― Bobby McFerrin is coming to town
McFerrin, 58, is best known for his 1988 hit “Don’t Worry, Be Happy,” the first a cappella song to make No. 1 on the U.S. charts.
He’ll perform at the Seoul Arts Center on the 25th and 27th of this month. He first sang here in 2004.
McFerrin’s 1988 hit made him a household name, but that track is just part of his repertoire of vocal pyrotechnics.
He’s also famous for his uncanny ability to hit three notes at the same time and his range of four octaves.
An ability to create weird and whacky sound effects using vocal percussion is another trademark.
Since his debut in 1982, he’s won 10 Grammy awards, sung pop, jazz and classical and sold more than 20 million albums.
Singing is in McFerrin’s genes. His father, the baritone Robert McFerrin, was the first African-American male to sing at the New York Metropolitan Opera House.
The younger McFerrin took up piano in high school and studied further at California State University in Sacramento and Cerritos College.
He toured with the Ice Follies and other top 40 bands, but it wasn’t until 1977 that McFerrin took the plunge and decided to sing for a living.
American comedian Bill Cosby got him a gig at the Playboy Jazz Festival in 1980. A year later he triumphed at the Kool Jazz Festival in New York. In May 1982 he cut his first debut album, “Bobby McFerrin.”
After touring with his own band and performing with the likes of Herbie Hancock and Wynton Marsalis, Bobby McFerrin went solo in 1983.
His first tour led him through Germany where he recorded a live album, “The Voice,” which marked his breakthrough as an a cappella star.
In the late 1980s, McFerrin took up conducting. So far he’s worked with the Berlin Philharmonic, New York Philharmonic and Vienna Philharmonic.
McFerrin also participates in music education programs and volunteers as a guest music teacher.
The JoongAng Ilbo interviewed the singer recently by e-mail.

Q.What’s so special about the human voice?
A.The human voice is uniquely charming. Our voice can sound the notes that are out of the area that ordinary musical instruments can perform. It has endless possibilities.

You seem to love improvising during your concerts.
I follow my instinct when I open my mouth and make a sound. The sound changes according to the environment and the flow of the show. To me, that comes very naturally.

Don’t Worry, Be Happy surpasses the generation gap. Why do you think that is?
When I first sang the song, I didn’t intend to deliver a specific message. I just wanted each listener to interpret it according to their situation. I think people love the song because of it’s pop music many people can just enjoy.

Your interest in music is very wide. You seem to do everything from singing to conducting.
I don’t have any one favorite genre or style. I love all kinds of music and try to go in harmony with them. But if I have to pick one music genre, it’s African music.

What made you choose conducting?
I always felt a sort of thirst for something new. So I wanted to study conducting from scratch and lead an orchestra. Fortunately, I got to know Leonard Bernstein and Seiji Ozawa and got private lessons from them.

Tell us about some of your most memorable performances.
My collaboration with cellist Yo-Yo Ma and other jazz artists such as Chick Corea and my conducting with many orchestras. I’ll especially never forget the performance with the Vienna Philharmonic Orchestra.