Pimatgol the back alleys of Seoul

Pimatgol the back alleys of Seoul 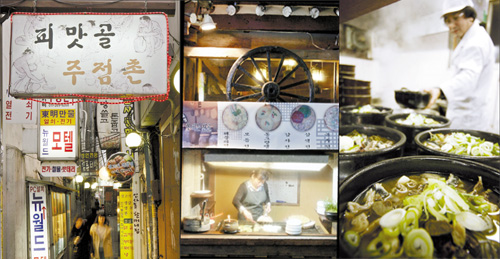 The entrance to Pimatgol near Insa-dong, left, and above, a woman fries pancakes in her store behind the YMCA on Jongno. By Ahn Yoon-soo

The alleyway is so narrow you can scrape your hands along the walls on each side.
The air is filled with the tangy aroma of grilled mackerel and the stale leftover smell of makgeolli, a kind of rice wine.
This is Pimatgol, the alley that runs east-west alongside Jongno in central Seoul.
Even during the day, it’s the kind of pathway you hesitate to venture down, unless you’re familiar with the neighborhood or are accompanied by friends.
Sunlight has no business here, blocked out by the tall walls and the tangled web of electric cables and telephone lines overhead. The lack of light and the damp atmosphere give the alley a distinct subterranean feel. You half expect to see moles popping out of the concrete underfoot.
When the sun sets, ghostly neon signs advertising motels and ramshackle restaurants light the alley. On a misty night when your breath clouds in front of you, you feel you’ve stepped back into another generation.
Pimatgol has never received the same attention as more scenic areas in Seoul such as Insadong, Samcheongdong or Hongdae.
At first sight, it’s not surprising. But for the adventurous, this walk is one to savor.
In a city that has undergone such a rapid transformation, it is hard to believe relics like Pimatgol have escaped Seoul’s bulldozers.
Tucked away underneath the towering 33-story Jongno Tower and the SC First Bank building, this side alley has for years been a haven for impoverished artists, wandering philosophers and, more recently, student activists involved in the democritization movement, especially in the 1970s and 1980s.
Over bowls of makgeolli and steaming bowls of gamja tang (potato soup) and amidst a fog of cigarette smoke, diners and drinkers engaged in heated arguments on poetry and freedom.
Perhaps that’s overromanticizing the alley’s history, but as you thread your way past the cramped shops and squeeze down ever-narrowing passages, your imagination can run riot.
Pimatgol is thought to date back to the Joseon Dynasty when commoners and lower-class government officials had to kneel before passing high-level officials.
Nearby palaces and government quarters meant there was a steady flow of yangban (aristocrats) making their way along Jongno.
They either rode horses or were carried in palanquin, known in Korean as gama.
No matter what transport the yangban favored, ordinary folk had to prostrate themselves until their social superior had passed by.
Such a time-consuming progress along the road was a major hassle to busy merchants or anyone with an important rendezvous. Over time, Pimatgol emerged as a bypass, allowing commoners to head east or west though the city without the need to bury themselves in the dirt.
The name Pimatgol tells the story itself. Pi means to avoid in Chinese; ma, horse and gol, alley. So, literally, the street translates as “an alley to avoid horses.”
“It’s really hard to say when the street was first built,” said Lee Sang-bae, a member of the Seoul Metropolitan History Compilation Committee. It was unplanned, he said, and emerged as a necessary thoroughfare.
“The government didn’t create the name Pimatgol. It was conjured up by the people and passed down through the ages,” Lee said.
With a steady flow of passersby, snack shops soon sprung up. They sold, and still sell, snacks like bindaetteok, or Korean bean pancakes.
It’s not clear where the street started and ended, either. “We presume that it went all the way to Dongdaemun, but I figure it ended in Jongno 3-ga [street]. That’s where there were red-light houses filled with gisaeng [female entertainers],” Lee said.
The red-light houses were not brothels. They were places where men could drink with a woman by his side, Lee pointed out.
Lee said he spent much of his youth drinking makgeolli in the rough-and-tumble bars found along Pimatgol.
“During the end of Japanese colonial rule and the democracy movement, Pimatgol was one of the best areas to have a good drink and cheap food,” said Lee. “It was where people gathered to talk about current issues and felt free to be critical and blunt about the government and the ruling classes,” he said.
Lee still frequently visits the street to enjoy a meal. “Many people now in their 40s and 50s still come here to relive old memories,” he added.
The age factor is interesting. You don’t see many people under 40 traipsing down this alley. For one thing, there are no trendy shops or stylish boutiques.
You can start a walk along Pimatgol at a narrow alley next to the Burger King across from the Kyobo Building in Gwanghwamun. There’s a sign that says “Pimat-gol” in bold black letters next to a “sports massage” sign.
If you head east at lunchtime, you’ll see the alley bustling with diners from nearby office blocks.
One of the most popular dishes these days are the grilled mackerel that old ajumma prepare on their tiny restaurants.
“I’ve been cooking fish here for more than 30 years,” said Seok Song-ja, 65. She said her English name is Stone Pine Son.
Seok in Chinese characters means stone, song is pine and ja, son. She runs a small restaurant called Daelim, and warmly welcomes anyone who shows an interest in the neighborhood.
As she tends her grill, a foreigner dressed in a thick overcoat said, “Delicious!” as he paid Seok with a 10,000 won ($10) bill. The old woman returned her customer’s thanks with a hearty laugh.
Three Japanese men walked out of Daelim, saying “Oishii!” which means delicious in Japanese. One from their party was making small talk in Korean with Seok.
“We’ll come back again soon,” he said, handing Seok cash to cover their bill. 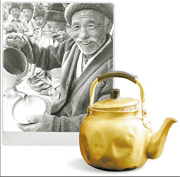 “I’ve seen it all,” she said. “Back in the old days, when customers were young and had little money, they promised to pay later,” she said.
“Some paid, but it didn’t really matter that much if they didn’t,” she went on. “In the past there seemed to be a lot more jeong [affection] and it was a lot more fun. Today people are all about economics. Kids today aren’t as romantic as they used to be.”
Seok said many of her more frequent customers return to Pimatgol because they spent time here in their youth.
“They’re mainly in their 40s and 50s and have children of their own now,” Seok said.
Relationships are tight and the shared history creates a bond. Seok’s even been invited to some of her customers’ weddings.
“They may not be as handsome as they used to be, but they are always welcome in my house,” she added.
What does Pimatgol mean to her?
“It’s where common people live their daily lives and where life is full and cheap,” she said.
As you head east away from the Kyobo Building, Pimatgol appears to end at an intersection. In front of you is Le Meilleur, a highrise housing offices and businesses that towers over Jongno.
To continue, you need to cross over and look for a wooden gate where there’s another sign saying “Pimatgol.”
Once you pass through the gate, you return to more narrow networks of windy side alleys. The walls are crumbling and covered with dirt. Trash litters the ground.
There are motels and signs for oncheon, or hot springs, identifying a public bath.
On the wall of the first building there is a beautiful painting of Korean people in hanbok (traditional Korean clothes) and a puppy.
Once out in the open you’re standing in front of the SC First Bank building standing across from the Jongno Tower. Before crossing the street there is a small square stone marker that reads Uigeumbu.
It marks the site of an old government office that dealt with criminal acts against the yangban.
To proceed, you now have to navigate a swirling sea of parking lots, private education institutes and restaurants. Pimatgol continues behind the YMCA building.
Some people enter this side of Pimatgol from Insadong.
The alley is quiet during the day and it only gets crowded when night falls. It’s easy to miss if you’re not really looking for it.
Along this stretch of Pimatgol, you’ll find a large, neon sign that reads “Pimatgol Jujeo Cheon” (Pimatgol Tavern Village) outside a restaurant. Here people drink makgeolli.
Other establishments close by have closed down, including Gogalbijip, which sold alcohol for five decades before it was gutted in a fire in May 2003.
Numerous buildings were scorched in that inferno. Some stores have been renovated; others have been left derelict.
Moon Tae-gyun sells an assortment of items at a small store near the burned-out Gogalbijip: batteries, camera tripods, rusted irons, key chains, binoculars, Swiss Army knives and shovels.
He’s been here 11 years.
His office is big enough for just one person. Although he’s been running his small shop for a decade, Moon said he’s been living in the neighborhood for 40 years.
“People are leaving because business isn’t good,” Moon said.
“People have changed and the street has changed, too. When I was younger, people came to drink and have a good time. But today’s young people really don’t know about Pimatgol. And they don’t care,” he added.
Moon is thinking of closing up as well, he said as he cast a glance around his dingy surroundings.
“Things are different with the Internet and everything,” he said. “There’s no more human side to business.”
He said he liked the old atmosphere in places like Namdaemun market. Merchants would haggle noisily with customers as they traded goods.
There was a rhythm to the street and an energy that seems all but lost now, Moon said.

The generous sense of goodwill that used to prevail in Pimatgol has been swallowed up in the big city, Moon said with a sigh.
I sat down with Moon in a restaurant famous for sigol jangteo gukbap, or country market rice in soup.
While guzzling down a bowl, a man sitting at a nearby table leaned over. He asked if he could pour me a drink.
“I just wanted to,” said the young man whose face was red from the alcohol.
That kind of brotherly love still exists here, where strangers greet strangers.
But Pimatgol’s days may be numbered. According to Choi Dong-hoon at the Jongno District Office’s Urban Engineering Department, Pimatgol will be redeveloped at some point in the future.
But first the owners of the land have to decide when.
“We have designed plans that will widen the street to 5 meters,” Choi said.
So Pimatgol lives to fight another day, but like so many fascinating places, it’s disappearing beneath a rising tide of change.