[Movie review]‘Cloverfield’: One heck of a thrill ride

[Movie review]‘Cloverfield’: One heck of a thrill ride 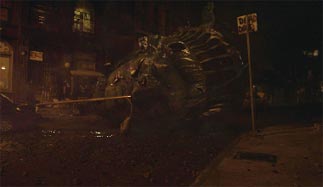 The detached head of the Statue of Liberty in the street startlingly kicks off the struggle against a giant monster in “Cloverfield.” Provided by the company

“Cloverfield” is a traditional monster movie. Its sole purpose is to entertain, with a thin frosting of social commentary. Yet its monster is onscreen for only a small fraction of the film. It has a bold, clever storytelling method that uses the medium in a new, interesting way. This could’ve doomed it to the art house.
But lucky for us, producer J.J. Abrams is a pro at the hype game. Through a mysterious, effective viral marketing campaign, Cloverfield sank its teeth into its intended audience.
The title, we’re told, is a classified U.S. government case name, and this film ― a home movie found in the place “formerly known as [New York’s] Central Park” ― is a piece of evidence.
The film opens with Rob (Michael Stahl-David) and Beth (Odette Yustman), two longtime friends who’ve slept together for the first time. The problem is, Rob is leaving for Japan in a few weeks, so their romance seems destined to end badly.
Later, at Rob’s farewell party, his brother Jason (Mike Vogel) is tasked with taping goodbye messages. Jason delegates this responsibility to Hud (T.J. Miller), Rob’s best friend. Like the all-around insensitive dolt he is, Hud accidentally tapes over Rob and Beth’s blissful footage of a trip to Coney Island.
Suddenly, there is an explosion. Everyone rushes to the roof, only to flee moments later as debris rains down on the building. The film’s iconic image follows: the head of the Statue of Liberty flung onto the street.
Naturally, Beth is trapped in her apartment, and Rob decides to go and save her. What follows is the partygoers’ genuinely harrowing journey through streets packed with soldiers, dark subway tunnels crawling with carnivorous alien spider creatures, and a trip into a collapsed Time Warner Center tower. Hud as narrator is far from omniscient ― he can’t even hold the camera straight most of the time ― which renews the tension in what otherwise would have been just another action film. Our protagonists don’t even know where the monster is most of the time.
The idea of “taping over” the Coney Island video also gives the movie narrative flair: Whenever Hud pauses to replay part of the tape, we get a few seconds “unintentional flashbacks” of incongruous happiness amongst the mayhem.
Abrams, writer Drew Goddard and director Matt Reeves were clearly inspired by the dawn of the YouTube age, when anyone ― even a self-centered, tactless twentysomething with a bad sense of humor ― can become a citizen journalist.
Due to its handheld format, some theaters in the U.S. are actually preceding Cloverfield showings with a motion sickness warning, as if it’s a roller coaster. And like a good coaster, the focus here is on the moments of apprehension before a huge drop.