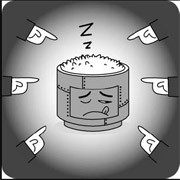 In the TV quiz show “1 vs. 100,” one contestant competes against 100 others. The questions are designed to catch a person unprepared. People who have good general knowledge and excel at mind games rather than expertise usually gain the upper hand.
The quiz show recently aired a special episode that featured people who had passed state-run examinations.
A single contestant was pitted against 50 who had passed the civil service exam and 50 who had passed the bar exam in 2007.
The outcome was a disgrace for the 100.
There was a question in the third round about the main character in Lee Hyun-se’s well-known comic “Alien Baseball Team,” a bestseller which published new editions until early 2000.
Thirty nine panelists failed to answer correctly.
The second round was worse. The question was, “What is the noun for the death of a king?” Twenty-two of the remaining panelists were eliminated because they didn’t know the correct answer: bungeo.
The multiple choice question had other examples such as ingeo and sungeo, which both mean fish in Korea.
Another 17 were eliminated because they failed to answer “ping pong” for the question, “What is the game for two people in which players take turns hitting a ball?”
Those who passed the civil service and bar exam are regarded as the elite of Korea. They will be in charge of fostering national competitiveness as high-ranking public officials.
Even though the quiz show is for fun and exams are for expertise, it is still hard not to laugh at those panelists for getting eliminated for not having such basic knowledge.
Their performance reminds us of the stereotypical image of people studying for state-run exams. They spend their youth cramming for tests and are rewarded with power once they pass.
Japan is currently preparing for reform of its civil service.
A bill has been put forward to end state-run exams and to increase civilian experts to 40 percent of total public servants within 10 years.
The aim is to end the belief that passing the exam will guarantee promotion.
But the evil practice continues in our society. Youngsters pay no attention to current affairs and simply prepare for exams.
Once they are in power, they stay out of the competition, even though the world around them is changing and creative leadership is in high demand.