Chips on shoulders, too?

Chips on shoulders, too? 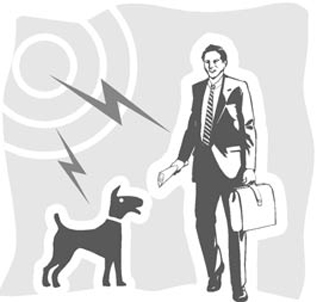 Imagine Gyeongpodae Beach in the summer of 2010. A sunbather is approached by a guard, who confronts him with a garbage bag that has been carelessly thrown away somewhere. The guard says, “The electronic tag on the items in the bag shows it was you who bought them. You must pay a fine of 100,000 won ($110).”
This could actually happen when radio frequency identification technology is used in daily life. Tracking is simple. An electronic chip is loaded with information and attached with a tiny antenna to send and receive information. Data on the chip can be sent and in some models new data can be added. These chips can be inserted into the human body.
The Associated Press reported in July 2004 that the Mexican government had electronic chips inserted in some 160 civil workers, including the minister of justice, prosecutors and police officers. The government said they were for security and identification purposes when the workers enter major information agencies. The chips were products of the U.S. company VeriChip. A 12-millimeter-long and 2.1-millimeter-wide chip were inserted under the skin, using a syringe.
On Jan.13 The Independent reported that the British government was considering using electronic chips as a tool to monitor prisoners on parole. A chip would be inserted in the body and the person could be monitored by satellite wherever they go.
In the United States in 2006, Scott Silverman, VeriChip’s board chairman, maintained that electronic tags should be inserted into the bodies of immigrants living in America. This was suggested when President George W. Bush said that for national security reasons, officials must know who lives in the United States, and where.
A bionic microchip is an advanced version. In February 2002, a research team at the University of California-Berkeley announced that it developed a bionic microchip combining a human cell with an electronic chip circuit. According to a study by a U.S. intelligence agency, the forehead or the back of the hand are good places to insert a semiconductor containing a battery which can be recharged through changes in temperature on the human skin. The Biblical “Book of Revelations” by St. John, while predicting idolatry on the last day, wrote about tags on people’s right hand or forehead. This is the background of a conspiracy theory opposing electronic tags.
The City of Seoul on Feb. 3 announced an ordinance to make it mandatory to plant microchips in pet dogs. This move might start with animals but some day it may include people as well.