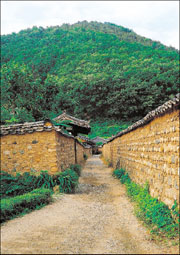 A stone wall that belonged to the Dalseong Mun clans in Daegu.

Documentary photographer Kim Dae-byuk is a specialist at capturing the essence of Korean cultural assets.
Kim’s shots reflect Korean architectural values that stress harmony between nature and buildings.
One such photograph is a shot of a a house in Hamyang, South Gyeongsang, that used to belong to a scholar from the early Joseon Dynasty called Jeong Yeo-chang (1450-1504). The photo captures the villa’s tranquil beauty through the view of a pine grove from the master bedroom.
In another photograph, a shot of a private residence belonging to another Joseon scholar, Kim shows us a distant view of large jars stored in the villa’s backyard behind a stone wall and surrounded by trees. The shot is meant to show how nature harmonizes with food in Korea.
These photos are a part of “Scent of Hanok,” a tribute to Kim set up by his family and friends at ArtSonje in central Seoul.
The works encapsulate Kim’s principles for documenting historical relics and cultural assets. They focus on his photographs of palaces and traditional Korean homes on large prints.
The photographer says deciding what to photograph is often more difficult than the technicality of taking the shot.
Kim, a theology major in college, began his career as a commercial photographer. 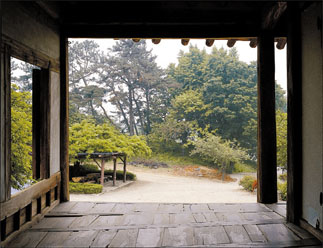 A view of the garden seen from the daecheong maru (wooden floor) at Yunjung Villa in Nonsan County, South Chungcheong. Provided by the organizer

His involvement in cultural heritage began when he joined the royal heritage foundation in 1960. His interest gradually spread to documenting local folk customs and shamanist rituals through stone engravings found in Korean mountains.
He has collaborated with historians and ethnographers on books about Korean relics, including royal palaces, theatrical masks and temples.
The book “Korean Palaces” is a chronology of royal palaces and gardens written by Shin Young-hoon, a master carpenter who designed the Korean gallery at the British Museum in London.
Shin is also the head organizer of Kim’s current exhibition.
The exhibition includes a photograph of “Unjoru,” a heritage villa in Gurye County, South Jeolla, which focuses on the elaborate shapes of the roofs and a bird’s-eye view of the house.
One of Kim’s later works captures a tiny pathway between stone walls against a forest where the Dalseong Mun clan lives in a village in Daegu.
Each photograph reveals hidden references to nature and a spirit that is inherent in all aspects of Korean philosophy.


“Scent of Hanok: Commemorative Exhibition of Kim Dae-byuk” runs through March 5 at ArtSonje Museum. For more information call (02) 741-7441. Kim’s photo book will also be on sale. To get to the museum, go to Anguk Station, line No. 3, exit 1.