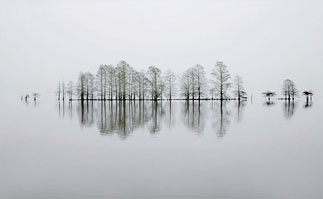 A photograph can sometimes look more real than reality. If you need evidence, take a look at Daniel Lee’s landscapes.
The New York-based photographer tries to capture elements of nature by meditating on whatever sounds he hears amid the silence.
Sounds of waves along the shore, the wind in the trees or an orchestra are a photographer’s tools, suggests Lee in a press release.
A photograph doesn’t depict what is seen from the front but rather how it is seen, he writes.
Lee’s work will be on display at Kim Young Seob Photo Gallery in Anguk-dong, central Seoul, starting tomorrow.
“Landscapes of the Spirit” is Lee’s first exhibition in Korea and will feature 50 of his photographs from the past 30 years.
Lee’s work is better known in New York.
He has held several solo exhibitions, including exhibitions at the Photo District Gallery in Manhattan in 2003 and in Englewood City in New Jersey in 2008.
“In order to make viewers sympathize with the emotions in a piece of art, you need to incorporate the subject from your heart,” he writes.
Lee snaps photos as if he is a painter drawing a picture on an empty sheet of paper or a designer. 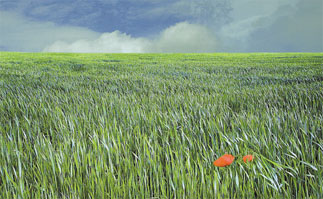 “Wheatfield & Amapola” taken in Spain. Provided by the organizer

He can make a small bird or a thin rose look rough and powerful. He can make a roaring waterfall look soft.
Looking at his pictures creates a serene sense of calm for the viewer.
The exhibition displays photographs that Lee took while traveling, mostly in the United States and other parts of the world.
They include “Bean & Wheatfield” (2004) in Washington State, “Morning Calm” (2005) in North Carolina, “Antelope Canyon” (1999) in Arizona, “Ripple Patterns” (2004) in New Mexico and “Dreaming Tree” (1999) in Utah.
He also includes “Wheatfield & Amapola” (2007) taken in Spain.


“Landscapes of the Spirit” is on display at the Atget Hall, Kim Young Seob Photo Gallery until March 30.
To reach the gallery, go to Anguk Station, line No. 3, exit 6. Gallery hours are from 10 a.m. to 7 p.m, but the gallery is closed on Mondays.
For more information about the exhibition, call (02) 733-6331 or visit www.gallerykim.com.