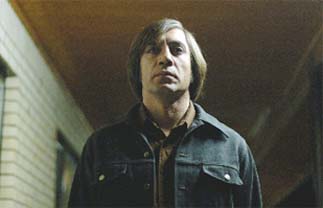 Oscar winner Javier Bardem plays Anton Chigurh, the face of terror in “No Country for Old Men.” Provided by Miramax

During my creative writing workshops in college, my professor would always ask, “Whose story is this?”
I’m not sure how I would answer that question when discussing the film “No Country for Old Men.”
Judging by its title, the story would most obviously belong to the wizened Ed Tom Bell (Tommy Lee Jones), who voices both the film’s opening and closing lines. Yet Ed Tom, a town sheriff on the cusp of retirement, appears in just a sprinkling of scenes.
Another character, Llewelyn Moss (Josh Brolin), gets a large chunk of screen time, but then he’s excised from the entire ending. Llewelyn ― curiously pronounced “Lou Ellen” ― is a hunter who accidentally becomes ensnared in a cat-and-mouse game with a cold-blooded murderer.
The Oscar winner for best supporting actor, Javier Bardem, gives face to the murderer named Anton Chigurh ― which Llewelyn mockingly pronounces as “Sugar.”
Although Bardem graces the screen most, as categorized by his Oscar, he’s a “supporting actor.” But if that’s how we have to see him, I’d say No Country for Old Men either has three supporting actors ― or three lead actors.
The shared motive of survival binds these very different characters. With a coolly flippant attitude toward killing anyone in his way, Anton hunts down Llewelyn and his stolen a suitcase containing some $2 million. Anton will do anything to get his money back and avoid arrest, and Llewelyn will do anything to thwart his pursuer.
On the periphery of Llewelyn and Anton’s bloody battle, Ed Tom must survive in a different way: by attempting, however futilely, to end the carnage the two younger men inflict on his town and across his state.
Toward the end of the film, Ed Tom mulls over his imminent retirement during a conversation with his Uncle Ellis. Stagnating in his filthy trailer, surrounded by his mangy cats, Ellis, also once a lawman, is the picture of Ed Tom’s future.
This scene is the most revelatory part of the film, where Ed Tom finally acknowledges his impotence after the bloodbath Anton has wreaked on west Texas. “I always figured when I got older, God would sorta come into my life somehow,” he says. “And he didn’t. I don’t blame him. If I was him I would have the same opinion of me that he does.”
When the film cuts out just a few minutes later, it just feels unsettlingly unresolved. I can’t exactly say I liked it; can anyone like something that leaves them utterly despondent?
Perhaps this is just my youthful naivete speaking, but I feel like in past, happier times, No Country for Old Men wouldn’t have won best picture. But with a looming recession, an abysmal war and its own increasing global impotence, what else would you expect from America?