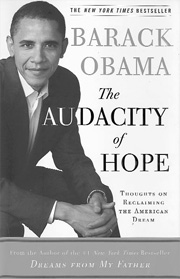 Nearly 70 pages into U.S. Democratic Senator Barack Obama’s “The Audacity of Hope,” I was a bit disappointed. Obama was living up to his reputation as a gifted communicator ― his writing flows as smoothly as his speeches ― but there wasn’t much substance behind his words. Chapters about values and the divide between Democrats and Republicans in American politics were filled with the sort of rhetoric and first-person accounts one would expect from a presidential candidate.
But I’m glad I kept reading.
By the time he began writing about the U.S. Constitution, something changed. Either I was warming to Obama’s style or he switched to topics that he has deeper roots in. He taught Constitutional law for 10 years before running for office.
The same held true for the chapter on politics. Obama writes about his political career, the various campaigns he’s been involved in and the dilemma politicians face every time they vote on a bill that’s loaded with pork barrel spending and compromises.
He finally begins to outline his vision for the country when he writes about opportunity and the rate at which it is disappearing from the American dream.
His three-part plan to making America more competitive in the global economy, which would replace jobs that are being outsourced, involves investments in education, science and technology and energy independence.
To improve education, in Obama’s view, we must offer more challenging courses and extend school hours. We must provide early childhood education and recruit more effective principals and teachers. Obama writes that $100,000 per year is not too much for public school teachers at the peak of their career.
He calls for the doubling of federal scientific research dollars over the next five years. “The total price tag for maintaining our scientific and technological edge comes out to approximately $42 billion over five years ― real money, to be sure, but just 15 percent of the most recent federal highway bill,” he writes.
Energy independence, he says, is directly tied to national security and could be advanced by following Brazil’s example of developing biofuels.
In a chapter called “The World Beyond Our Borders,” Obama relates his own experiences growing up in Indonesia and uses America’s relationship with that country to explore the history of foreign policy.
Because of international norms, most countries in the world will not launch a direct attack on the United States, he says, so “The growing threat, then, comes from those parts of the world on the margins of the global economy where the international ‘rules of the road’ have not taken hold.” Military buildups of the kind seen during the Cold War should be replaced by an investment in manpower so there are enough American soldiers to police “the ungoverned or hostile regions where terrorists thrive.”
But the most effective weapon against Islamic-based terrorism, he writes, “will be not simply a military campaign but a battle of public opinion in the Islamic world.”
In the epilogue, Obama recounts jogging at night along the mall in Washington D.C. His runs sometimes take him to the Lincoln Memorial, where he reads the words of the Gettysburg Address and imagines the crowd listening to the “mighty cadence” of Martin Luther King Jr.
“And in that place, I think about America and those who built it. This nation’s founders, who somehow rose above petty ambitions and narrow calculations to imagine a nation unfurling across a continent. And those like Lincoln and King, who ultimately laid down their lives in the service of perfecting an imperfect union. And all the faceless, nameless men and women, slaves and soldiers and tailors and butchers, constructing lives for themselves and their children and grandchildren, brick by brick, rail by rail, calloused hand by calloused hand, to fill in the landscape of our collective dreams.
“It is that process I wish to be a part of.” The references to Lincoln and King highlight the vulnerability of the most serious African-American presidential candidate in American history.
After reading his book, one can only hope that Obama has as positive an impact on America as the men he mentions, but does not share their fate entirely.