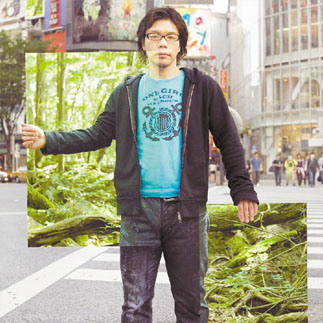 Korean fans have nicknamed Takeshi Hanzawa of the one-man Japanese band Free Tempo the “magician of melody.”
His rhythmic tunes are found everywhere in Seoul these days, from trendy cafes to popular blogs.
Before his recent concert in Seoul, Hanzawa found fame with the song “Sky High.” It was used on a hit Korean drama, “Coffee Prince Branch No.1.”
The band attracted more publicity after popular Korean band Big Bang plagiarized a Hanzawa song.
Following is a recent interview with Hanzawa.

Have you ever listened to “Lies” by Big Bang? That’s the song that was plagiarized.
Yes, I have. [Ironically] I was rather happy because their song seems to have been inspired by my work.

You seem to mix a variety of genres like jazz, bossa nova and so on when you compose a song.
I don’t want my music to be limited to a certain genre. I think my fans love the diversity of my music, which can’t be confined to one genre.

You collaborated with the Korean band Clazziquai. Have any other Korean musicians inspired you?
The female vocalist Shi-un. She participated on my previous album. She’s got a powerful voice and she’s an interesting character.

Is there any reason you don’t sing on the stage?
It’s very important for me to collaborate with various vocalists. That’s why I don’t sing much onstage. After finishing a composition I look for vocalists who fit my music best.

Do you know that you have a lot of Korean fans?
To my surprise, Korean fans respond to my music so enthusiastically. That is the difference between Korean and Japanese audiences. I am very happy that my music has the power to reach people’s hearts and even cross national borders.
What is the philosophy behind your second album “Sounds”?
I am inspired by nature or feelings in daily lives, and I try as hard as I can to convert them into music. I want to express nature with sounds, not just seeing it with my eyes.