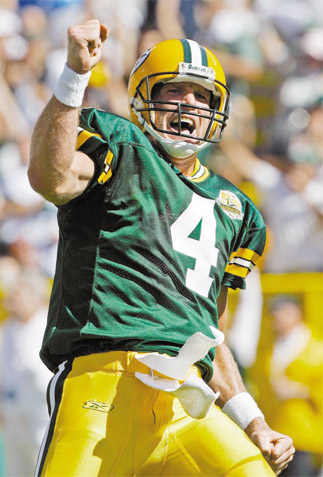 Green Bay Packers quarterback Brett Favre has retired after 17 record-breaking seasons, saying the stress of living up to his high standards had become too much.
“I know I can still play but it’s like I told my wife, I’m just tired mentally,” the 38-year-old told ESPN television on Tuesday.
“Physically I feel O.K. but the stress of studying game film every week has gotten too much and the more stressful it got, well I’m always trying to top what I’d done the previous week.”
Favre’s decision came as something of a shock following one of the best seasons of his Hall of Fame career, as he passed for 4,155 yards and 28 touchdowns.
The veteran had strongly hinted he would return for at least one more season after leading the Packers to a 13-3 record and the NFC title game where they lost to the eventual Super Bowl champion New York Giants in overtime.
“I thought he was going to play on, last week was the first time the word retirement was ever spoken,” said Packers coach Mike McCarthy. “I took Brett’s call last night and he informed me it was time to hang up the cleats.
“He’s mentally tired. I was surprised last night when he told me ― everybody is surprised.”
Favre, who started 275 consecutive regular season and playoff games, broke NFL records in his final campaign for most touchdown passes (442), passing yards (61,655), pass completions (5,377) and games with at least three touchdown passes (63).
“He has had one of the greatest careers in the history of the National Football League and he is able to walk away from the game on his own terms; not many players are able to do that,” said Green Bay general manager Ted Thompson.
“The Packers owe him a tremendous debt of gratitude. He has given Packers fans wonderful memories, a Super Bowl championship among them, that will live forever.”
The league’s only triple Most Valuable Player, Favre led the Packers to the 1997 Super Bowl title and was named to nine Pro Bowl teams.
While Favre’s records, titles and numerous honors mark him out as one of the all-time greats, it was his grit and passion for the game that made the cannon-armed quarterback a fan favorite.
“I know the fans are absolutely devastated,” added Thompson. “The Packers will move forward but certainly we have all been blessed to see this man play this game.
“It doesn’t matter when it comes, two years ago or four years from now, I think the finality of it, all of a sudden it hits you. Brett Favre is not going to be our quarterback anymore.”
Backup Aaron Rodgers will have the unenviable task of filling Favre’s shoes.
The Packers have been slowly grooming Rodgers since they used their first-round pick in the 2005 draft to select the University of California product.
“I spoke to Aaron Rodgers briefly to update him on what was going on and what is in front of him,” said McCarthy. “I think he was a little surprised.” Reuters