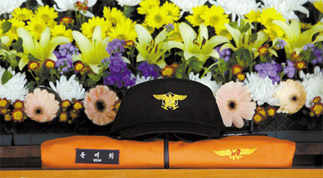 A memorial to firefighter Yoon Jae-hee, 29, who died while fighting the fire at CJ Icheon Factory in Icheon, Gyeonggi, last November. By Kim Tae-seong

When he got the call, firefighter Cho Dong-hwan, 46, was alone on duty. He was just one of two on standby at the Janghang substation of the Ilsan Fire Station.
The blaze broke out at a golf range in Munbong-dong in Ilsan, Gyeonggi, but Cho slipped while carrying a firehose and fell 11 meters to his death.
“We could have saved Cho’s life if we had moved out together,” said Cho’s colleague at the Janghang substation.
Like many substations around the country, there are usually only two firefighters on duty at any one time. They usually split a 24-hour shift.
Lee Kyung-in, a senior officer at Janghang branch, said the lack of manpower was definitely a factor in creating high levels of exhaustion, which could lead to accidents.
“Most fire stations operate on a two-shift basis,” Lee said. “Fire officers are almost always battling fatigue.”
A firefighter from a substation in Gyeonggi, who asked to remain anonymous, said he is mostly on duty alone. He either works from 9 a.m. to 6 p.m. or 24 hours straight, alternating shifts with a colleague.
“You need at least three firefighters to manage a fire properly,” he said. “Naturally, if you are alone, it takes more time.”
If he shows up late at the scene of a fire, he faces a backlash from residents and families of victims, the firefighter said.
“It’s ironic. Our job is to put out the fire, but we can end up causing even more trouble because of our lack of resources,” he said.
According to the National Emergency Management Agency, there are 755 firestations, including substations, in Korea, out of which 104 have only one fireman on standby and 402 have two.
What’s alarming is that there has been a spike in the number of reported fires. In 2006, 4,907 fires were reported, but last year there were 6,698 fires, a 36.5 percent increase.
The agency was unable to offer an explanation for the increase.
The agency also reported that 34.1 percent of Korean firefighters are suffering from various ailments, including chronic backache that prevents personnel from carrying out their duties.
“Firefighters have a tough working life as public servants, but they don’t get the acknowledgement they deserve,” said Kim Jong-tae, 41, who lost a family member ― a fireman ― in 1998.
Kim said he didn’t know much about firefighters and their work until 10 years ago, when a member of his family died in the line of duty.
In response, Kim set up the Fallen Firefighter Memorial Museum, a committee that honors firefighters who get killed doing their job. The committee raises awareness about firefighters’ rights, arguing that they should be equal to police officers and soldiers.
Kim said firemen can now be buried in the state cemetery, thanks in part to the work of the committee.
Other developments include more oxygen in the firefighters’ airtanks, fireproof clothing and more compensation ― a bereaved family typically received 84 million won ($88,788) a decade ago if they lost a firefighting member of the family; 300 million won is now given out, according to Kim.
Despite these improvements, Kim said he feels that the general public is not fully aware of the challenges firefighters face, a problem which will not be helped by the fact that Kim and his committee aren’t running any more projects.
Kim has run out of resources and energy, he said, since the position was just voluntary.

When asked about the apparent lack of manpower, the Seoul Metropolitan Fire and Disaster Management Department said last Wednesday it is planning to enlist 168 new fireman in Seoul this year and make the recruitment criteria much stricter.
Candidates currently need to pass a physical examination that includes a 1,200-meter run, a 50-meter dash, a standing long jump, push-ups and sit-ups.
But from this year, there will be three more tests ― checks for muscular strength, half sit-ups and long runs.
Ahn Hee, a recruiting chief at Seoul Fire Service Academy in southern Seoul, the organization in charge of recruitment and training in Seoul, said candidates who want to be firefighters are not as fit as they should be, and fitness is crucial to the job.
Kim of the committee said the number of new recruits is far too small.
“At least 300 should be hired.”
Jung Yo-an, in charge of finances at Gyeonggi Fire Headquarters, agreed.
He said the lack of firefighters is acute in Gyeonggi, where firefighter Cho died.
Industries and new towns are developing there, which means more manpower is needed to tackle fire accidents.
“We need more men,” said Jung.
But money is the obstacle, according to Ahn. “The number [of recruits] has increased this year. Last year, we recruited 72. Though we want to recruit more, we have a limited government budget.”
Jung Byung-jun, a fire-protection engineer from Sunyang Fire Protection Engineering Company, said the answer to the manpower shortage lies in fire prevention rather than simply hiring more people. 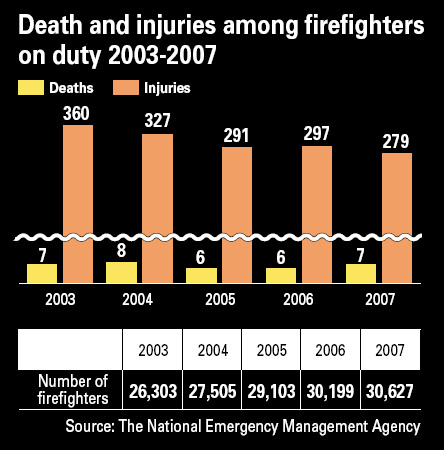 Jung said all buildings need to be certified by their local fire station, and preventive measures such as fire extinguishers and sprinklers must be installed.
“The fire-related laws should be more strictly enforced at the blueprint stage,” the engineer said. Compared to the United States and Japan, Korea’s fire laws are lax, he said.
However, Park Sung-yeol of the agency said the life of a firefighter is improving. He said 34 firemen died and 1,915 were injured on duty between 2003 and 2007. “The average number of deaths has remained similar every year, but the number of injured has in fact decreased,” he said.
Park said the decrease is due to stronger safety regulations as well as reinforced equipment.
“Five years ago, firemen were more focused on putting out fires than worrying about their survival. But we are making headway.”