Luxury sailing on the Han River

Luxury sailing on the Han River 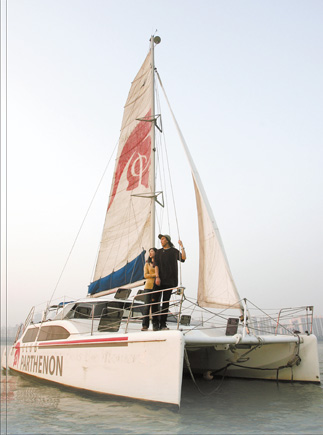 Passengers check if the coast is clear along the Han River from the deck of the cataraman Parthenon. By Kim Hyon-dong

The sleek yacht moored beside the Han River Park in Jamsil is like a house on water.
It’s equipped with a kitchen, shower and bed. Of course, space is at a premium but living on a boat sounds luxurious.
“It’s the ultimate dream of men,” said Hwang Sam-shik, captain of the Parthenon.
Hwang said his boat, a rental catamaran yacht, uses its engines only when moving in and out of docks.
“The true fun in sailing a yacht is to use only the sails and the wind,” he said, steering the vessel gently into open water.
Owning a yacht is a luxury only the rich can afford in Korea and most other places around the world. A catamaran like the Parthenon costs more than a posh car, around 300 million won ($309,000), according to Hwachang, a company that sells high-end yachts.
However, since last year a yacht-for-rent service has made sailing more affordable.
S.M. Yacht Club, managed by Shinhwa Marine Co., (02) 424-5256, rents out yachts along the southeastern stretch of the river.
“When Australians visit us they are surprised at the size of the Han River and just how perfect it is for sailing,” said Hwang, noting that sailing is a hugely popular sport in the Antipodes.
“So the Aussies wonder why sailing isn’t so popular in Korea. The problem in Seoul is that sailing is difficult, especially during the wet summer months, because the tidal waters rise up to 10 meters.”
Sailing is usually associated with warmer weather, except for the round-the-world yachtsmen who brace the Roaring Forties and the Cape of Good Hope. But customers in Korea sign up for sailing all year round, Hwang said.
“But people prefer warmer weather because they can sunbathe on deck.”
Yachting is more than just raising a sail and letting the wind take you, according to Park Gyeong-ja of Shinhwa Marine.
“You can bring your own drinks and food. For people who want to propose marriage we offer champagne, dinner for two and some background music at an additional charge,” Park said.
Costs vary, she said, because an exclusive company handles luxury events. “There are a lot of people signing up to hold birthday parties and other celebrations.”
You don’t have to be a member of the club to go sailing, and you don’t need any previous experience. The captain runs the ship himself.
But you are limited in terms of how far you can sail up and down the river. Some of the bridges are very low.
A one-hour trip costs 200,000 won, and a two-hour trip, 300,000 won. The trip takes you from Jamsil to Cheongdam Bridge.
“If you want to have a more relaxing party, a maximum of 10 people on board is recommended,” Hwang noted.
A popular reason for renting a boat is for a marriage proposal.
“Some of the proposals are so romantic they are hard for me to watch,” Hwang joked.
If you want to pop the big question to your beloved, you will need 380,000 won.
The last boat of the day sails at 10 p.m. as by law all boats must stop operating before midnight. You can make reservations online by visiting the company’s Korean-language site, www.yacht21.com.
Another yacht club, 700 Yacht Club, (02) 376-5616, in Nanji, northwestern Seoul, runs a similar service, but it has a larger roster of yachts to choose from, though.
It has a catamaran yacht named Wilderness, which is equipped with a bedroom, a kitchen, a shower booth and holds up to 12 passengers. The club owns smaller yachts, including the multihull Magnum 21, which allows sailors to get close to the water.
Two hours on Wilderness costs 300,000 won and a five-hour sail, 600,000 won. The smaller boats that hold up to eight passengers cost 200,000 won for two hours. You can make reservations through at www.700yachtclub.com, which has an English-language page.
700 Yacht Club’s marriage proposal event has five different options to choose from and can cost up to 300,000 won.
That means if you include a two-hour cruise your bill could rise to 800,000 won. It’s a lot, but you can comfort yourself with the flowers, wine, finger foods and a framed photo of your beloved taken on the boat.
The Han River is amazingly big, which surprises many foreigners, according to Lee.
“When my sister and I first started this business we knew that it would take some time before Koreans got used to it,” Lee added. It’s a very new sport and recreational pastime here.
“Many of our first members were foreigners and Koreans who had lived abroad who were accustomed to the yachting culture,” Lee said.
“Currently what the Han River lacks is a marina. With a marina infrastructure, I am sure the yacht culture would blossom. There’s a lot of potential here,” she said.
Both Shinhwa Marine and 700 Yacht Club also have annual membership schemes, which can set you back a few million won.
For that kind of money, you get an unlimited number of trips. 700 Yacht Club has more than 50 members,who pay 3.8 million won a year.
The number of private members at Shinhwa is limited to 20 people.

Sailing is just one of the sports that is becoming popular along the banks of the Han River.
The wakeboarding and water skiing season starts April 5.
“The water is still too cold to jump in at the moment,” said Jeong Ho-yeon, a veteran wakeboarder who has been riding the waves along the Han River for the past seven years.
Jeong goes through Picosports, which is located in Jamwon Han River Park in Apgujeong, southern Seoul. 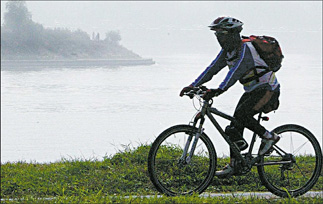 A biker cycles the track along the Han River. [JoongAng Ilbo]

Wakeboarding costs 20,000 won ($20.60) to 30,000 won, depending on the speed of the boat and the wash it creates. The bigger the wash, the more fuel the boat needs. “The prices for this year aren’t out yet,” said Jeong.
“The price is usually set according to gas prices. These days the cost of oil has gone up a lot, which will affect the cost of wakeboarding,” she said.
Last year Picosports charged 50,000 won for a single ride for first time learners.
A single ride takes 15 to 20 minutes and riders can fall down as many times as they want at no extra cost, as long as he doesn’t go over the allotted time.
It’s an addictive sport. “When I started wakeboarding, I couldn’t wait until the season opened,” said Jeong, adding that the faster the boat, the better the wakeboarding.
“Wakeboarding is all about showmanship and showing off your skills to the gallery from the motorboat,” Jeong said.
“If you hire a boat for 20,000 won, you are unlikely to get enough strong waves for a decent performance,” she said.
Water skiing prices are the same for wakeboarding, you just need different equipment.
If you like to be next to the water but you have no desire to dragged down the river by a motorboat, you can opt to stroll along the bicycle track than runs beside the river.
The bicycle track on the south side is 41.4 kilometers long and stretches from Amsa-dong in southeastern Seoul to Gaehwa-dong in southwestern Seoul.
The bicycle track north of the river is 39.3 kilometers long from Gwangjin District to Mangwon-dong in Mapo District in western Seoul.
You can rent bikes at any of the parks along the Han River for about 3,000 won an hour. The rental shops are easy to find.
Or you can just trust your legs and walk. The fuel is cheaper.