From TV ad to social drama

From TV ad to social drama 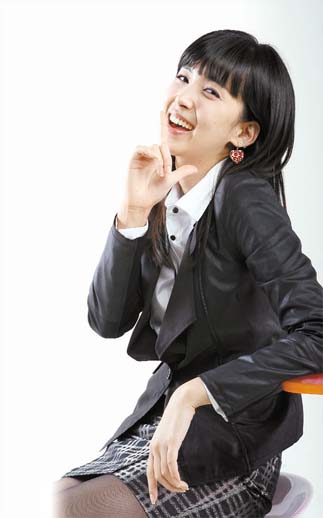 It was not an expected career move.
Model-turned-actress Seo Dan-bi became a household name when she fronted the television ad for KTF mobile phones.
But her latest project was live theater, among a cast of actors with disabilities.
Seo, 23, appeared in “Angels Without Wings,” which was staged at Nowon Art Center last week.
“Working with disabled actors has been a thoroughly rewarding experience,” said Seo.
Since her debut in 2006, Seo has mostly appeared in television commercials, including, most famously, the KTF commercial. The theater show couldn’t be more different.
Her fellow actors are Kim In-mun, 69, and Kil Byul-eun, both survivors of debilitating strokes that affected their movement, and Kang Min-hwi who has Down’s syndrome.
People with disabilities are not in the mainstream of society, partly because of social prejudices, Seo said, but she found that her fellow actors were able to convey a deeper and more diverse range of emotions on stage.
“Disabled actors depict pure emotions in a totally sincere and natural way, whereas other actors have to manipulate their emotions while acting,” she said.
“Each actor is looked upon as a character when they are in front of an audience or the camera, not just in terms of their disability,” she added.
Kang, 26, made his movie debut in Park Heung-sik’s “Bravo, My Life.” The story is about the relationship between a mother and her son.
Kang had to audition eight times to get the part. Since then, he has appeared in three TV dramas, including KBS TV’s “Dalja’s Spring” (2007).
Angels Without Wings, based on Park’s Bravo, My Life, takes place the day after former president Park Chung Hee was assassinated in 1979.
Jae-myung (Kang) plays a teenager with Down’s syndrome. This was a time when the government placed many people with disabilities such as Down’s syndrome in psychiatric hospitals.
To prevent this from happening to Jae-myung, his mother doesn’t let him play outside or make friends. 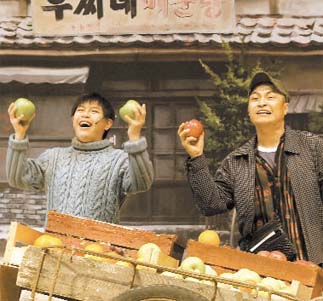 Kil Byul-eun in a scene from the play “Angels Without Wings.” By Jeong Chi-ho

But Jae-myung is a naturally friendly boy and is keen to meet new friends, play ball and hang out.
One day he ventures too far and is caught by the authorities. He is sent to a hospital, and the play ends with his distraught mother praying for a world without prejudice.
Although the play is fiction, it is based on real events.
Seo played the role of Eun-sook, one of the nurses in the psychiatric ward where the government has committed Jae-myung.
“She [Eun-sook] is a daring character. Her landlady begs her each month for the rent, but Eun-sook doesn’t feel any pressure to pay. She doesn’t fear anything,” the actress said.
Seo says she empathizes with her character: They are both optimistic and outgoing and they both face troubles head-on.
Kang had to work hard to learn his lines. He practiced over and over for five hours a day for several months to get them right.
He said the sense of achievement when the play was staged was a huge encouragement for him.
Seo, who is going to appear in a television drama at the end of this month, says she hopes to learn more from experienced actors like Kang, Kil and Kim. She’s new to the craft and has a lot to learn, she admits.
“Disability Awareness Day falls next month on April 2,” Seo said.
“People with disabilities are no different from other people. We should learn from each other and overcome our prejudices.”