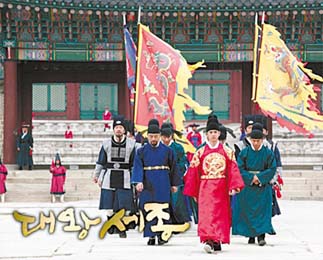 Kim Gu-il is a taxi driver with a 20-year career driving around the city. His four wheels bring home the bacon, send his three kids to school and make him an expert on Korean politics. He keeps abreast of current affairs by listening to the radio all day. I met him when I took his taxi to Itaewon one recent Friday evening, and I found myself impressed by Kim’s knowledge of politics.
The traffic was heavy so we had time to chat, which made the delay bearable, although a little pricey.
His thoughts about the presidency were especially inspiring. “You know, people blame former President Roh [Moo-hyun] for ruining the economy, but look at all the cars filling the streets. There is a mean side in people all joining voices to blame one person.”
Kim stressed he is not a Roh supporter, and went on to share his concerns about the incumbent president.
Admittedly, his discourse was not as sophisticated as Socrates, but he was convincing.
Wrapping up his mini-lecture, Kim said, “I don’t understand why people want to take power. Look at the kings in the history dramas on TV. They all meet tragic endings after grabbing hold of power.”
I later took time to tune into the two most popular historical dramas on the box today ― “Sejong the Great” on KBS-TV on weekends at 9:40 p.m. and “Lee San” on MBC-TV on Mondays and Tuesdays at 10 p.m.
History is the darling genre of Korean TV series. The kingdoms past are steeped in conspiracy, betrayal and love triangles.
In recent months, the genre has found new appeal among viewers by making history relevant to today.
The TV networks and producers have been focusing on reform-minded kings during the recent political season, which has included a presidential race for the Blue House and the debates over the upcoming elections for the National Assembly.
Lee San is about King Jeongjo of the mid-Joseon Dynasty, who is remembered for failed reforms aimed at creating a fairer society.
Last week’s episode featured the king appointing his political enemies to his cabinet.
“My ideal is to seek harmony in government, where we can debate policy pros and cons in an open way,” said the king. This storyline brings to mind President Lee Myung-bak’s cabinet, which has been urging appointees from the former administration to resign.
The title character in Sejong the Great is just a newborn baby in this drama, yet to be crowned. Sejong is perhaps the most respected king in Korean history. He created the Korean alphabet, Hangul, and appointed commoners to high positions in his government, to the chagrin of his higher-born advisers.
No wonder Sejong has been a favorite subject of past historical dramas. In this show, we get an up-close-and-personal profile and see the king as an individual, not just as royalty.
Sejong’s elder brother is still the crown prince. He later gives up the chance to ascend the throne. In last Sunday’s episode, the crown prince lamented, “Everybody covets the throne. But in reality, people do not know that this palace is just a prison that squeezes you out.”
Perhaps Kim the taxi driver and I agree more with the crown prince. A friend of mine, who recently quit his job as a TV anchor for a seat in the National Assembly, would probably disagree.
For my part, I enjoy freedom of speech over the bittersweet taste of holding the reins of power.
Next time you get in a cab and the radio is tuned into a current affairs broadcast, check the driver’s name. Kim makes for a congenial host. He cruises the streets of Seoul throughout the day.