Left to right:: Yonggung Temple; a view of Hanagae Beach on Mui Island; Haesoopia, a hot spring in Yeongjong Island; [JoongAng Ilbo]; Kang Seon-mi, the owner of Adagio, a bed and breakfast on Yeongjong Island. By Park Soo-mee

INCHEON ― Yeongjong Island is often overlooked as simply an airport town.
But its proximity to one of the largest airports in East Asia means it attracts tourists and businesspeople on stopovers or short trips to Korea.
That’s why the population in the center of the island has grown by 7.6 percent in the past four years, according to a report by the district government, an increase that is directly attributable to a business boom following the opening of the Incheon International Airport in 2001.
The rest of the island is packed with quiet beaches, stunning trekking courses and winding bike trails that make for a fascinating day trip or weekend getaway. 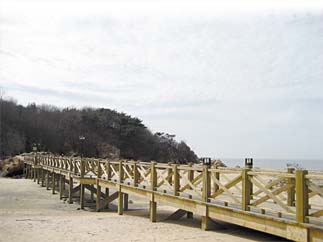 Saturday, 9 a.m., Mount Horyonggok
The name Yeongjong Island is familiar to many people in Korea. Local sports clubs occasionally organize triathlons along the island’s coastal roads. The best trail starts near the bus terminal at the island’s main ferry port. It’s about 20 kilometers (12.43 miles) long and you can rent bikes here for 3,000 won ($2.93).
If you follow the seawall past the village of Geojampo and continue cycling until you get to the airport observatory, you will be greeted by a full view of the airport’s control tower. This is a great spot to watch planes landing and taking off at night.
There are plenty of other outdoor activities to choose from: ocean fishing, golf and rollerblading, to name a few.
I chose a trekking course that starts at Mount Horyonggok on Mui Island, a small islet near Yeongjong Island. The starting point is a 15-minute drive from the airport.
Mount Horyonggok, which rises 236 meters (774.28 feet) above sea level, is known as the “Alps of the West Sea” among local hikers. This is a bit of an overstatement, because even though the views are stunning, the peak is nowhere near as high as the Alps. 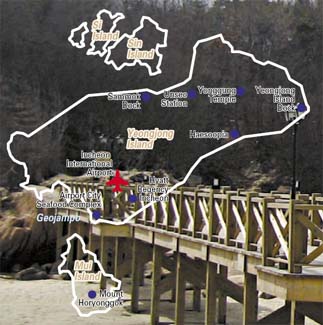 That said, the views are exquisite. A climb to the top of the hill will treat you to lovely views of the West Sea (Yellow Sea) on a clear day. It’s not a tough walk, and veteran trekkers will consider it a quick stroll.
The name of the mountain comes from a legend about a fight between a tiger and a dragon.
To find the start of the trail, catch a village bus from the bus stop near the dock. The bus goes to a small park in the forest, which is located next to the main gateway to the mountain. The bus also goes to Hanagae Beach, a perfect spot for watching the sunset.
This trail will also take you to a white house with a large piano in the garden. You are likely to see crowds of people taking photos here. This is the set for “Stairway to Heaven,” a popular Korean soap opera featuring TV stars Choi Ji-woo and Kwon Sang-woo.
If you climb for 10 more minutes, you will reach “Fantastic Road,” a trail with a jaw-dropping view of the West Sea and the surrounding forests.
With a pine grove on your left and an endless stretch of ocean on your right, you can easily lose all sense of place.
After passing a few landmark rocks, you reach the peak in a little over an hour. Hikers who wish to continue walking can follow a route that leads to Guksabong, the highest peak of Mount Horyonggok, from a three-way junction about halfway through the main trail.
On a clear day, the view from the peak sweeps the entire Yeongjong Island and several small islands plus the ferries cresting the bearded waves.

1 p.m., Seafood
You can stay on Mui Island for lunch, but if you venture just off the dock on Yeongjong Island, you will come across 50 seafood restaurants called “Airport City Seafood Complex.” Typical dishes range from raw fish to seafood hotpots. If you are an adventurous eater, the restaurants offer assorted clams roasted on a grill. A small order (30,000 won for three) comes with a bucket of oysters, mussels, large clams and fresh scallops to die for.
You roast them on a grill until the shells pop open and then dip them in chili sauce. Many restaurants here offer a sidedish of scallops and onions drenched in a spicy sauce mixed with a generous sprinkling of cheddar cheese.
It might not sound so appetizing, but the combination makes for a curiously harmonious blend of tastes.
The idea is to eat as much you can, and give the leftovers back to the cook, who tosses them into a seafood noodle soup. You can also skip the grilling part and get straight to the noodle soup if you want.
The portions are generous: At one restaurant you could almost go for a swim in the food bowls.
The soup is very tasty. The roasted clams are thrown into a fish broth, which is accompanied by a few well-prepared sidedishes.
This gets you ready for your next destination.

2 p.m., Haesoopia
Haesoopia hot spring is a major tourist attraction for frequent travelers to Seoul. They flock to the sauna to relax between flights.
The bad news: sheer pandemonium breaks out on weekend afternoons. The good news: a free shuttle bus whisks customers from the airport to the spa throughout the week.
The quality of water here is different from the Seoul area. Seawater is pumped from deep underground. Favorites here are two outdoor spas infused with seaweed and exotic medicinal herbs.
The best time to visit is when it rains. It’s an indescribable pleasure ― soaking your body in a steaming spa while cold raindrops fall on your head.
Note, though, that there are no towels in the women’s spa. You have to bring your own or purchase one at a store. The management apparently stopped giving out towels because too many got lost. They were either taken home or thrown in the trash after use.

4 p.m., Yonggung Temple
Wonhyo, a monk, founded picturesque Yonggung Temple in 670 C.E. It was then refurbished in 1864. A zelkova tree thought to be 1,300 years old stands on the temple grounds.
Buddhist pilgrims travel through the forest to get to the temple, attracted by its quiet pavilions and religious art.
One of the temple’s greatest treasures is a statue of the Bodhisattva Maitreya, which is 11 meters tall. According to records, a carved gemstone Buddha statue stood inside the main sanctuary, but it was stolen many years ago. But you can see a bronze statue here plus calligraphy said to have been penned by Daewongun (1820-1898), King Gojong’s father.

7. p.m., Adagio
Adagio is a curious departure from seafood and hot springs. It is a bed and breakfast where you can learn Italian cooking. It’s run by Kang Seon-mi, the chef-instructor at the Italian Culinary Institute for Foreigners in Seoul, a local branch of the Italian cooking school based in Turin. She’s joined by her jolly Italian husband, Alessandro Viscontin.
Kang, a former Cathay Pacific flight attendant and native of Yeongjong Island, settled last year near Unseo Station, a neighborhood in the satellite city of Incheon. Houses here conjure up an image of an American suburb.
For dinner, Kang held a demonstration dinner of pasta made with diced prawns, paprika and zucchini in tomato sauce. The wife cooks; the husband sets the table.
The house is very well maintained. You won’t find any lost hairs on the pillows, the bedsheets are spotless and the shared dining room and bathroom are well equipped. Breakfast consists of fresh orange juice, a cappuccino and a basket of bread.
For 30,000 won (cooking class excluded), this is a bargain. A cooking class is an additional 30,000 won with a three-course meal.

9 p.m., Tacky pleasures
This island has been a popular spot for filmmakers for many years, long before the tourists arrived.
“Silmido,” a 2003 blockbuster about South Korean secret agents trained to assassinate former North Korean leader Kim Il Sung, was shot on the island of the same name.
You can find the sets for the movies “The Sad Story” and “Full House” on Sin Island ― both houses overlook idyllic beaches.
All three islands were barren before the movie people set up their cameras. The success of the TV shows has brought in tourists and there are plenty of shops selling posters of celebrity actors.
It’s interesting for 10 minutes or so, but after that it gets overly tacky. But you can’t blame the snappy-happy photographers, reliving their soap opera dreams.
This fantasy island has that effect on visitors.

Transport
To get to Mount Horyonggok from Seoul, take bus No. 306 in front of Gate 2 and 9 at Incheon International Airport. Get off at Geojampo, where the ferry leaves for Mui Island.
Alternatively, take subway line No. 1 to Incheon Station and catch any bus heading to the airport. The bus from the airport to Geojampo leaves every 10 or 15 minutes. Ferries travel between
7:45 a.m. and 5:45 p.m from the dock to Mui Island.
A free shuttle bus runs from the airport to Haesoopia every hour from 9:20 a.m. to 6:20 p.m., except 12:20 p.m.
On weekends, the first bus leaves at 8:20 a.m. The bus leaves on the first level at Gate 14, past the crosswalk on 12C. For more information, call (032) 752-6000.
To get to Yonggung Temple, take bus 202 or 203 at Youngjong Dock and get off at Youngjong Public Health office. For detailed information, call (032) 760-7550.

Food
Bada Nara Hoetjip (032-889-5561) offers a variety of oyster dishes and raw fish on Mui Island. The Airport City Seafood Complex offers a wider choice of dishes and it is cleaner. At Baetgodong (032-751-8361) you can get fair deals on grilled clams, seafood hotpot and noodles.
You could also visit one of many franchise restaurants near Unseo Station or dine at Eight in the Hyatt Regency Incheon. The restaurant is named for the hotel’s eight different kitchen sections, including Korean, a sushi bar and grills.