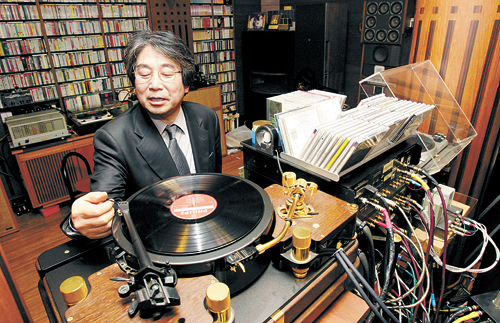 Kim Young-sub shows off a roomful of audio treasures. By Kang Jung-Hyun

The recluse is finally out into the world. Sungkyunkwan University architecture professor Kim Young-sub has written a book called “A Heritage of Audio” that was released on March 10.
Known as a legend of sound among audio buffs, Kim had refused to share his insights as a critic due to his fear of writing.
So what made Kim come out of hiding?
He decided to share his love of sound with others who are in search of the ultimate audio experience.
Engaged in a 40-year love affair with sound, he devoted five years of research, perusing more than 500 books and magazines as well as experimenting with various kinds of audio equipment.
With the publication of his book, the 57-year-old Kim also disclosed the contents of his audio room, which is full of treasures. Considering that he has spent almost half a century with music and sound, it comes as no surprise that he has a room dedicated to top-class audio equipment, a dream come true for sound buffs.
“I realized that there are not many books that illustrate the history of audio, probably because people consider it as a mere hobby,” Kim said.
“Since I’ve been searching for sound for over 40 years, I get a lot of questions from people around me. So I thought why not write a book? I sometimes come across incorrect information in reviews. I wanted to use this opportunity to share correct information that I have verified on my own.”
Kim’s audio room is built in the basement of his hanok, a traditional Korean house. The 33-square-meter (355 square feet) area portrays his sonic quest. It houses a speaker taller than an average adult, an antique phonograph, tube amplifier and turntable. About 20,000 LPs and 3,000 CDs are stacked from floor to ceiling along the walls.
On a recent visit, Kim opened the door to his audio paradise with Beethoven’s Symphony No. 5 in C minor, Op. 67. Just like the musician saying “fate knocks on the door,” the music made the room vibrate with sound. It makes one wonder why he plays his music in such a small space.
“When I listen to music in a confined space like this one, instead of a concert hall, I feel like I’m having a secret encounter with the musician,” Kim said. “For people like me, it’s a remarkable experience to travel back 300 years and meet Bach.”
Kim went on to play from a CD player the live recorded version of the Eagles’ “Hotel California” and Mozart’s Requiem Mass in D minor.
“I believe sound became complete in the 1950s,” he said.
“So that period, I think, is the most advanced in terms of sound. The same goes for music. Musicians and singers of that time lived through the period of wars and death. So it’s impossible to emulate their music and performance which they poured their deepest emotions into. It only makes sense to use the instruments of that time to perfectly revive the music of the golden age.”
That, in fact, is exactly why Kim insists on the old.
“Children today listen to music on MP3 players. It may be convenient, but I’m worried that they will never be able to experience the fascinating sound mankind has created. It may not be passed down to the next generation.”
Thanks to Professor Kim, his family has also become experts in sound. His wife, who is also known to have “golden ears,” and his two children all have their own audio equipment. 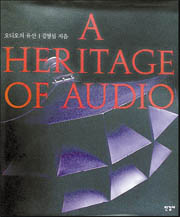 The book, “A Heritage of Audio” by Kim Young-sub

“I think it’s foolish to keep children away from the equipment [it is quite expensive]. My children have freely come into this room and touched the equipment since they were young. Anybody who wants to listen to music has been welcome as we audio lovers like to compare notes.”
Visitors to Kim’s audio room include professional musicians. Violinist Yang Sung Sic has been invited so he can tune his violin in a near-concert hall audio setting. And pianist Lee Hye-Kyung tested the sound in Kim’s room before releasing her record.
Although Kim Young-sub has created an audio room widely recognized by professional musicians, Kim does not believe that the more expensive setting is necessarily better.
“There is no such a thing as a bad instrument. It just isn’t being used right. There is a tendency to be obsessed with price or brand name, but even a very small speaker can make a powerful sound, which sellers obviously will not tell you. If you take time to understand the theory, you will get closer to the essence of sound.”
Kim, who has experienced hearing pretty much everything on top-notch equipment, added, “It’s best to listen affordably and beautifully.”
“I was able to experience a number of good instruments since I was fortunate enough to be able to afford them. But after experiencing what are thought to be the best, I got to know what’s true and false about them. I realized you can create a rich, deep sound without much money. You don’t have to fight with your wife or go bankrupt. I guess if my wife heard me say this, she could go, ‘Yeah, right,’” Kim said with a laugh.
“But I believe good sound comes from harmony. Good sound can never come from a contradictory setting like a huge speaker in a tiny room.”
Coming out of the room, Kim said, “Sound gets mashed with a lot of people in the room. It is absorbed by people’s presence, losing its echo.” Even the slightest change in sound does not go unnoticed by the master’s ears.