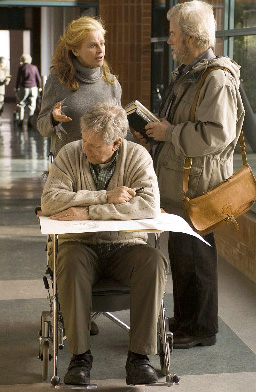 If you cried during “The Notebook,” you’ll sob through “Away from Her.”
While the former was a mawkish teen romance that sugar-coated the reality of Alzheimer’s, the latter is a finely detailed, gritty depiction of how the illness can deflate a marriage and how those involved survive.
Director and screenwriter Sarah Polley presents her adaptation of Alice Munro’s short story about a Canadian man whose wife begins to show early-onset Alzheimer’s. However systematically Polley progresses through her plot, Julie Christie, who plays the afflicted Fiona, reflects such grace in each scene that the director’s moves never seem heavy-handed.
Ever so reluctantly, like Noah in The Notebook, Grant, Fiona’s husband, checks her into a nursing home. Gordon Pinsent plays the still-enamored Grant with quiet fervor, tender yet stone-faced.
In a scene where Fiona checks into her new home, Grant pauses for a moment after parking their truck in the nursing home’s lot, seeking the right words to change his wife’s mind.
But determined to spare Grant the agony of watching her deteriorate, Fiona in all her gorgeous, silver-haired splendor swiftly gets out of the truck and begins to carry her own suitcase into the facility. Grant is unable to do anything but chase after her and take her suitcase himself, a simple act that shows his constant gentility despite his own reservations.
Under strict nursing home rules, Grant is forbidden from visiting Fiona for a month. At the end of the month, Grant realizes that not only has Fiona forgotten him, she’s fallen in love with another married patient, Aubrey (Michael Murphy).
By this point in the movie, the tears are already flowing. Just a simple scene of a house’s lights flicking off gains a new poignant tenor as Pinsent’s low, rumbly voice compares the scene to Alzheimer’s effects on the brain.
Although Grant, also like The Notebook’s Noah, reads aloud to his wife, his devotion takes on a far more realistic dimension as he learns to fit compromise into his marriage.
One particularly moving scene comes as Grant, watching Fiona from afar on a visit, strikes up a conversation with a disgruntled punk teenager visiting a relative. Initially, the teen girl mistakes Grant for a patient, then mistakes Aubrey for Fiona’s husband. But rather than get angry over the girl’s assumptions, Grant remains calmly resigned to reality. Impressed, the girl says something to the effect of, “I only wish someone would do the same for me.”
Away from Her is not a fairy tale about how a husband’s steadfast love overcomes science. Instead, it’s a deeply moving, occasionally hilarious, but consistently realistic account of how two imperfect couples come to terms with debilitating illness.

Away from Her
Drama, Romance / English
110 min.
Now playing