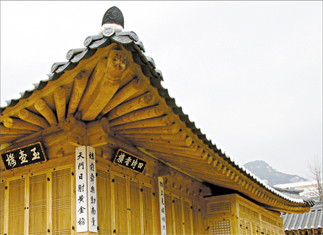 The first electric lights in Korea were installed in 1887 at Geoncheonggung Residence, where King Gojong and his wife Queen Myeongseong frequently slept.
It is highly probable that Myeongseong, also known as Queen Min, stood on the porch of this residence as the grounds around her lit up, signaling a major step forward in Korea’s modernization.
The tragic irony is that eight years later Japanese agents would brutally murder Min on this very spot, an event that helped precipitate Korea’s eventual submission to Japanese colonial rule.
Her death was also seen as a rallying point for anti-Japanese resistance in Korea, an event that was regularly invoked during the subsequent fight for independence through the first decades of the 20th century.
The Geoncheonggung Residence is located within the northernmost reaches of the Gyeongbok Palace complex, which lies in the heart of the nation’s capital.
After fours years of intensive restoration, it was opened to the public last October. For nearly 100 years it had been closed off.

The Geoncheonggung Residence has undergone four years of renovations and it opened to the public last October for the first time in nearly 100 years.

The residence was built in 1873 in the style of a typical scholar’s house. It was originally intended to be a place for storing portraits of the past kings of the Joseon Dynasty.
But Gojong and his wife enjoyed the palace’s peaceful surroundings and spent a great deal of time there.
It was also an ideal spot for entertaining visitors from overseas, especially during the politically tense times of the late 19th century as Korea opened its doors to the rest of the world.
Gojong received visiting state ministers from the United States, Britain and Russia there.
But the history of the residence is overshadowed by the bloody death of Queen Min.
The exact circumstances leading to her death, how she was killed and the disposal of her body are unclear.
A publication that came out last October to coincide with the reopening of the residence offers a comprehensive account of how it was renovated.
“Geoncheonggung: The Last Memories of a Glorious Dynasty” cites several sources, such as recently disclosed Russian and Japanese diplomatic files.
Whether Min was killed inside the residence or in the courtyard is immaterial. The fact is she was murdered there, which gives visitors a spine-chilling feeling when they wander through the gates and around the grounds. 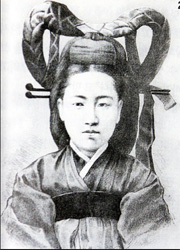 Queen Myeongseong (Queen Min) was murdered by the Japanese in 1895.

Now that the renovations are complete, there is little that looks antique about the structure. The palace had to be rebuilt practically from scratch. The wooden beams have a fresh look; there is no antique aura that usually pervades historic sites.
Still, as I strolled around the complex I found myself hooked on the details of the buildings, especially on the roofs and doors. The curved eaves of the roofs have been lovingly crafted and you can pick up the fresh scent of the timber used to fashion the window panels.
In front of the residence is a pavilion built in a pond called Hyangwonji, which was constructed in 1456.
It’s a beautiful setting and one of the most photographed sites in Seoul. Carp swim in the water and zelkova, maple and pine trees form the backdrop.
The bridge crossing the pond to where the pavilion stands is called Chuihyanggyo, which means “intoxicated with fragrance.” In springtime the name is very apt.
Due to ongoing redesigns, though, the pond is currently closed to visitors.
The Japanese, who wielded enormous influence on the Korean Peninsula, plundered and demolished the residence in 1909. In its place, the Japanese built a modern art museum. which was removed in 1998.
Restoration of the residence started in June 2004, and it has cost some 10 billion won.
There are a number of renovation projects currently under way at Gyeongbok Palace. They are scheduled to be finished by 2009, at which point about 40 percent of the original palace at the height of the Joseon Dynasty will have been restored, according to officials.
“When we completely rebuild the palace, it will be about the same size as China’s Forbidden City,” says Ha Seon-wung, a government official involved in the restoration project.
Several sources are used when restoring or renovating buildings, Ha says, such as “Joseon Gojeok Dobo,” a registry of valuable Korean artifacts.
It was written by the Japanese in order to keep track of Korean national treasures that they wanted to take or took during their rule in Korea (1910 to 1945).
Pictures and plans of buildings are often found in history books such as the “Joseon Wangjo Silrok,” official records of the dynasty.
“It’s like a puzzle. We put bits of information together to get the whole picture, but it’s not perfect,” Ha says. 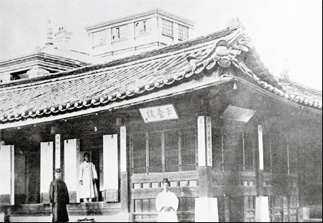 Part of the original residence called Okhoru, where Queen Min is thought to have been assassinated. [JoongAng Ilbo]

If the original Geoncheonggung Residence built in 1873 had survived those turbulent times, we could have enjoyed a wonderfully historic building, Ha adds.
Perfect or not, the residence is rich is significance and historical meaning. Perhaps the very fact that it had to be rebuild should be reason enough to take a look.

If you wish to visit the Geoncheonggung Residence, you can choose one of three tours, booked in advance at www.royalpalace.go.kr. The tours are 11 a.m., and 2 and 4 p.m.
There is no extra admission fee for the residence. Visitors need only pay the standard admission fee for Gyeongbok Palace, which is 3,000 won ($ 3) for adults and 1,500 won if you are below the age of 18 years old.
The palace is open from 9 a.m. to 6 p.m. from March through October, and 9 a.m to 5 p.m. from November through February.
To get to the palace complex, go to Gyeongbokgung Station, line No. 3, exit 5.