Melting ice and the meaning of life

Melting ice and the meaning of life 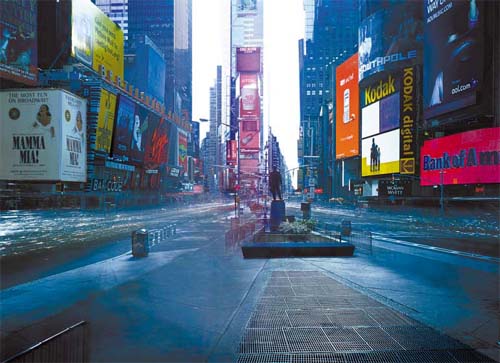 On a recent weekday afternoon, Atta Kim sips his coffee and explains a mysterious event that occurred the night before a performance for his “Ice Monologue” series.
At the time, Kim was close to ending an important phase of this work. He had just finished collecting the melted liquid from his ice carvings of historical figures.
He poured the liquid into another container, which carried water from melted ice blocks upon which the artist had previously projected Buddhist texts and the names of victims from the Holocaust and the World Trade Center attack.
The melted ice was sitting in Kim’s studio ready to be sprinkled over a construction site on the outskirts of Seoul the next day. This was supposed to be a ritualistic way of ending his Ice Monologue series.?
That night, Kim awoke from a nightmare. He went back to sleep, but woke up again, horrified. 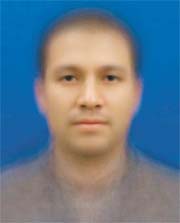 A composite image of men from different ethnic groups in a show called “100 Countries/ 100 Men” that Kim created in 2004. Provided by the organizer

“It was really bizarre,” he says.
With shaved head and horn-rimmed glasses, Kim, 52, stands out from other men his age in a crowd of office workers in downtown Seoul, where his latest show is on display.
“Every person I knew who had died haunted me in my dreams that night. Then I realized that the performance I was facing was more than just a work of art. In a way, I was finally putting their souls to rest,” he says.
The day after the dream, Kim held a ceremony with his staff before the performance of his Ice Monologue series began. He poured the melted ice into 1,000 bowls and threw the liquid over the ground of an empty lot. After he was finished, he felt the tension ease from his body.?
“I realized then that art could heal a wound and even human history,” he says.
After six months, Kim returned to the site and discovered a remarkable scene: a lush carpet of wild flowers covering the entire field.
The art of Atta Kim can be reduced to one simple phrase from his recent exhibition “On-Air” at Rodin Gallery: “All things eventually disappear, but an essence stays.”
The idea defines the vast scale of Kim’s work, which uses photography to question the meaning of our existence and the role a camera plays in our desire to capture fleeting moments of the secular world.
In an attempt to turn his concept into a tangible image, Kim conducted a number of controversial experiments.
In an earlier series called the “Museum Project,” he photographed naked people confined in large transparent boxes as if they were objects in a museum.
Shut inside the see-through boxes were a war veteran who only had one leg, monks, a couple having sex and an ordinary Korean family posing as if for a studio portrait. 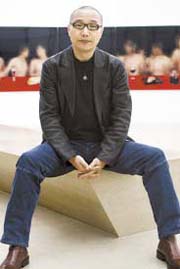 The underlying questions were: Can photography really preserve a moment of history? Can art restore values subdued by ideology, violence, guilt, desire or salvation?
Kim poses a scathing answer in his later works. He hired sculptors to produce ice carvings of cultural icons like Mao Zedong, the Buddha and Marilyn Monroe. He filmed their images as they melted.
The work illustrated Kim’s theorizing: The melted ice was in fact an essence of time and a tangible metaphor of how things disappear and return to nature.
“Watching [the ice blocks] melting in a cold warehouse made me shiver,” Kim says. “The way they evaporated so poignantly captured the notion of existence that I was trying to express in my work, even the thought that they will eventually rise in the air and form rain and snow.”
From the ice series onward, Kim’s works have become more complex, touching notions of Zen, the philosophical foundation he invokes to settle some of the hardest challenges in his works. These concepts involve cultural taboos and political boundaries such as nudity or censorship.
He convinced Buddhist monks, war veterans and university professors to pose naked in his Museum Project, and he was given rare permission to photograph Beijing’s Great Hall of the People after persuading the Chinese authorities that his work delves into a principle of life over ideological debate.
“It's all possible,” he says. “The most important part of my work has always been negotiating, because most of my targets are ordinary people. But it comes down to a dialogue.”
In his latest On-Air Project, Kim photographed some of the world’s busiest streets using time-lapse exposures. The series includes pictures taken at Times Square over an eight-hour period. The final print is a superimposed image of desolate, fin de siecle urbanity, empty streets surrounded by buildings and cars discerned only as passing beams.
The artist employed the same method to develop superimposed images of a soccer game, a couple having sex and the DMZ.
Through the experiment, Kim arrived at an interesting theory: He found that every object disappears according to its own speed of movement.?
His conceptual framework has intrigued the Western art world, as Kim uses photography as a metaphor for human existence and the cycles of life based on Eastern philosophy.
The quintessential example came in “The Last Supper,” the artist’s photographic version of the da Vinci painting of the same name.
The picture attracted an enormous amount of controversy at the International Center of Photography in New York where he held a solo exhibition in 2006.
For the picture, Kim asked each of his 13 models ― one Jesus and 12 apostles ― to re-enact the tableau. He took 65 shots, including one of Jesus playing the roles of his 12 followers and Judas playing the Jesus role and the rest of the 11 apostles. Kim overlapped their images accordingly, and spread them on a table based on the same format as the painting by da Vinci.
The work posed a unique way of understanding a person’s identity in Eastern philosophy, which is always more relational than direct or solitary.
“It was interesting to see the Americans’ reactions,” Kim says of his show in New York. “They seemed to understand the transitory notion of existence in Eastern philosophy and yet wondered how I came to question the basis of Western interpretations of art.”
In his other works, too, Kim is keen on the idea of transcending individual differences and seeking universal values in every man.
In his “100 Countries/100 Men,” he took random photographs of 100 men of different ethnicities and layered their images onto a single portrait to highlight shared elements.

Images from Kim’s “The Last Supper.”

He took the same approach to produce a portrait of a Korean man, which was published in the JoongAng Ilbo in 2004. The answers to his question would vary, but one way of looking at his art is hinted through Kim’s sobriquet “Atta,” which means “a self equals the other” in Korea.”
“The range of my works from the past to the present may look very different on the surface, but in essence stays the same. Every existence eventually disappears, but just because you don’t see them, it doesn’t mean they’ve disappeared,” Kim says.