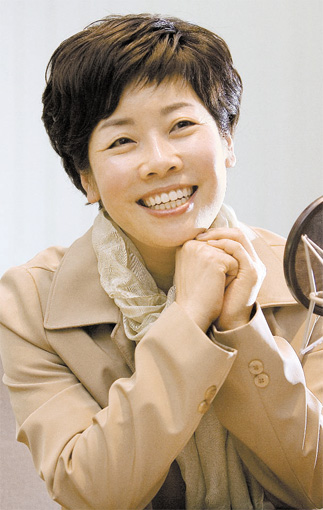 Kim Mi-hwa is seen by some as Korea’s Oprah Winfrey. [JoongAng Ilbo]

Life can be unpredictable.
Kim Mi-hwa never imagined having her own TV talk show.
Since her debut in 1983, Kim has been known as a comedy actress playing wicked old women or bossy wives chasing husbands with baseball bats.
But all that has changed.
Kim, 44, is now Korea’s equivalent of Oprah Winfrey. In addition to hosting current affairs news programs on radio and television, she is also fronting a talk show on OBS TV called “Joo Chul-hwan and Kim Mi-hwa’s Culture War.”
The show started last Friday and airs every day, 10 p.m. to midnight.
A successful woman she may be, but Kim has faced her fair share of windy weather.
She got divorced in 2004 because her former husband assaulted her.
When the story broke, her fans were shocked. Kim tends to play tough characters in her professional life, and the general public found it hard equating the actress on screen with the woman suffering domestic abuse in real life.
Kim was the one who usually held the baseball bat, not the husband.
Last year, she married Yoon Seung-ho, a professor at Sungkyunkwan University. Both had two children from previous marriages.
When the Constitutional Court decided earlier this year to abolish the hojuje, the patriarchal family registry system, Kim asked the Seoul Family Court for permission to change the surname of her two children from Kim ― her ex-husband’s surname ― to Yoon.
The court agreed.
“I feel sorry for my daughters because they got caught up in the media,” Kim said.
Fortunately, Kim’s daughters were understanding. In fact, they were the ones who first suggested changing their names.
Kim’s stepchildren were open-minded about their new family. They refer to Kim as an aunt, which shows how close they feel to her.
“I get permission from my children before I make any big decisions,” Kim said, adding that she worries about her children because she has put them through such hardships.
Kim’s parents had also divorced and her father remarried. She was originally registered as Park Mi-hwa, using her father’s last name.
When her father and stepmother passed away, she changed her name from Park to Kim ― the last name of her birth mother.
But there was confusion when her mother remarried and her step-father’s family name was different.
Kim doesn’t consider herself a feminist, but she took an active role in the abolition of the hojuje system.
The old system was patriarchal. It gave men more rights under the law, and penalized women who divorced.
In her work as a TV show host in broadcasting, Kim says radio listeners and television viewers are comfortable with her persona and performance.
She has hosted MBC radio’s current news program “Kim Mi-hwa, the World and Us” for the past five years.
But in fact this is not the first time Kim has been a talk show host.
She worked on SBS TV’s “Kim Mi-hwa and U” in 2005.
Joo, the head of OBS TV and the co-host of the program, said Kim was perfect for the job.
“We looked for a host like Kim, who could blend humor with serious news.”
He said that Kim’s humor is based on her career experience as a comedian.
“I feel at ease talking with experts,” Kim said, noting that the guests feel comfortable with her. “After all, I am a comedian.”