All the world’s a stage for Korean B-boys.
Korean-American director John Kwon’s “Always Be Boyz” won the Narrative Feature Jury Prize at the San Francisco International Asian-American Film Festival in mid-March.
Meanwhile, Korean American Benson Lee’s “Planet B-boy” picked up the Best Documentary Feature Award and Comcast Audience Award at the festival.
Always Be Boyz stars Maximum Crew, a Korean B-boy group, and depicts an autobiographical story about break-dancers.
Planet B-boy also tracks the lives of world break-dancers based on the 2005 Battle of the Year, an annual International B-boy crew contest in Germany.
The release dates for the two films haven’t been set yet.
Meanwhile, members of Last For One, the Korean B-boy crew in Planet B-boy, are scheduled to appear soon on NBC TV’s “Carson Daly Show” and “The Ellen DeGeneres Show.” 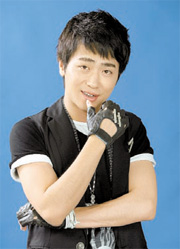 Trot is hot for political parties as lawmakers face the music
Don’t be surprised to hear trot singer Park Hyun-bin’s voice on the streets this week.
He volunteered to sing the official songs of dozens of campaign candidates running in the general elections next week.
The 26-year-old proposed changing the lyrics to two of his singles, “Just Believe Me” and “Shabang Shabang” as an election special.

Neurotic Manhattan foursome might be in town next month
It’s early days yet and it’s best not to get your hopes up, but the four stars of HBO’s “Sex and the City” could be sipping cosmos in Seoul next month.
Taewon Entertainment, the local company in charge of the import, said Sarah Jessica Parker and her crew might drop by before the release of “Sex and the City: The Movie” in June.
Confirmation depends on their schedule for the Cannes Film Festival in May, Taewon said. 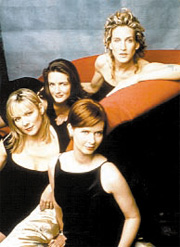 HBO’s “Sex and the City”

Kim Min back in the spotlight as husband’s feature film opens
Lee Jie-ho’s directorial debut crime drama, “The Air I Breathe,” is set for release next Thursday in Korea.
Lee, husband of Korean actress Kim Min, visited Korea from his home in the United States for the film’s press screening last Monday at Lotte Cinema in central Seoul.
Kim also attended.
The Air I Breathe was talk of the town for its Hollywood cast: Kevin Bacon, Julie Delpy, Sarah Michelle Gellar and Brendan Fraser.