Installations reach out for the impossible

Installations reach out for the impossible 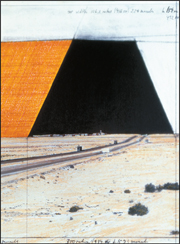 A drawing for “The Mastaba”

For 44 years, the artistic couple Christo and Jeanne-Claude based their collaboration on developing plans to turn their aesthetic vision into massive environmental projects.
Their dream was to see their art made into a real-life installation, and present the viewers with a temporal experience of art.
Their achievements deserve credit. Over the years, the veteran couple has managed to win over fussy authorities in major world cities, negotiated with engineers and won funding to bring some of the most impossible art projects into reality.
Their cardinal success was “The Gates” in 2005: 7,500 metal gates hung with orange flags along 37 kilometers of sidewalk in New York’s Central Park.
In total, Christo and Jeanne-Claude have completed 19 projects together. They are still waiting to obtain property permits or have put on hold other projects, due to delays such as funding and establishing structural issues.
An exhibition illustrating the process of their work is seen in “Two Works in Progress by Christo and Jeanne Claude” at Park Ryu Sook Gallery.
A level of harmony appears to run through their artistic collaboration.
In the exhibition in Seoul, the artists present a series of drawings of two incomplete installations: “The Mastaba,” a landmark project in Abu Dhabi in the United Arab Emirates and “Over the River,” an installation at the Arkansas River on the eastern slope of the Rocky Mountains in Colorado.
The Mastaba, which looks like a pyramid missing its top, will be made of painted stacks of oil barrels, a material that repeatedly appeared in the artists’ earlier installations. 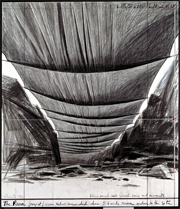 A drawing for “Over the River,” an installation at the Arkansas River in Colorado. Provided by the organizer

In Over the River, a long wave of see-through fabric — about 2.4 to 7.6 meters — will be connected to wire cables on both sides of the river, allowing rafters and kayakers to see the illuminated contours of trees, mountains and clouds through the fabric as they paddle up river.
The Mastaba breaks a critical convention in the evolution of the artists’ work. The piece draws reference to a funerary monument from ancient Egypt, and it will be the artists’ first permanent display.
The drawings on display serve many functions in the artists’ projects. They satisfy practical needs to raise money and provide visual samples of the site investigation, which often includes technical data, fabric samples and an aerial photograph with topographic elevation.
But the scientific details also build an aesthetic layer to the work. Perhaps it’s the underlying illusion for an unborn art.


“Two Works in Progress” runs at Park Ryu Sook Gallery through April 22. On April 5 through May 25 works by Jean-Claude will be on display at the gallery’s branch in Jeju Island.
For more information, call (02) 549-7574.