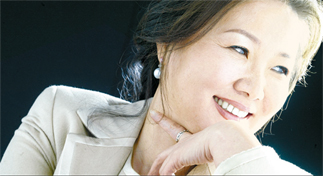 Audiences may as well call actress Kim Hye-sook Everymom. In her many appearances in hit television shows and films, she often plays the role of an affectionate model Korean mother. Even fans in Japan know Kim for her maternal roles.
In “Viva Love,” a film that is scheduled for release next week, Kim, 53, reprises her mother role as Oh Bong-soon. But this time, she won’t be sidelined as a supporting character: Kim’s the lead in this bizarre romantic comedy.
Oh’s life as a landlady isn’t easy, but in the midst of her hard work, she manages to fall in love with one of her tenants. Problem is, Oh’s property is a students’ boarding house and her lover is in his 20s ― and he almost becomes her son-in-law. Anyone else hearing the faint tune of Simon and Garfunkel’s “Mrs. Robinson”?
The film was a challenge for Kim. It wasn’t easy trying to play a 50-year-old woman in love.
“It was mentally and physically exhausting,” Kim said. “I first received the script three years ago, and the content was simultaneously shocking and fresh. In some ways it’s a story that doesn’t make sense in reality and goes against morality.”
Despite the story’s immorality, she said she wanted to take on a new challenge as an actor, which inspired her to take the role. “I felt a sense of duty as a longtime actor,” Kim said.
“Young actors are mostly under the spotlight, and few films have mature actors playing the lead,” Kim said. “It occurred to me that I should take the challenge instead of playing the same roles and show what veteran actors can do through a new character.”
Kim said the most difficult thing was trying to make her character beautiful. “When young people play such a role, they look beautiful to the audience,” Kim said. “But for someone middle-aged, it may look ugly.
“I wanted my audience to look at the character optimistically. So, I started to think in my character’s shoes.”
Kim saw Oh as a woman who has lived a difficult life. She may still be breathing, but she’s completely forgotten about her own existence. She’s even forgotten about her sexuality over the years.
For Oh, her new affair is a romantic reawakening. This love feels like her first, but may be her last. Thus, she’s willing to fight to keep the fiery passion alive.
The Oh role isn’t the only atypical part Kim has taken. In the 2007 film “Open City,” Kim plays an ex-convict who specializes in pickpocketing.
“When I was filming the movie, I was also working on a television drama, ‘Mun-hee,’ and my work schedule was murderous,” Kim recalled. “But I must really love my work. Although I was running around and getting hit all the time during filming because I was a criminal, it didn’t feel all that tiring.
“The worst thing was working out, but I had to train for the scene where I fall to the floor after a detective catches me. I was physically in pain for a week.”
While filming Open City, Kim cut herself using a slim knife her character used to slit open bags. But rather than cover up the cut, she said she wanted to keep the scar. “Every time I feel exhausted, I look at the scar and regain my strength. It is sort of a personal medal,” Kim added.
Kim made her debut in the mid-1970s. “Back in those days, ... I felt like I was treated like an object” Kim said.
Well, judging by Viva Love, now fans will call Kim “Mama” in a whole new way.