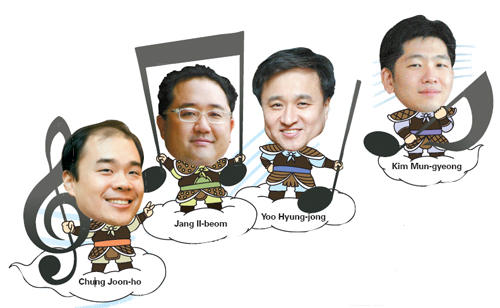 Flowers aren’t the only thing blooming in spring. Classical music courses for the general public are also sprouting up across town.
“The number of people signing up for our classical music class has doubled compared to 2000 when we first introduced the program,” Ko Hee-gyeong, head of education business at Seoul Arts Center, said. “Although the level of the class has become advanced, the classes are always overbooked.”
Currently, four classical music experts serve as the top teachers for such classes, but they didn’t all start off in classrooms. They come from different backgrounds, some from fields completely unrelated to music. However, these men share a passion and in-depth knowledge of music.
So here are our experts:
Yoo Hyung-jong, 47, majored in business at Yonsei University and went to business graduate school at Seoul National University. He worked at the Korea Information Service before quitting in 2006. Yoo gave up his high-paying job just three years after he was promoted.
With early voluntary retirement, Yoo opened a music cafe, MusikBaum, in Apgujeong, southern Seoul.
Yoo’s specialties are opera and ballet. Two years ago he published a book “Bulmyeoleui Moksori (Immortal Voice),” which introduced global opera singers.
Yoo gives lectures at MusikBaum on Wednesdays, with “Story of Singers” at 10:30 a.m. and “Story of Opera” and 2:30 p.m. on Wednesday nights, he teaches “Opera House” at the Sejong Center for the Performing Arts at 7, and “All the Classics” on Friday mornings at 10:30 at Seoul Arts Center.
Chung Joon-ho, 36, is nicknamed “the classical music encyclopedia.” But all that knowledge didn’t come easy. Chung reads extensively about classical music every day.
A one-time German literature major at Yonsei University, Chung quit his job one day as an employee of Daewoo Telecom to become a music columnist. His last steady job was editing Gramophone Korea, a music magazine, three years ago. Since then, he’s been freelancing.
He currently hosts a nightly classical music radio show, “Live Music Recital,” at 8 p.m. on KBS Classic FM. He also gives his “Noon Classic” lectures at the Sejong Center every Tuesday.
Jang Il-beom, 40, headed to Russia after graduating from Hankuk University of Foreign Studies. There, he studied vocal music at the Moscow Conservatory.
Jang travels around the world to attend operas that have gained wide recognition. One week he may be in Barcelona, Spain; the next he could be jetting off to St. Petersburg, Russia.
It’s not rare to spot Jang in Prague. He was recently there for pianist Paik Kun-woo’s recital. He also returns to his college “town,” Moscow, for the Tchaikovsky Concours, the world’s biggest.
Now he hosts a classical music radio show on KBS. He also lectures at the Sejong Center on the fourth Tuesday of every month for the “Afternoon Concert.” You can spot him at Leeum, Samsung Museum of Art, on the second and fourth Thursdays of every month for the 7 p.m. “Thursday Recital.” He’s also at the Goyang Aramnuri one Tuesday per month at the 8 p.m. “Want to Meet Artists?” sessions.
Kim Mun-gyeong, 36, has the most unusual background. As a graduate of Seoul National University’s Medical School, he oversees patents for pharmaceutical products at the Korean Intellectual Property Office.
But he doesn’t just have pills on his mind. Rather, his life revolves around the works of Gustav Mahler.
Musical connoisseurs widely consider Kim the most knowledgeable expert on Mahler in Korea.
Despite his busy schedule at the patent office, Kim travels to Europe once every year to attend Mahler concerts.
Last year Kim traveled to Berlin to listen to Daniel Barenboim conduct Mahler’s Symphony No. 5 and No. 7 and Pierre Boulez conduct Symphony No. 6 and No. 8.
This year, Kim has been giving regular lectures at the classical music store Pungwoldang, located in southern Seoul. Here, you can see he’s not just a Mahler maniac; he also expounds on Franz Schubert in his “My Love, Schubert” lectures on the first Saturday of every month. On the same day, he also hosts his “Symposium Navigator” lectures.