New life for the palace of sighs

New life for the palace of sighs 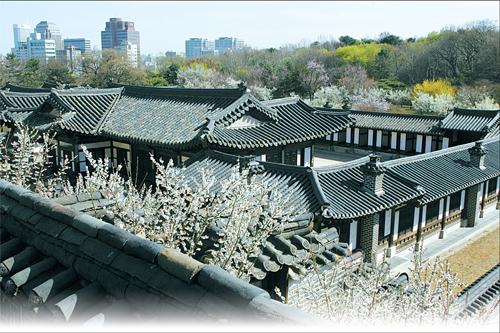 A king’s love for a young girl gave birth to a beautiful residential compound in Seoul’s Changdeok Palace more than a century ago.
When King Heonjong (1827-1849) built the Nakseonjae complex, he insisted his beloved royal concubine have sole use of one of the three buildings. It was an event unheard of in the royal history of the Joseon Dynasty.
Heonjong was 7 when he became king, the youngest in Joseon history. He married Hyohyeon when he was 14, but she died two years later, prompting a search for a second wife.
In an unprecedented move, Heonjong attended the selection ceremony for his wife. He took an instant liking toward one of the three final candidates, Kim Gyeong-bin.
However, following tradition, the king’s mother and other royal clansmen chose the king’s wife. They chose Hyojeong.
Since Hyojeong had failed to produce an heir, Heonjong called in a concubine, another tradition-defying act. It was of course Kim Gyeong-bin, his love at first sight.
The Nakseonjae complex is located in the isolated southeastern corner of Changdeok Palace in central Seoul.
One building was set aside for Heonjong for reading and painting, and the other two, Seokbokheon and Sugangjae, were used by Gyeong-bin and his grandmother, Queen Sunwon, respectively.
Gyeong-bin’s residence was strategically located between the bedchambers of Heonjong and his grandmother, so that she could wait more easily on her master and her master’s grandmother.
“The king’s special love for the residents here can be seen in the details of the buildings,” said Yoon Suk, an information officer at the palace.
“On the walls, tiles and the roof you can see patterns like flowers and turtlebacks, which represent longevity, and calabash and grapes, which symbolize fertility,” Yoon said.
Historians say Nakseonjae best embodies the sadaebu, or the nobility, as does Yeongyeongdang, another building in Changdeok Palace, and Geoncheonggung Residence in Gyeongbok Palace.
“Nakseonjae has a very cozy, feminine feel to it. It is not as domineering or colorful as other buildings in the palace. It is humbly built, without any dancheong, the traditional vibrantly colored patterns usually used for royal decoration,” Yoon explained.
Its traditional lattice doors are executed in many different styles and its railings and walls are carved and patterned with diverse decorative elements, giving them a geometric allure.
Perhaps one of the best parts of Nakseonjae is its rear garden. Mystically shaped stone pots adorn the broad area, and a pavilion at the center used to serve as a sanctuary for the king and queens of Nakseonjae.
In front of the pavilion is a broad stone platform, from where you can look over the city.
A circular stone door called Manweolmun (Full moon-shaped door) on the west leads to another small garden. A wooden door on the far east opens up to another royal palace, Changgyeong Palace.
“When you wander around the complex, you have to pick the right door,” wrote Hong Soon-min, a professor at Myongji University, in “The Story of our Palaces,” published in 2000.
“And when you enter, you don’t want to rush in as though chased. Instead, take your time to study the door and where it’s leading,” Hong explained.
However, Nakseonjae is better known as the tragic setting for the demise of the royal family than for its romantic architectural beauty. This is ironic since Nakseonjae means “mansion of joy and goodness” in Korean. 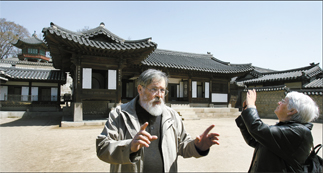 Tourists learn about the history of the Nakseonjae complex. By Won Tae-gyun

Even though the Joseon royal family lost power during the Japanese occupation, Nakseonjae didn’t lose its royal connection.
Several members of the Joseon royal family lived there until the late 1900s, including Princess Deokhye, the last princess of the Joseon Dynasty, who died in 1989, and Lee Bang-ja, the Japanese wife of the last crown prince of Korea, Prince Lee Eun, who died a month after Deokhye.
Their lives at the palace during the second half of the 20th century lacked the glamor and finery that you associate with royalty.
They could not stroll around the palace at will and found themselves confined, trying to avoid the tourists.
“It started with Yun, wife of Sunjong, the last king of the Joseon kings. She lived in Seokbokheon until her death in 1966,” said Yun. “Then in 1963, Prince Lee Eun and his wife Lee Bang-ja returned from Japan.”
Nakseonjae offered them privacy and solitude: They had an exclusive gate to the outside world, granting easier, more discreet access.
After Lee Bang-ja died, the Cultural Properties Administration launched a five-year renovation project to restore Nakseonjae to its former glory.
In 2006 it opened to the public for the first time in history.
“We think Nakseonjae is more welcoming than the Palace of Versailles in France,” said Michele and Patrice Gaborieau, a couple from France.
“Now that we’ve heard about its history, it feels even more special. I feel like someone will come out of the building right now. It’s very moving.”