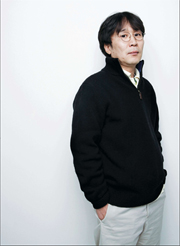 Get yourself ready for a two-hour thriller that takes place among the guard posts on the southern side of the demilitarized zone.
Director Kong Soo-chang is back with his second feature “The Guard Post.”
Kong’s film — released last Thursday — focuses on a mysterious massacre that occurs in the DMZ one rainy day. Twenty armed soldiers at a guard post have been mysteriously killed. One is left alive, but unconscious. 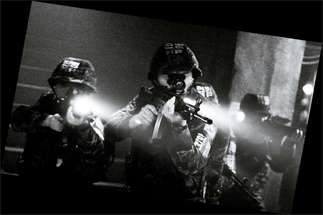 The Defense Ministry dispatches an investigation team. Sergeant Major Noh Seong-gyu (Cheon Ho-jin) is given 24 hours to find the body of Yu Jeong-woo (Cho Hyun-jae), who was in command of the guard post.
Kong’s previous feature, “R-Point,” also takes place in a military setting. It’s about a Korean unit dispatched to the Vietnam War that receives a strange radio transmission from a group of soldiers previously thought missing in action.
“I served in the army under Korea’s military regime,” Kong said. “During that time, the government was in total control.”
Kong was a Korean language and literature major who enjoyed keeping a diary while in the military service. The government constantly inspected that diary.
Kong wanted to share his observations of social irregularities in the army on the big screen.
“Young soldiers are pushed to the limit in the army,” Kong said. “These are stories that go behind the extremes.”
Kong wanted the film to look as real as possible.
“That’s why no female characters were cast — there are no women at the guard posts,” Kong said.
The film’s studio set was created to look as realistic as possible.
Since the guard post is an isolated area, the film crew couldn’t even visit the zone for the film.
But Kong had once visited the post while serving in the military. His assistant director and several members of the film crew had also served in the military at guard posts. To supplement their memories, Kong arranged an interview with a former guard post sergeant and collected information from photos.
“Above all, the scenes had to look real, but I also wanted them to be grotesque and artistic,” Kong said.
Though the film is a mystery thriller the focus isn’t on finding the killer.
Before rehearsals at the studio, the actors fell in two rows, just as in the military.
True to the strict, regimented nature of the military, the film focuses instead on how people respond to life’s limits.
“When writing the screenplay, I wanted Cho [the actor] to be like French actor Alain Delon’s character from ‘Purple Noon,’” Kong said, referring to the 1960 film.
In Purple Noon, which was remade as the 1999 American film “The Talented Mr. Ripley,” Delon’s character Tom Ripley kills his friend, suffers intense mental delusions and begins to take on the dead friend’s persona.
Cho had to similarly delude himself.
Apart from characters and studio setting, Kong was aware of the historic significance of the guard post, which symbolizes the tragic division of South and North Korea.
Kong noted a cut scene from The Guard Post that talked about “a rabbit in a submarine.”
“In the past, people put a rabbit inside a submarine to check how dense the air was,” Kong said.
Rabbits are more sensitive to oxygen than people. Thus if the rabbit died, it meant there wasn’t enough oxygen in the submarine.
Kong explained that the submarine symbolizes the country, and the guard post, a rabbit. In a way, a rabbit in a submarine is like society, according to Kong.
“It could be a logical leap but I wanted to bring out how the guard post is isolated today.”
For Korean youngsters, Kong says, the army is like the guard post.
“It [serving in the army] is a bitter experience. It places a wall between members of society.”
So what’s next on his to-do list?
Kong says he’s involved in a story about the secret service in Southeast Asia.
“There’s no special reason — it [the secret service] has always been a subject I dreamt to depict,” he said.