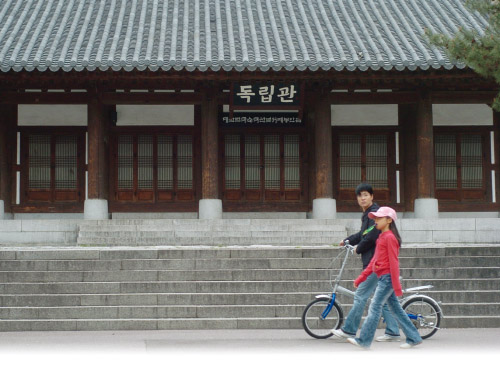 A couple walks past the hall, which is located in Independence Park in Seodaemun, central Seoul. By Lee Ho-jeong

It’s not easy to keep track of the buildings or sites in Seoul that witnessed the events of the Korean independence movement from Japanese colonial rule.
Town planners have destroyed much of what survived the Korean War (1950-1953).
However, the Seoul metropolitan government has rebuilt some key historical structures that represent the spirit of the movement, one of which is Dongnipgwan, Independence Hall, in Seodaemun, downtown Seoul. It’s located in Dongnipgongwon, Independence Park.
The Japanese destroyed the original hall during the colonial period because it had come to symbolize the independence spirit. Korean leaders educated the general public and promoted the notion of Korean sovereignty within these walls.
But the story begins not with a fight to gain independence from the Japanese, who ruled over Korea from 1910 to 1945, but with a movement to free Korea from the mindset that had seen the nation fall heavily under the influence of China for hundreds of years.
The original edifice was built in 1407 during the Joseon Dynasty (1392-1910) and was called Mohwaru. It served as a guest house for Chinese diplomats visiting Seoul, as favored guests whom the Koreans treated with the utmost respect.
Apparently, Mohwaru was never in a very good state of repair. In 1492 King Sejong renovated the place and renamed it Mohwagwan.
Part of the refurbishment included erecting Yeongeun Gate, which was made of rosewood pillars, and positioning a lotus pond on the south side of the building.
Both additions, especially the gate, were meant to bestow further respect on the visiting Chinese diplomats as they entered the fortified city of Seoul.
Chinese imperial envoys continued to use Mohwagwan as a place to stay and for rest and relaxation for much of the Joseon period.
When they arrived on their missions of diplomacy, it was the crown prince’s duty to greet the guests personally at the gate, and stand outside when the delegates left, underscoring Korea’s subordinate relationship to China.
But by the end of the Joseon Dynasty, when Korea’s foreign relations became far more complicated than during the Yi dynastic rule, Mohwagwan fell into disuse as Chinese influence in Korea waned.
After the Chinese lost to the Japanese in the first Sino-Japanese War (1894-1896), Seo Jae-pil, also known as Philip Jaisonhn, founded the Independence Club, along with the nationalist writer Yoon Chi-ho and Syngman Rhee, Korea’s first elected president.
They renamed the building Dongnipgwan, since Mohwagwan reminded people of Korea’s subservient status with the Chinese. 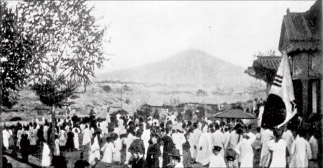 Koreans head to Independence Hall to hear a talk on Korean sovereignty at the end of the 19th century. [JoongAng Ilbo]

The club met in the hall and promoted the notion of Korea’s freedom and nationhood. At this time Japan had not yet formally annexed Korea; that didn’t happen until 1910.
So when Seo and his colleagues organized their talks on Korean independence there at the tailend of the 19th century, they were referring to Korea’s relationship with China.
To underscore their point, the founders of the club tore down Yeongeun Gate, which Koreans regarded as a symbol of their previous deference toward the Qing Dynasty.
Today, two stone pillars of the gate remain, located in front of Independence Gate, which Seo built in 1896, modeled after France’s Arc de Triomphe.
As with the Independence Club, many Koreans today believe Independence Gate is related to the Korean independence movement against Japanese colonial rule.
This is a popular misconception, since Korea was not under Japanese colonial rule when the gate was built.
The gate survived the Korean War intact, but it was moved in 1979 from its initial location to make way for roadworks. It was originally situated 70 meters to the northwest.
The Seoul metropolitan government rebuilt the hall in 1996 as part of its project to set up Independence Park, a project that had been in the works since 1989 but had never taken off. 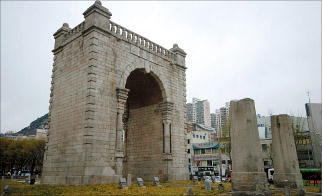 Independence Gate, and two remaining columns of Yeongeun Gate, which reform-minded Koreans tore down at the end of the 19th century. By Lee Ho-jeong

Today, visitors are not free to roam around the building. The doors are usually locked. But inside, if you attend one of the special seminars held there to discuss historical issues, you might catch a glimpse on the ground floor of a stone tablet engraved with the names of 3,000 independence fighters who gave their lives fighting the Japanese.
Near the hall, dotted around the park, are other structures highlighting the spirit of independence. Facing the hall is a monument that commemorates the March 1 movement when in 1919 Korea declared its independence.
The statue depicts Koreans flying the national flag, and the names of the 33 leaders who wrote Korea’s Declaration of Independence, which was made public on March 1, 1919, are engraved on the stone.
A statue of Seo stands among the trees between Independence Hall and Independence Gate. Seo, who spent his last years in the United States, campaigned ceaselessly against Japanese occupation. He died in 1951 in the United States.
The afternoon I visited the hall and the park last week was a beautiful spring day. Kim Do-eun, 11, who lives nearby, was playing under a cherry tree in full bloom. 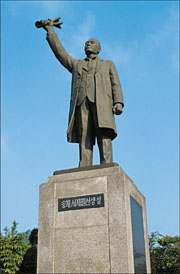 A statue of Seo Jae-pil in Independence Park. By Lee Jeong-ho

“I come to the park a lot but I really don’t know what this building is all about,” said Kim. His interest piqued by my questions, he sneaked a peek through the padlocked wooden doors and then, soon bored, trotted off to join his friends in another part of the park.
As I watched, I saw that most visitors barely gave the building more than a glance, except as a spot to take photos. When asked whether they knew anything about the hall’s history, one young couple posing for pictures just giggled.
To them, it was something picturesque, not one of the spots where Koreans like Seo sowed the seeds of independence among young people keen to see their country break free of its dependence on other nations. 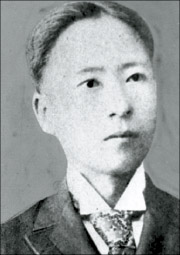 Seo Jae-pil, also known as Philip Jaisohn, was born in Boseong, South Jeolla in 1864.
When he was 7, he moved to Seoul. He passed the royal civil service exam in 1880, and three years later trained at the Toyama Army Academy in Japan.
In December 1884, Seo and fellow reformist Kim Ok-gyun initiated the Gapsin Coup, a failed effort to overturn the old regime and introduce modern ways of economic thinking.
The coup failed because the Chinese intervened. Seo was convicted of treason and went into exile in the United States in 1885. During his exile, Seo attended George Washington University and didn’t return to Korea when Japan defeated China in the first Sino-Japanese War (1894-1896).
On his return, he founded a Korean newspaper, The Independent, and set up the Independence Club along with other reformers like Lee Sang-jae, Yoon Chi-ho and Syngman Rhee, South Korea’s first elected president.
The club was a social-political group that not only insisted on Korea’s sovereignty but also on internal reform.
At first the club’s meetings were limited to debates and exchanges of ideas, but later its members started to take action, such as in 1897, petitioning King Gojong, who was hiding in the Russian consulate, to return to his palace.
Seo’s stay in this country, however, didn’t last long. His radical views offended many conservatives, and the Korean government accused him of trying to overturn the monarchy and expelled him.
In the United States, Seo organized the First Korean Congress, which was held in Philadelphia, Pennsylvania, after he heard news of the March 1 movement in 1919. He also formed the League of Friends of Korea, which financed many Korean independence campaigns.
After Korea won independence, Seo was asked to run for president against Syngman Rhee. But he refused and spent his later years in the United States, where he died in 1951. His remains were returned to Korea and he was buried at the National Cemetery in 1994.