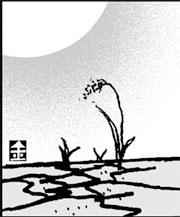 The second hand on the watch swept toward midnight. Someone shouted, “Christ has been reincarnated in a carriage full of flowers in Pyeongtaek!”
The crowd, all in white, shouted in joy. Their nerves taut, they were alert to even the smallest movements. When a moth flew into the TV camera lights, people began to whisper to each other: “All of the things under the sun will be lifted up to the sky.”
The scene aired nonstop on TV. After midnight, we found there had been no Armageddon, no terrible battle that would lead to the total destruction of the world. No one was lifted into the air. The wait for rapture predicted by a Korean church ended with nothing happening on Oct. 28, 1992.
The word “Armageddon” can be traced back to the Greek language. It comes up in the Book of Revelations ascribed to St. John the Divine: “They called kings together to a place named Armageddon.” Armageddon is the site of a final catastrophic battle between the forces of good and evil.
Eschatology, or religious teaching about the end of the world, is back in the spotlight. People say Armageddon will happen in 2012. The Mayan calendar and Nostradamus’ predictions are entangled in eschatology. Some people suggest the Mayan calendar, noted for its precise predictions of planetary movements, gives us a hint the Earth will come to an end in 2012. They cite scientific suggestions that the magnetic fields of the Earth might be reversed in the same period. Nostradamus is a frequent presence in these teachings. A recent re-interpretation of his predictions, discovered in the Roman national library, showed the Earth will be on the road to collapse not in 1999, but 2012. Many books have recently poured out suggesting that the Earth will collide with a large comet or that the Earth, the sun and the center of the galactic system will align in 26,000 years.
Just before the calamity, some people suggest that a few believers will be lifted into the air to enjoy the eternal kingdom of heaven. However, none of such plentiful predictions in the history of humankind have come true.
Now, experts are also actively engaged in shedding light on these claims: No comets will be approaching the Earth in 2012. It is nonsense to assert that the Earth and the sun will align in the galaxy.
Eschatology attracts people’s attention whenever times are troubled. It has resurfaced, along with the U.S. subprime crisis, global warming and food shortages. But our most urgent need today may be to pray for rain. We need to understand that this is not a prediction but a warning.