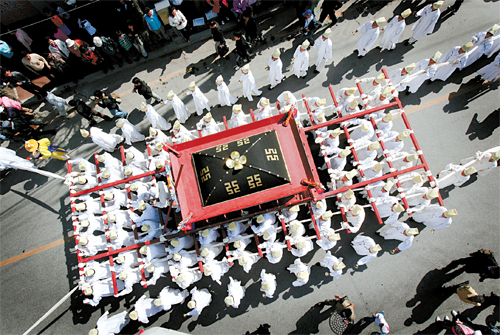 More than 1,000 participants paraded through the streets of Yeongwol during the Danjong funeral rites last year. All photos by Choi Jae-young

YEONGWOL, Gangwon — Every April, ferry boats deposit their cargo of elderly tourists and schoolchildren on a sandy beach on a river peninsula called Cheongnyeongpo here.
For the rest of the year, this remote area is as secluded as an island, virtually unknown to outsiders except for a few rafters in the summer.
If it weren’t for one man, a young king who was exiled and died here six centuries ago, the nearby township of Gwangcheon would have been erased from the country’s tourist maps long ago.
Gwangcheon in Yeongwol County is where Danjong, the sixth king of the Joseon Dynasty (1392-1910), was sent into exile in 1456 when he was 16. His uncle, Sejo, the second son of King Sejong, the inventor of the Korean alphabet, Hangul, dethroned him.
Danjong had ruled for three years before he was escorted to Cheongnyeongpo, which is today virtually devoid of cars. The villagers here barely make ends meet, running lodges and country-style restaurants.
In 1457, the exiled king moved to Gwangpungheon, now a nearby guesthouse, after floods hit Cheongnyeongpo. But his stay there was short-lived. Later that year Sejo uncovered a plot to return Danjong to the palace and he had his nephew and his supporters executed.
Danjong had just turned 17.
To mark his tragic death, Yeongwol has been holding funeral rites for Danjong every April as a main event in the Danjong Festival. This year, the royal funeral starts on April 25 and lasts for three days.
The area around Cheong-
nyeongpo evokes a mystical ambience. In the early morning, mist rises off the river, creating a ghostly mood. A lush pine forest surrounds the entire peninsula, and the tree trunks are tilted in such a way that you could almost draw the shape of the wind with your finger.
According to legend, the trees of the forests here embraced the exiled king, which is why they face Danjong’s residence.
A gravestone, which was restored in 1905, stands directly across from Cheongnyeongpo. It’s inscribed with a poem composed by a government official called Wang Bang-yeon, who reportedly escorted Danjong into exile. Written in 1457, the poem tells how the author returns home from giving Danjong a drink laced with poison. He had been ordered by King Sejo to carry out the deed and now, in the poem, he sits on a hill and grieves over the death for the young boy.
It seems strange that an enticing landscape could ever be considered a place of exile. 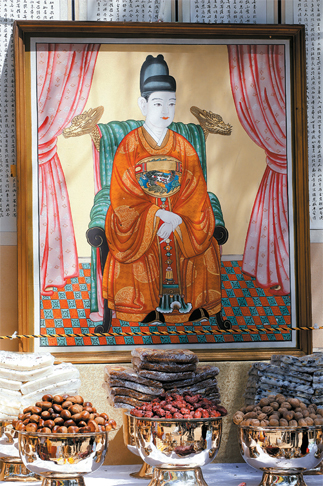 A portrait of Danjong is placed before offerings as part of the memorial rites, top, and above,

“This is such a beautiful and tranquil spot, but it was used to shut a poor young boy from the rest of the world,” says Kim Sin-ja, a housewife awaiting the ferry to Cheongnyeongpo. “There’s an irony given this beauty.”
Another elderly visitor said he had enjoyed watching “Sayuksin,” a Korean TV drama last year about royal officials who were killed when trying to restore Danjong to the throne.
“It’s the same conspiracy we see in Korean politics now,” he says. “Sejo had to get rid of his nephew to get power. It was necessary for him, because otherwise the whole world would realize he rose to power through injustice. The same power games exist today.”
The county started the memorial rites for the exiled king and his devotees in 1967. But the highlight was last year when Yeongwol, which used to be a coal mining area, commemorated the 550th anniversary of Danjong’s death.
The three-day ceremony drew 600,000 people, one and a half times the county’s population, according to the tourism department.
The event reinvigorated the town’s economy. The number of young people in this area has declined, as people have left to seek work in the cities. The schools that have had to close down have been transformed into museums, thus helping the county’s tourist industry.
Economic benefits aside, Yeongwol has shown genuine interest in the life of the abandoned king.
Part of Danjong’s appeal is that he was an orphan, which makes him a highly sympathetic character. Danjong’s mother, Queen Hyundeok, died three days after giving birth, and his father, King Munjong, died in 1452.
“Danjong is the pride of our county,” says Park Seon-gyu, the mayor of Yeongwol County, who organized last year’s ceremony. “This whole area is steeped in the story of the young king’s tragic story, but we take great pride in trying to put his soul to rest.”
The festival this year follows a similar procedure as past ceremonies, but the participants will design costumes to make them more historically accurate.
The night before the main funeral rite, Park will lead a memorial worship in Gwanpungheon, the house where Danjong was executed.
The next day, the crowd will leave the house and carry a coffin effigy on a palanquin through the village to show the dead king the world one last time, a rite from traditional Korean funerals.
After Danjong’s death, King Sejo decreed that he would punish anyone and his descendants for three generations if they tried to bury Danjong.
The curse didn’t stop Um Heung-do, a civilian from Yeongwol, from sneaking into Gwanpungheon with three others and secretly burying the king’s body in a nearby mountain.
In 1698, over two centuries after Danjong’s death, the coffin was moved to its current location in Jangneung, Danjong’s official tomb. 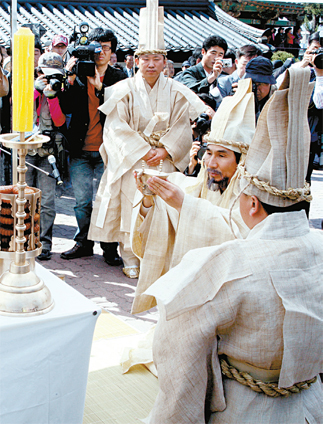 The organizer wants the rites to be as authentic as possible. Historians have used written diagrams from the funeral of King Jeongjo (1752-1800).
During his years in exile, Danjong described himself as “a bird with a grudge wandering around the blue forest” in no-man’s land.
He writes: “A night passes, a night comes… a sun rises, a sun sets, but a grudge lasts forever, late at night when cuckoos stop singing, there is only white moonlight, in the spring valleys the flowers are red as blood; is God deaf? Can’t he hear the sorrowful mind… ?”
The funeral ceremony is held every April as a gesture of condolence from a community that wishes to honor the last days of a young king from the closest distance.

The Danjong Festival runs from April 25 through 27 throughout Yeongwol County in Gangwon Province. The parade starts at 8:30 in the morning on Saturday, April 26 in Gwanpungheon. The crowds will parade for about an hour and a half toward Jangneung, the royal tomb.
During the festival, Donggang Photography Museum (033-375-4554) is holding a black-and-white photo exhibition through June 1, which documents the royal funeral of Sunjong, the last emperor of the Joseon Dynasty. The collection shows a funeral parade, a memorial rite and other rituals in a traditional royal funeral in Korea.
An express bus from East Seoul Bus Terminal to Yeongwol takes about two hours.
For more information call Yeongwol County’s tourism department on (033) 370-2226. 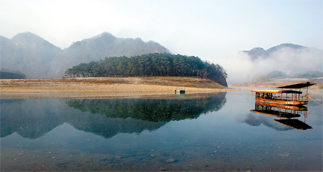 Cheongnyeongpo is a river peninsula in Gwangcheon Township where King Danjong was exiled after he was dethroned by his uncle, Sejo. In the early morning, the place evokes a mystical ambience.