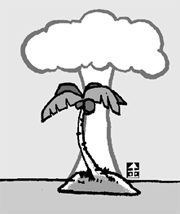 Bikini Atoll is one of many remote atolls and islands that make up the Marshall Islands, north of the equator in the Pacific Ocean. Bikini itself is a ring of 23 coral islands around a lagoon 594.1 square kilometers (229.4 square miles) in size, almost equal to the Seoul metropolitan area.
The name Bikini is derived from the Marshallese word pik, meaning “surface” and ni, meaning “coconut.” As shown in the original meaning of the word, coconuts were abundant in Bikini Atoll. It became known to the Western world for the first time in the 1600s, at the height of Spanish and German exploration. Bikini Atoll was a strategic point under Japanese domination in the early 20th century, and has been under the military protection of the United States since the Second World War.
The United States carried out its first nuclear test on Bikini Atoll on July 1, 1946, and has conducted 23 nuclear experiments there since 1958. When a hydrogen bomb was detonated on the seabed on March 1, 1954, three islands disappeared. A hydrogen bomb in the 15 megaton range — 1,000 times more powerful than the bomb dropped on Hiroshima in 1945 — left a hole two kilometers in diameter and 70 meters deep. The thermonuclear explosion and radioactive fallout sprinkled deadly ash on the soil of surrounding Pacific islands.
The people of Bikini Atoll made homeless by the nuclear tests were relocated to neighboring islands. Fishing was no longer an easy way to make a living. With the coconut trees incinerated, people were on the verge of starvation. Villagers who depended on relief rice from the U.S. Army returned to their hometowns. After researchers found evidence of high pollution, the villagers had no choice but to leave their homes again in 1978.
Recently, oceanologists took an underwater submarine tour of Bikini Atoll. They were surprised by what they saw. Even though humans cannot live on the islands, the divers discovered that the deepwater coral reefs were flourishing. For more than 50 years, the seawater has been helping to disperse the radioactive pollutants.
Bikini Atoll is an exception, though. Coral reefs are dying all over the world because of chlorosis, meaning a lack of chlorophyll, a phenomenon possibly caused by land-based pollutants and a rising sea levels because of global warming.
With time, Japan will overcome the shock of the first nuclear bombing. However, if 6.8 billion people pour pollutants into the seas, the Earth will die.
The coral reefs are showing what is possible.