The world is becoming a very small place, thinks Jon Favreau, the director of “Iron Man.”
“People around the world have essentially the same culture and emotions,” he said, during a promotional event last week at the Shilla Hotel in central Seoul.
Iron Man is the second film to have an Asian junket in Korea — the first was for director Michael Bay’s robot film “Transformers,” last year.
Though the film is set in the West, Favreau said people from every culture can relate to Iron Man.
“The best way to make something universal is to make something specific and personal,” said the director, noting that Hollywood is looking to Asia for inspiration. He cited Japanese manga as an example.
Iron Man, a live-action film featuring Robert Downey Jr. and Gwyneth Paltrow, is based on Stan Lee’s cartoon “Tales of Suspense” (1963) by Marvel Comics Universe, the company that created “Fantastic 4” and “Spider Man.”
The plot for Iron Man goes like this: Millionaire CEO of the world’s largest weapons company Tony Stark (Downey) is forced to build weaponry for a group of terrorists. Instead, he creates a special power suit that he uses to fight evil.
Acting as genius scientist Iron Man was tough, said Downey, who also visited Korea to promote the movie.
“The film was quite challenging but fortunately Favreau was directing it.”
He said his role as Stark was a huge responsibility because audiences today are very savvy. “If we’re towing on the right track, it’s great, but if it sucks people will hate it even before the movie comes out,” he added.
Iron Man opens in Korea next Wednesday, but not until May 2 in the United States.
“Korea is an important market to Hollywood,” the director said. “[Korean] audiences are sophisticated and its film industry is growing rapidly,” he added.
While making the movie, Favreau met with LG Electronics. Favreau, Marvel Studios, Paramount Pictures and LG are marketing partners. LG cell phones appear in the film.
Though the film is science-fiction, Favreau said he’s not a fan of computer graphics. Rather, he’s critical of the overuse of CGI.
The computer graphics in “Jurassic Park” were charming, Favreau said, but when every film company uses the same techniques “there is no emotional connection between the film and the audience.”
Favreau and Downey aren’t the only stars stopping by Korea.
Earlier this year, Taiwanese musician and actor Jay Chou visited Korea to promote “Kung Fu Dunk,” a Taiwanese live-action film based on the Japanese manga “Slam Dunk.”
Last month, leading actors Andy Lau, Sammo Hung and Maggie Q from Daniel Lee’s “Three Kingdoms: Resurrection of the Dragon” visited the country.
Keanu Reeves also visited last week to promote his action thriller “Street Kings.”
Despite the actor’s promotional visit, the film isn’t doing as well as “Taken,” another Hollywood film.
With no large-scale promotional tour, Taken was seen by 216,806 people last weekend, three times the number that saw Reeves’ film. 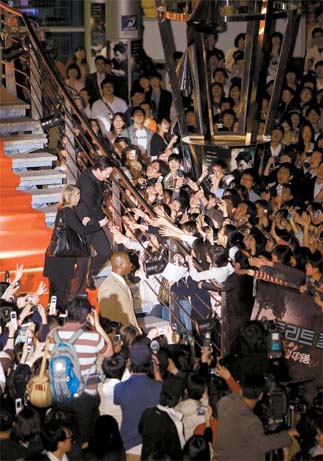