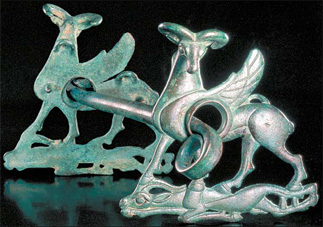 “The Glory of Persia” at the National Museum of Korea is the nation’s first retrospective on works from Persia in such a scale.
Over 200 works are on loan from five state-run museums from the region for this exhibition, including the National Museum of Iran and Persepolis Museum in Shiraz.
The treasures date from 5,000 B.C.E. to the fall of the Sasanian Dynasty in ancient Persia in 651 C.E.
They display typical pieces from early Persian civilization, such as crafts made from gold and decorative vessels, which were mainly produced during the height of the Sasanian Empire.
Plates and vessels make up the majority of the collection.
One silver plate depicts an elaborate engraving of a king, sword in hand, hunting in the wild on horseback.
Later works reveal religious symbols, like the lotus and the cross.
But gold is the show’s highlight.

On display are elaborate ornaments, including a horn chalice from Hamadan, one of the oldest cities in the world, and hand-crafted jewelry.
Also on show are articles related to prehistoric Iranian culture dating back to the origins of civilization, the birth of the Persian Empire, Hellenism and Parthia and the resurrection of the Sasanid Empire.
The organizers have put together a separate gallery on Persian history and culture, which includes giant vessels and tools that stand as ethnic symbols of the Aryan and other treasures from Median Empire.
Some of the exhibit’s most fascinating articles are Persian glasswork and golden swords found in Korea that were previously exchanged between the two countries through commerce along the Silk Road.

An ornamental cup with animal engravings. 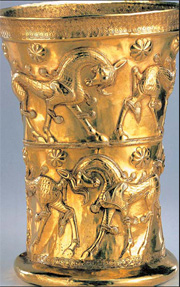 A golden vessel. Provided by the National Museum of Korea