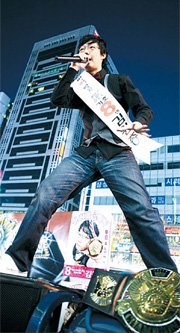 Hip-hop singer Kim Won-jong calls it an 8 million won miracle.
When he ran as an independent in Gangnam District during the recent general elections, he ranked fourth out of seven candidates.
But Kim, 28, got 1,782 votes — he had not expected that many.
Considering he began with just 8 million won ($8,000) in his campaign chest and three supporters, it was an emotional victory. He even got more votes than candidates campaigning under the banner of one of the political parties.
Kim, also known by his stage name “Insane Deegie,” won’t be going to the National Assembly, but he feels he made his point.
“During the campaign, I persuaded many young voters to vote,” Kim said. “I wanted to call attention to the issue of political apathy in Korea.”
Despite his efforts, voter turnout for the April 9 elections was low. According to the National Election Commission, only 46 percent of the registered electorate voted, of whom 19 percent were in their 20s.
“I was driven more by the urge to get more social participation than to win the contest,” the rapper said, up-beat despite the low turnout.
“Artists including entertainers and cultural figures have the right to become politicians,” Kim said. 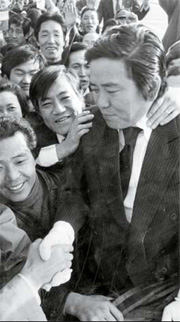 Actor Hong Sung-woo was the first entertainer in Korea to turn to politics. [JoongAng Ilbo]

A politician who is or was an entertainer is called a “politainer,” a term coined by American academic David Schultz in 1999.
“What you publicly voice can vary according to your age and profession. Naturally, as a musician, I use music to express my opinions,” Kim said. “I wanted to make a difference. Being a musician, I thought, ‘Why not use music?’”
He has been preparing his entry into politics since his musical debut in 2001 with the album, “Insane Deegie,” which contained songs that were critical of society, as does his recently released R&B album, “Insane Deegie 2.”
In “Send Kim Deegie to the Assembly,” Kim decries social inequity, the gap between the rich and the poor, and corporate slush funds.
“Housing prices and tax fees are on the rise/ but not my monthly salary/ There are endless complaints here and there/ But no one listens,” he raps.
Some say his political stance is a ruse to sell more albums. “It’s true to some extent,” said Kim. “But definitely I didn’t get into politics just for fun.”
He said he wouldn’t risk his career for no reason.
To run for a seat in the National Assembly, election law prohibits a candidate from any public or media involvement such as broadcasting or writing in newspapers or magazines.
All activities should cease 90 days before the start of election campaigns.
Kim failed to win a seat, but Yoo Jung-hyun, an announcer-turned-politician, won a seat as a Grand National Party lawmaker in Jungnang District, northern Seoul.
He became a politician to improve Korea’s poor state of cultural affairs, he said. Until several months ago, Yoo hosted entertainment shows such as SBS TV’s “Challenge 1,000 Songs” and “New Sunday.”
Yoo said that on average a Korean sees only one or two films a year. “Korea is rapidly developing its technological capability and is becoming politically wise,” the new assemblyman said. “But in terms of performing culture, conditions are still poor.” 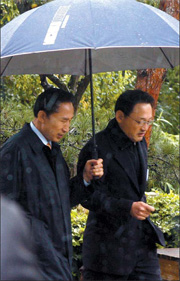 Yoo publicly pledged to revive the hallyu, or Korean Wave, to boost the country’s entertainment industry. “The industry is now lagging,” Yoo said.
However, rapper Kim remains doubtful about the real intentions of many politainers.
“I challenged for a seat but I think many entertainers were simply persuaded by a certain party to stand to make the party look good,” he said.
During the 2007 presidential elections, some 80 entertainers were active in the campaigns in support of President Lee Myung-bak, including Culture Minister Yu In-chon and actor Lee Duk-hwa.
They campaigned for Lee even before internal conflict broke between Lee and former Grand National Party Chairwoman Park Geun-hye.
“It was all image-making,” Kim said.
The history of Korean politainers dates back 30 years to when actor Hong Sung-woo became a lawmaker, running as an independent for the 10th National Assembly. He served three terms.
Later, though, he was engulfed with rumors of a property scandal and he resigned in 1992. Hong is now thought to be working as a farmer on Jeju Island.
Then came Korea’s action star Lee Dae-yeop, who appeared on screens from the early 1950s through the 1970s. Lee served three terms as a lawmaker and he is now the mayor of Seongnam.
Several entertainers ran for seats in the 14th National Assembly (1992-1996) including actors Lee Soon-jae and Choi Yeung-han (Choi Bul-am), actress Kang Bu-ja and the late comedian Lee Joo-il.
The late Lee was unwilling to run for the 15th National Assembly. He wrote in his memoir: “Politics is comedy — I studied thoroughly for four full years.”
After the experience, he expressed skepticism about the political world. Actress Kang also decided against standing again. 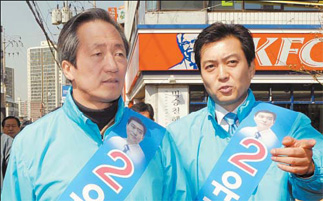 In a press interview at that time, Kang said, “Although I tried my best as a newcomer, politicians had distorted views. They thought my political activities were an extension of my career as an actress.”
Lee Soon-jae said he found the political climate too barren for his taste and quit.
Choi ran again, but he lost to lawmaker Kim Min-seok. After that, he returned to making movies.
Newly appointed Culture Minister Yu In-chon started out as an actor in 1974, appearing in MBC-TV’s hit drama “Jeonwonilgi” (1981) and the musicals “Jesus Christ Superstar” (1997) and “Roman Holiday” (2000). His most recent appearance as an actor was MBC TV’s “Confess” in 2002.
He entered politics after he was first selected as chief director of Seoul Foundation of Arts and Culture in 2004.
At the recent National Assembly elections, former television announcers Lee Kye-jin, Byeon Woong-jeon, Yoo Jung-hyun and Han Sun-kyo all won seats.
Actress Kim Eul-dong was elected as the leader of the Pro-Park party. In her campaign speech, she said her personal vision overlapped with the party’s goals and missions.
“Unlike other entertainers, I will become a loyal politainer,” she said.
Rapper Kim is cautious, though. He said lawmakers should be fully experienced before they are allowed to draw up policies and make laws.
“Before criticizing social irregularities, politainers and politicians should bring up specific alternatives,” Kim said. “Without any [alternatives], politics are of no use.”
Choi Jae-young, a 27-year-old voter, is critical of politainers.
“A politician should be an expert to make policies and laws for the people. Entertainers are very superficial in that way,” Choi said. 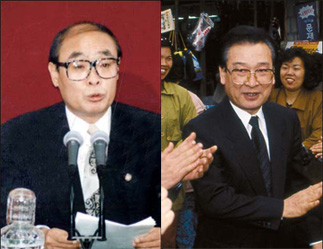 On the other hand, Lee Won-cheol, communications and outreach director of the Pro-Park party, is more generous.
“Actors come in touch with many character roles in films and dramas in their careers, which allow them to acquire different skills, especially the ability to move in different social fields,” he said.
“The entertainment industry has also become more domestically and internationally competitive,” Lee added, noting Korean Wave star Bae Yong-joon and Jang Dong-gun.
“Politainers have the advantage in further developing the culture and arts field,” Lee said.
How this will improve the country in the long run remains to be seen.