Facing the fury: The art of Gim Hongseok

Facing the fury: The art of Gim Hongseok 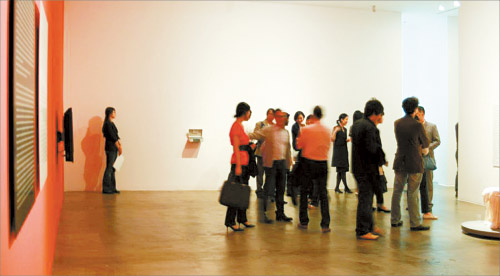 A scene from the opening of Gim Hongseok’s “In through the Out Door” exhibit. All photos provided by Kukje Gallery

The artist Gim Hongseok arrives at The Cafe in Samcheong-dong mildly hung over from last night’s drinking. He looks weary and agitated, finishing his coffee in a few gulps.
Gim has just had a rough week. The media has put him under ethical scrutiny since a controversial performance titled “Post 1945” was played out at his one-man exhibit “In through the Out Door” at Kukje Gallery.
For the show’s opening earlier this month, the artist invited a female prostitute.
He then publicly proposed a deal to the gallery’s visitors. Whoever found the prostitute would get a reward worth 1.2 million won ($1,200) in cash, which was kept in a box screwed to the gallery’s wall.
The kicker was that anyone interested in winning would have to get verification from the prostitute in person, forcing them to go around asking people, “Are you a prostitute?”
Up until this moment, he has endured the barrage of condemnation from local media. But on this ragged morning, Gim suddenly spills an astonishing piece of news that he hasn’t told anyone, not even the gallery curator.
“Actually,” he says, “she was an actor, not a prostitute.”
Suddenly, the tension eases on his face, and he breaks into a modest smile. The cat is out of the bag.

Gim Hongseok’s “Bunny Sofa” is one of two similar pieces by the artist on display at Kukje Gallery.

The competition on the opening night played out quietly at first. Then, about an hour in, a commotion began to spread out from a corner.
A gallery intern had found the “prostitute.” It was a woman clad in a casual outfit of jeans and a blouse. She was with a friend, casually snapping photos of the gallery with her camera phone.
She left the scene immediately after she was discovered. The party was over.
“The ethical standard we have today seems more like a trend,” Gim says by way of explanation for the work. “People seem to adopt an ethical guideline whenever they feel like it helps to clear their conscience. I don’t understand the fuss about my work.”
During a recent press conference before the exhibition began, Gim stressed the difficulty of finding a prostitute who would agree to participate in his performance. The artist told the press that he searched for his candidate in local massage parlors through a friend who knows the industry well.
It will take Gim some explaining before the local public finally gets the humor in his work. For the past week, the Korean media have been far from amused, mostly expressing exasperation at his controversial performance.
“An art opening is such an exclusive event, which not many members of the public have access to,” said one senior reporter of a monthly art magazine who watched the performance from beginning to end.
“There is already a huge detachment if you are not part of the community, and it’s likely to show if you’re an outsider. The work was like a cruel game in that sense.”
Newspapers also covered the work extensively, questioning the boundary between art and ethics.
One daily newspaper ran a report on its society page claiming the woman had run out of the gallery in tears after she was outed. However, many people who attended the performance said the story was dramatized, and that the woman just hurriedly walked out through the crowd.
After the reviews ran in the papers, Gim had to face personal ordeals of his own. He was called into the office of the president of a university where he teaches, and asked to explain his work. He had students challenging him during class for exploiting social minorities in an elitist context. On blogs and in comments on news sites, the issue became one of human rights over art.
The public reaction had apparently perplexed Gim, whose works often play with cultural stereotypes, manipulation and black humor. 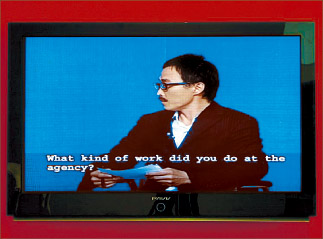 Gim Hongseok as a commentator in “The Talk,” a 2004 mock panel video piece by the artist.

“I am not hurt, but I am just curious what really triggered the controversy,” the artist says. “If I were to guess, I would say it comes down to three things: that it involved money and a prostitute, and that I am a university professor.”
The prostitute issue has taken up most of the limelight, but almost all of Gim’s current series of works at Kukje play with a fictionalized narrative.
For “The Talk,” his 2004 video featured in the current show, he hired professional actors to stage a mock panel about migrant workers in Korea. The entire scenario was made up — the dialogue and the subtitles on screen were scripted, and a foreign panelist was actually speaking in a made-up language. It was really just a Korean actor dressed up in a foreign-looking costume.
In another work from the current exhibit, Gim has what appears to be a person dressed in an adult-sized rabbit costume standing next to a message. The text explains that a North Korean defector is being paid minimum wage to stand inside the costume. The viewer is taken off guard, and forced to summon the willpower to resist poking the costume to see if there is actually a person inside. The artist complicates ways in which people perceive their reality through what they know and what they read.
Gim explains that “Post 1945” was deliberately aimed at provoking the public by reducing ethically deviant behavior into a game. The performance, he says, was titled in reference to the shift in ethics and ideology that began in Korea following the country’s independence from Japanese colonial rule. “There are two instances where news about artists often reaches a public,” he says. “One is when critically acclaimed artists die young. The other is when artists’ works are sold at auction for high prices. I don’t fit into either category.”
There are voices of support for Gim’s work. “Why shouldn’t art fool an audience?” asked art critic Jeong Jun-mo, who is director of Aram Art Gallery and former curator of the National Museum of Contemporary Art. “We love the ‘Mona Lisa’ for its allusion. No one says art should reflect reality. Art is all about deception and satire, and that’s where pathos comes into play.”
Admittedly, Gim has never been treated seriously in the mainstream art scene here. His work fares better in biennials abroad, such as Venice and Istanbul. Perhaps the humor in his works never reached local audiences, whose tastes and ideas of art have always been more serious than playful, more abstract than realist. “I think overall local audiences are just too serious to think beyond,” he says. “The social attitude to art is very serious here.”
The public reaction to “Post 1945” poignantly describes the lack of connection between Gim and the local audience.

So far, no one has asked if the prostitute was an actor, Gim says, although a few art critics came up to him during the opening night and questioned him whether he had actually invited a prostitute in the first place.
Gallery officials were also not aware that the prostitute was an actor. A gallery spokeswoman politely declined to provide the contact information of the intern who found the supposed prostitute at the opening. She added that the intern had regretted having asked the prostitute who she was after she got the reward.
Another gallery official is puzzled as to why no one suspected the situation could have been fabricated.
“The possibility was always there,” says Lee Sabin, the curator of Kukje. “But there was no one really questioning whether it could’ve been made up. There will be a certain degree of disappointment among the public when the news spreads, but I think the artist’s point will get across.”