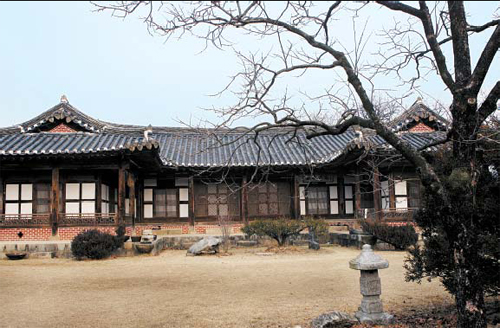 The Seon clan of Boseong that Kim Jeong-ok married into ruled the area of Goheung in South Jeolla toward the end of the Joseon Dynasty.
After the Seons made a fortune as merchants, they built a clan house in its current location near Mount Sokri in Boeun County, North Chungcheong.
The house has 99 kan (rooms), and another 33 rooms were added later. It is one of the nation’s largest antique houses, and one of the few remaining yangban houses. Its historical merit draws hundreds of tourists and students on field trips.
The house didn’t exist for the clan alone.
The family, who believed that “pursuing good is the ultimate joy,” set up a free school called Gwanseonjeong and raised many bright students. Noted Korean scholars like Lim Chang-soon and Byeon Si-yeon once studied there.
The tradition continues to this day. The house includes a guesthouse where students can prepare for government exams.
More than 1,000 students studying for bar exams have spent time in the house.
In gratitude for the Seons’ contributions, villagers have put up a stone marker. It says the family “distributed land to farmers, paid their taxes and helped the poor.”