Island paradise is an English garden

Island paradise is an English garden 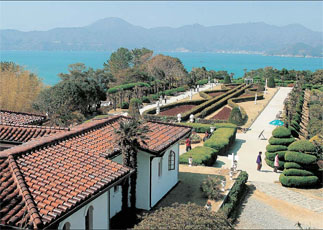 The sunken garden on Oe Island

OE ISLAND, South Gyeongsang — In many ways Oe Island is riddled with metaphors of fantasy. It’s an island, far from the desires of worldly affairs that dominate the minds of urbanites.
It’s got all the Victorian illusions of grace and wonder that many Koreans associate with a paradise. There is a scenic garden, flower-strewn arches and ivy statues of Venus that adorn the island’s pathways.
If you walk further up into the hills, there is a stone ladder called “Stairway to Heaven” leading up to the cliff overlooking the sea, and a house with an impossible view. It was here that the main lovers from the hit TV drama “Winter Sonata” had their tearful reunion. 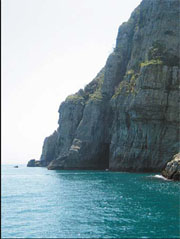 A view of Haegeumgang from the ferry.

But fairytale illusions aside, the most inspiring part of the island, which is about 4 kilometers from Geoje, the main town on Geoje Island in South Gyeongsang, is the garden
It’s owned and maintained by Choi Ho-sook, who together with her late husband Lee Chang-ho, bought Oe Island in 1972, using most of their savings.
The two schoolteachers had never been to an authentic English garden before the place opened to the public in 1995.
They built their garden paradise from scratch over the past two decades using nothing but their imagination.
There is more to the secret irony of this island’s beauty. The sunken garden on the central island where the Venus statues stand was once a pig farm.
“It helped that we’d never been to Europe before we created our own garden,” says Choi. “If we had seen a real one, we wouldn’t have had the courage to mimic the original.”
It was by artful coincidence that Choi and Lee discovered this remote island 36 years ago.
One day, Lee came to Geoje Island for some fishing. The weather turned bad while he was on the water and he was forced to seek shelter from the heavy rain on the closest island: Oe.
Six families were residing there with no electricity, making a living through fishing, collecting seaweed and farming sweet potatoes on the island’s slopes. They all dreamt of moving to the mainland, and they eventually did.
Intrigued, Lee returned months later with his wife and they bought the island, excited about the possibilities.
During the first year they planted 3,000 mandarin orange trees, but a typhoon ruined the crop. Next, they tried their hand at raising pigs. That, too, failed when the bottom fell out of the local pork market one year.
That was when they resorted to their last hope: to build a garden.
The motif is pan-European. Choi, who was raised near a U.S. military base in Yangju, Gyeonggi, kept stacks of American magazines that soldiers in her village had thrown out.
One of the pictures she had saved was of an English garden. Later she came across a gardening book in a book shop in England and realized the picture was of a garden in Buckingham Palace.
At the Oe Island garden, the view from the deck is reminiscent of a Mediterranean village. The sea lies in the background and white houses on the cliffs have terra-cotta roofs. As you walk across the hills, you see that one garden leads to another.
Cacti lead to camellia seeds and a garden of magnolias and Indian lilacs are bound by tropical trees and cypresses. These paths eventually lead to a sunken garden where visitors take snapshots in front of the Venus statues.
For a place maintained by eight full-time gardeners, the crafted shape of the trees and flowers is a sheer wonder. The artifice mingles superbly with the natural surroundings and the view over the sea from the highest point on the island is overwhelming. 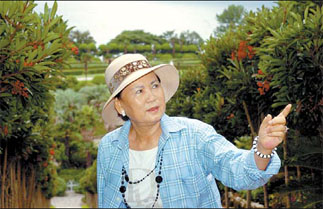 Perhaps I was lucky.
From now through June is the best season here. On a clear day, you have an open view of the vast sea and the surrounding islands of Tongyeong.
There are nearly 60 islands adjoining Geoje Island; Oe is just one of them. But the weather doesn’t always stay like this.
The island’s ferry, which leaves from Gujora Port, doesn’t run for an average of 90 days a year. The weather is unpredictable and violent. Occasional typhoons have turned the island into a complete wreck in the past. In 2003, the year Lee died of a stroke, Typhoon Maemi struck the coastal areas, destroying most of the island’s trees and flowers.
But the unlikely idea of an English garden in the far end of the peninsula draws a million curious tourists a year. The experience for most people is like visiting Disneyland.
On a ferry to Oe Island, the sound of bbongjak, a type of old Korean pop music, is loud enough to raise the roof. Some revelers are happily drunk, asking the people at the garden entrance for a bar where they can get more soju. Unfortunately for them, the island’s restaurant doesn’t stock much in the way of alcohol.
Most visitors here take the ferry that travels through Haegeumgang, which means “a diamond in the sea.” It was named to parallel the scenic view of Mount Kumgang in North Korea.
Haegeumgang is a rocky island where you can see Lion Rock. The sun and moon are said to set on the same spot here. On top of the rock, there is a small pine tree, which is thought to be 1,000 years old. 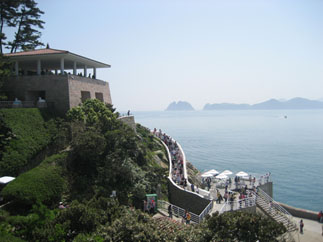 The view of an observatory on Oe Island overlooking the sea. Photo by Park Soo-mee

Legend says that a Chinese government official during the Silla Dynasty came here with 1,000 servants and climbed the rocky cliffs to pluck an herb of eternal youth for Emperor Qin Shi.
They were so mesmerized by the view that they hung a swing between the rocks and left a note in Chinese saying “A man has been here.”
The old writing was washed away in a typhoon in 1959.
As the ferry circles the island, passing an old cave in the shape of a cross, it docks against a beautiful backdrop that no storm could ever fully erase.