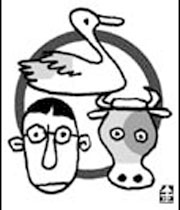 Guangdong Province in southern China is one of the most densely populated regions in the world. More than 1,300 people per square kilometer live around the Zhujiang River (Pearl River) Delta. It is also one of China’s three largest producers of poultry. The population of domesticated birds raised for meat and eggs exceeds more than 0.7 billion. It is natural that people there have physical contact with birds more often than anywhere else in the world. In crowded traditional markets, germs and other disease-causing organisms are exchanged between people and animals.
The H5N1 virus, which in recent days has continued to spread in Korea, was first detected in a goose in Guangdong in 1996. In the fall of the following year, H5N1 spread like wildfire through local poultry farms and markets in neighboring Hong Kong. At that time, people as well as poultry were infected with this virus, an indication that it had crossed the species barrier.
Lee Jae-dam, dean of Ulsan University Medical College, explained: “From a genetic perspective humans, birds and cows are animals that are far apart from each other. There exists a high species barrier between the two.”
Before farming began, there were clear distinctions between infectious diseases in animals and people. Infectious diseases spread from cow-to-cow or human-to-human. However, zoonotic diseases, or animal diseases that can be transmitted to humans, appeared when humans domesticated animals. Zoonotic diseases are caused by infectious agents that jump the species barrier. They account for 75 percent of 1,700 infectious diseases that can be spread to humans. Experts say that major culprits behind the rapid increase in the number of new zoonotic diseases are urbanization, trade in wild animals, livestock farming and the various pets that humans keep.
As pathogenic organisms from animals cross the species barrier and are transmitted to humans, they are dreadfully virulent at the outset. Humans have no experience of them and thus become vulnerable due to lack of immunity. However, with time, the organisms weaken. Viruses become even weaker, mainly because as the virus kills its human host, it destroys itself. When HIV from chimpanzee SIV was transmitted to humans, it was widely regarded as a straight path to death. However, it has become a manageable disease.
Kim Hyung-rae of the Korea Centers for Disease Control and Prevention said, “Pathogenic organisms need long-term contact and [high concentration] to jump the species barrier.” The mad cow disease pathogen requires intake of a considerable amount of specified risk material in order to cross the species border.