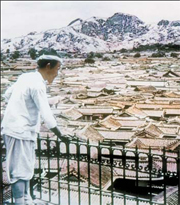 A Korean man, identity unknown, stands on the balcony of the Sontag Hotel in the early 20th century. [JoongAng Ilbo]

Antoinette Sontag (1845-1925) was the ultimate networker of the late 19th century Joseon scene.
She played a prominent role gathering together reform activists and foreign diplomats for discussions over coffee at the Sontag Hotel in Jeong-dong, central Seoul, the first Western-style hotel in Korea.
Sontag was sister-in-law to Karl Weber, the first Russian envoy to Korea and a friend of King Gojong (1852-1919).
When Sontag arrived in Korea in 1884, Weber recommended her as chef and receptionist at the Royal Palace. She became a friend to Gojong and stayed in Korea until 1909.
“She was a very skilled chef,” said Lee Jong-yong, the curator at Ewha Girls’ High School Museum. The hotel was located on the grounds of the school, which was opened in 1886 by an American missionary named Mary Scranton.
The hotel is long since gone and a stone post next to the Ewha 100th Memorial Hall marks the spot. 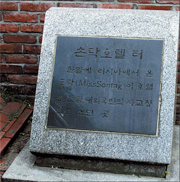 A stone marker indicates the spot where the Sontag Hotel stood. By Kwon Tae-gyun

According to some historians, Sontag introduced coffee to Gojong and often baked cookies and other homemade dishes for Queen Min, Gojong’s wife. She became very close to the royal family.
“She had good diplomacy skills,” Lee said, based on his research. “After she was granted royal permission to open the first modern hotel in Seoul in 1902, she gained the trust of Queen Min, who gave [Sontag] access to political circles.”
Gojong granted Sontag land to build a private house near Deoksu Palace in 1895. The residence was used as a clubhouse until it turned into a two-storied Western hotel.
Korea was undergoing a political, social and economic transition at the tail-end of the 19th century, and the Sontag Hotel was a gathering place for intellectuals and diplomats. People like American diplomat John Sill, French consul Victor Collin de Plancy and American missionaries Horace Underwood and Henry Appenzeller would have visited the hotel.
Government officials like Min Young-hwan, Lee Wan-yong, Yoon Chi-ho and Lee Sang-jae were also visitors. Min Young-hwan, the queen’s nephew, committed suicide in 1905 a few days after Korea signed the Eulsa Treaty with Japan. The treaty made Korea a protectorate of Japan.
Many Koreans consider Lee Wan-yong a traiter for his part in promoting the treaty, and Yoon and Lee Sang-jae helped found the Independence Club, a social-political group that promoted Korea’s sovereignty and internal reform.
A social group called the Jeongdong Club, or Jeongdong Gurakbu in Korean, would also meet at the hotel. The group comprised Western diplomats and missionaries and was established in 1894. 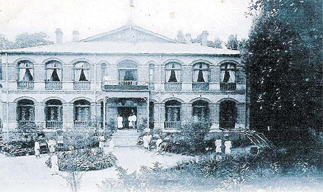 Postcards depict the interior and exterior of the Sontag Hotel during its heyday in the early part of the 20th century.

“The club members had a vision to turn Joseon into a neutral state. It was backed by Queen Min,” museum curator Lee said.
Jeongdong Gurakbu was precursor to the Independence Club and The Independent, the first modern newspaper in Hangul and English, which was established in 1896. Both the club and newspaper were founded by Seo Jae-pil, an independent activist whose English name was Philip Jaisohn.
Seo wanted the newspaper to enlighten Korean people on political, economic and social issues and to help non-Koreans better understand the country.
Seo raised internal issues such as the development of modern Korea’s education system. He favored compulsory education, Western science and technology and improved eating habits.
He wasn’t alone. The activist had close contact with the Jeongdong Club. Seo suggested building Independence Park and Independence Gate, which now stands in Seodaemun, central Seoul.
“Most reform movements were discussed in the Sontag Hotel,” said Kim Jeong-dong, a professor of modern architecture at Mokwon University. “At that time, Jeong-dong was an area of political gatherings, mostly foreign affairs.”
Foreign legations, residences for government officials and missionaries, Western restaurants and shops filled this neighborhood.
Gojong was fond of strolling on Jeong-dong Street, according to Kim.
“The Emperor tried to resist Japan with the help of the United States and France, Spain, England and Germany,” Kim said.
Russian architect Seredin Sebatin, who lived in Korea for 20 years from 1884, designed the hotel, Kim said. 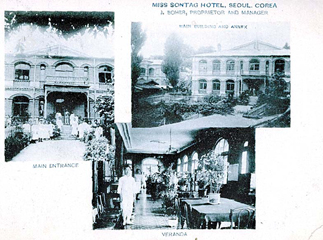 The building was torn down in 1923 and replaced with Frey Hall.

Gojong invited him to design the courts of Deoksu and Gyeongbok Palaces.
He also built the Renaissance-style Russian legation in Jeong-dong.
“The Sontag Hotel was Russian-style architecture,” Kim said, noting that the stereo bate — the bottom of a classical column — was built high, and the side and front walls were symmetrical with the entrance.
The arch-shaped window lines were decorated with ornaments and there was a balcony above the entrance where outdoor receptions were held.
People used to meet in the first-floor restaurant and café, and private guest rooms were on the second floor.
Men who stayed there included English journalist Ernest Thomas Bethell, founder of The Daehan Maeil Shinbo in 1904 with Korean journalist Yang Ki-tak; American missionary Homer Hulbert, who taught at Yukyongkongwon, Korea’s first modern educational institution; and Henry Collbran, an American railway construction specialist commissioned by Gojong to build Seoul’s tram system.
Ironically, Ito Hirobumi, a Japanese statesman, stayed at the hotel from 1904 to 1905. Ito was assassinated by the Korean nationalist An Jung-geun in 1909.
The English Prime Minister Winston Churchill overnighted there, too, when he visited Korea in the wake of the Russo-Japanese War.
Sontag sold the hotel to French hotelier J. Boher in 1904 at the outbreak of the Russo-Japanese War. After Japan annexed Korea in 1910, the Sontag Hotel was still a European hotel.
“Sadly enough, the historic building was sold to Ewha High School in 1917,” Kim said. It was used as the school’s dormitory. Six years later, the building was torn down and Frey Hall, a brand new dormitory, was built in its place.
It could accommodate 150 students and had 10 classrooms, three labs, one meeting room and a restaurant. Frey Hall was bombed during the Korean War (1950-1953).
Ha Nam Hotel was built opposite the Sontag Hotel with some of the original masonry from the Sontag Hotel and Frey Hall.
The hotel was torn down in 1995 and the site is now occupied by the Canadian Embassy. 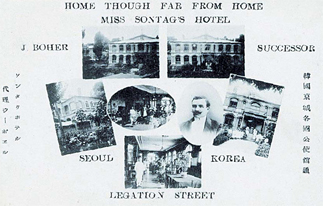 Korean architect Jean Yeo, 40, a modern architect and researcher, feels regret about the loss of historic buildings like the Sontag Hotel.
“We’re living in a world where history has to be witnessed with the eyes,” Yeo said, who is an avid collector of old postcards.
“Without the remains of Sontag Hotel, the significance of what went on there has been forgotten by most people,” he said.
Yeo collected most of his Sontag Hotel postcards in the United States.
“They were letters sent from Korea 100 years ago,” Yeo said, hoping to find more hidden stories that went on in the hotel.