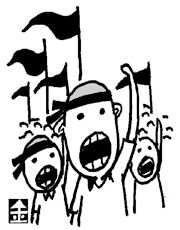 Gangjin is described as a prime site for exploration in South Jeolla Province, benefiting most from the book, “My Exploration of Cultural Heritage” by Yoo Hong-jun, a former director of the Cultural Heritage Administration.
A tour of Gangjin would highlight the cottage where the Joseon writer Dasan lived in exile, Goryeo porcelain kiln sites and the birthplace of the poet Kim Yeong-rang.
Kim Yeong-rang was imprisoned for participating in the March 1st Independence Movement in 1919 and refused to change his name into Japanese. But his poems pursued pure lyricism, not politics. Critics evaluate his work as estheticism.
In 1979, near the end of the Park Chung Hee regime, a student composed a song, “Yeongrang and Gangjin.” This student formed a trio with two fellow students and won a silver prize at a university students’ music festival. Like Yeongrang’s poems, this song also was far from political and was soon forgotten.
However, a song this student created two years later became one of the most popular songs among college students, and had a huge political and historical impact. The song was “March for the Dear.” It starts, “Without any affection, honor or fame,” and ends with, “I’ll be in the lead, follow me, those still alive.” The composer was the very same student who wrote “Yeongrang and Gangjin.”
Between the two songs was the 1980 Gwangju uprising. Student Kim Jong-ryul who enjoyed his youth playing guitar had become a member of a circle rebelling against national realities through music. His vision moved from Gangjin to Gwangju. The novelist Hwang Suk-young wrote the lyrics for “March for the Dear,” quoting some lines from a civic movement leader, Paik Ki-wan. Kim Jong-ryul set it to music and dedicated it to Yoon Sang-won, the leader of the civilian revolt in Gwangju.
Later, Kim Jong-ryul emerged a different man. In 1996, he became the CEO of the Korean branch of the multinational music company BMG and is still in charge of bringing international stars to Korea. His personal history from “Yeongrang and Gangjin” through “March for the Dear” to the multinational company shows the violent changes that Korea has gone through. In memory of the 28th anniversary of Gwangju, Kim released a revised album of “March for the Dear” sung as a ballad. The newspaper introducing the new album reported the same day that students had been hurt jostling to see Wonder Girls who were invited to a college’s spring festival. As time goes, I guess the social trend also changes.