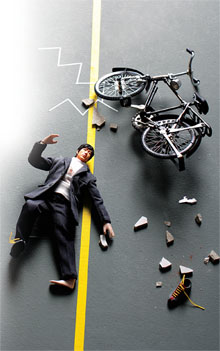 Even a minor bump can lead to a major headache.

A man we shall call Lee, because he doesn t want us to use his real name, is driving down a side street.

Suddenly the car in front of him brakes. Fenders collide, but the damage is minimal neither car was traveling at speed. Since the law takes a dim view of tailgating, Lee, who s in his 50s, is more likely to be deemed at fault.

But after inspecting the damage to his vehicle, the other man simply asks Lee for his business card and the two go their separate ways.

The victim in this case says he s been involved in three car accidents this year, yet up until now, he s never even received a parking ticket.

The accident seemed staged, Lee claims, though it is difficult to prove. 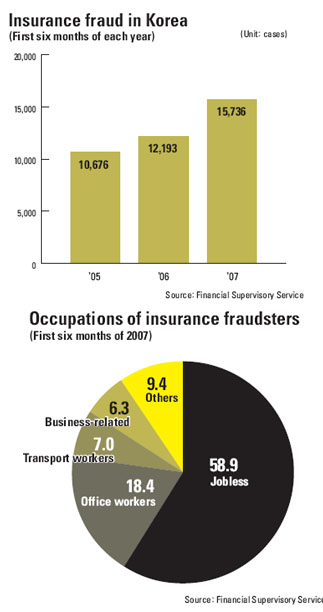 In most cases, they respond passively to unexpected situations, making it easier for fraudsters to take advantage of them.

Other easy targets are drunk drivers and people who drive the wrong way down a one-way street, Cho added.

Fraud is nothing new in this country. Studies released by the Financial Supervisory Service earlier this year show that insurance fraud is increasing at an alarming rate.

A direct consequence of this rise in fraudulent activity is the huge jump in the amount of money that insurance companies have to shell out.

Between April 2006 and March 2007, insurance fraud payments reached approximately 2.2 trillion won ($2.10 billion), according to the Financial Supervisory Service. This is a 35 percent increase on the previous year.

Pohang police in North Gyeongsang said on April 30 it had caught 108 people involved in insurance fraud. But between June 2005 and this year, 32 were indicted for automobile-related fraud.

A spokesman for the Jecheon police said while some cases usually involve several participants they fake an accident between them there are cases coming to light of single-person operators who randomly target passers-by.

It s not difficult to pinpoint why fraud is on the rise.

The economy has suffered a great deal since the late 1990s. said Cho. Many people have this notion that insurance fraud is a quick way of making money.

There s some justification to this belief, especially car fraud. Kim Seung-gi of the Jecheon police, who has been leading the crackdown, said, Even in the case of a very slight fender bender, a person can make a claim on his insurance.

Another factor is the adrenaline rush of participating in crime, Cho reckons, which might explain why the number of cases involving teenagers increased 127 percent, according to the FSS.

Insurance is like gambling. People get addicted to it, Kim Seung-gi said.

Yet another factor is the prevailing system in Korea for dealing with insurance claims. Insurance companies only hand out insurance payments to people who get admitted to hospital, said Cho. This gives con artists the opportunity to manipulate the system.

Some people check into hospitals, but during the day they can leave and go to work, and return again in the evening.

They get admitted to hospital but actually go home after dark or leave the sickbed for an entire day. There are even a few people who actually go to work, Park said.

By extending their stay in hospital, the bogus patients try to drive up the payout amount from the insurance company.

A person can receive as little as 300,000 won to as much as 700,000 won by staying in hospital for three to four days, said Lee Jong-gyu, a manager at Samsung Fire and Marine Insurance.

The insurance companies pay that money, and compensation for loss of earnings, directly into the fraudster s bank account, Lee said.

Another problem, experts from Korean Non Life Insurance Association say, is that the law lacks teeth. The penalties for those indicted are too weak, they say. The association recently released results of a study that shows that 75 percent of people convicted of insurance fraud in the last five years were either fined or simply given probation rather than imprisonment.

To prevent patients from trying to scam money out of insurance companies, medical institutions have to share information about suspected fraudsters, said Choi Han-gi, head of insurance crime prevention at the Korea Life Insurance Association.

Better communications between the agencies involved could help identify repeat offenders, he said.

The government is doing its part, it seems. Patients involved in car accidents will need to get approval from the hospital if they want to leave the hospital premises for an extended period or stay out for a night, according to a revision of the Automobile Liability Law proposed by the Ministry of Land, Transport and Maritime Affairs last week.

Additionally, doctors will decide when a patient can leave.

A reduction in fraud cases would be welcome. According to a study by the Korea Insurance Development Institute, each household in Korea has to pay an additional 100,000 won in premiums to cover payments for fraudulent claims.

Just as clothes get wet from a drizzle, the size of insurance payments is getting larger, said Lee Gil-su, team leader of the insurance investigation department at the Financial Supervisory Service.

We are planning to tighten the oversight of soft fraud committed without a sense of guilt, Lee said.

As for Lee, the unfortunate driver who fell victim to three probable frauds this year, he s quit driving.

Because of the accidents, his insurance premiums went up. Until just recently, his premiums had been going down.

He now takes the bus.