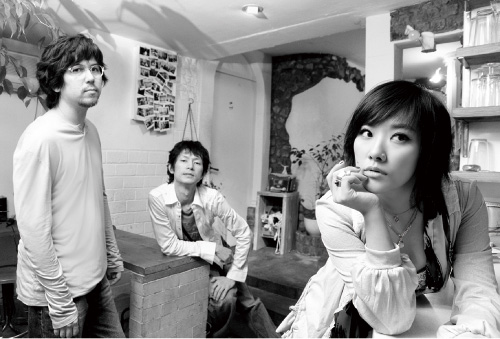 Ibadi, featuring Clazziquai’s vocalist Horan, will perform their first live concert here next weekend in Chungdam-dong, southern Seoul, following the release of their album “Story of Us.” From left: Justin Kim, Geojung and Horan. [JoongAng Ilbo]


THE NATIONAL THEATER OF KOREA
May 28 to June 1: “One Hundred Years Promise.” The National Drama Company of Korea is holding its 211th performance to celebrate the Korean Play Centennial Anniversary.
With Oh Tae-suk as director, the story explores the history of Korea from the Three Kingdoms to modern history. The story begins with a dozen refugees trying to protect their family members amid the chaos of the Korean War. A pregnant woman has her baby aborted while struggling to find her husband, who was hauled away by the government. She later meets a wounded soldier and they start a new life together. A few years later, she hears news from her husband.
The play tries to deliver the message that the true pain of the civil war was borne by innocent people, especially children.
Tickets range from 20,000 won ($20) to 70,000 won. The show starts at 7:30 p.m. weekdays, 3 and 7:30 p.m. on Saturday and 3 p.m. on Sundays.
Dongguk University Station, Line No. 3, exit 6.
(02) 2280-4114, www.ntok.go.kr

NOWON CULTURE AND ART CENTER
May 29 to June 1: “Marionette Concert.” This is the only traditional European marionette performance in Korea.
The show begins with a wooden marionette puppet playing joyful music with a saxophone. While passionately playing the instrument, the puppet sometimes winks, trying to communicate with the audience. The show includes the romantic ballet of the wooden puppet, a magic show, a gorilla family’s stunt show, a camel’s fire show and a bear riding a unicycle, which all add flavor to the performance.
Through the beautiful and creative marionette, viewers can also gain insight into the life story of director and performer, Kim Jong-gu. The delicate facial expressions and movements of the marionette can be attributed to Kim’s deft hands throughout the show.
Tickets cost 18,000 won.
The show is staged at 11 a.m., 2 p.m., and 4 p.m. on Saturday, Sunday and Thursday. Friday’s performance is for group reservations only.
Junggye Station, Line No. 7, exit 2.
(02) 2654-6854, www.art.nowon.seoul.kr

SMALL THEATER FESTIVAL
June 5 to June 29: “World’s Most Beautiful Name: Mother.” The Performing Art Management Company presents a familiar yet charming story about a mother’s love. These days, due to fast-paced lifestyles, people tend to take the value of their mother for granted. This play will let viewers step back and look at their own family, and feel the love of their own mother from a new perspective.
Jang Min-young is the director of a hospital that treats senile dementia. One day his world is interrupted when his mother, Kim Jeom-rye, is hospitalized. His mother spent her entire life selling fish to send her son to medical school. Now that Jang has a successful career, he feels embarrassed by the presence of his poor mother reeking of fish. Later, he finds out the seriousness of his mother’s illness and starts to regret his indifference toward her. Unlike other performances of a similar theme that squeeze out tears, this show will provide laughter and invoke a deep understanding from audiences.
Tickets range from 15,000 won to 20,000 won.
The show is staged at 8 p.m. on weekdays (except for Mondays) and 3 p.m. and 6 p.m. on Saturdays and Sundays.
Hyehwa Station, Line No. 4, exit 3 or 4
(02) 741-3934, www.galaplanner.co.kr

DOM ART HALL
May 31: “V.O.S. 3rd Album Release Celebration Concert.” The three-member male R&B group V.O.S. is holding a concert to celebrate the release of its third album, “Wonderful Things.”
V.O.S.’s potential was displayed in last year’s concert, when they sang ballads and captured audience attention through their dynamic performance.
Now they are back with a new concert and promise to experiment with new genres, ranging from power rock to high-energy dance music.
On top of this, the members will also perform solo, presenting their favorite songs.
Tickets range from 55,000 won to 66,000 won.
The shows start at 4 and 8 p.m.
Children’s Grand Park, Line No. 7, exit 1
(02) 2631-1580, www.domarthall.com

OLYMPIC PARK
June 1: “Morning Musume 10th Anniversary Live Tour in Korea 2008.”
Popular J-Pop group Morning Musume holds their first concert in Korea.
Group members Ai Takahasi, Koharu Kusumi, and Risa Niigaki visited Korea last year to promote their 10th anniversary album and said at the time that they would like to come back to Korea.
This concert will provide fans an opportunity to look back over the 10-year history of Morning Musume.
The group will sing and dance and each member will share her own stories. This is the final concert of the group’s tour.
Tickets range from 66,000 won to 88,000 won.
The concert begins at 2 p.m. and 6 p.m.
Olympic Park Station, Line No. 5, exit 3
(02) 1544-0737, www.interpark.co.kr

KS CHUNGDAM ART HALL
May 30 to June 1: “Ibadi Concert: Story of Us.”
Horan, the female vocalist from the popular Korean group Clazziquai, follows up her first solo album project, entitled “Story of Us,” by performing her first live concert with her band. Ibadi, meaning festival in Korean, will showcase Horan’s original compositions with her strong vocals, while departing from Clazziquai’s electronic sound. She will be joined by Geojung, an drummer and acoustic guitarist, and bassist Justin Kim, who co-produced the album.
Tickets cost 44,000 won.
The show starts at 8 p.m. on Friday, 7 p.m. on Saturday and 5 p.m. on Sunday.
Gangnam-gu Office Station, Line No. 7, exit 4
(02) 545-9174, www.interpark.co.kr

OLYMPIC PARK
May 24: “Lee Seung-hwan’s Last Superhero Concert.” Lee’s 2007 Superhero Concert is still remembered with great enthusiasm.
Boasting a superlatiave sound system and crew, the sound can be heard in the deepest corners of the stadium. With innovative performance ideas, Lee is considered by some as the No. 1 live arena musician in Korea.
This year’s concert will feature the Lee Seung-hwan Band and performances from the six-member dance troupe.
Tickets range from 44,000 won to 110,000 won.
The concert starts at 6 p.m.
(02) 470-6171, www.interpark.co.kr


2008 CHUNCHEON INTERNATIONAL MIME FESTIVAL, Gangwon Province
May 23 to June 1: Originating in 1989, the Chuncheon International Mime Festival celebrates its 20th anniversary this year. The festival will run for nine days, starting with a performance by an Australian contemporary circus company, the Candy Butchers, followed by a festival consisting of performances, conferences and workshops.
Honored as The Best Arts and Tour Festival by the Korean Ministry of Culture and Tourism, the CIMF will focus on contemporary visual mime and physical theater.
From Seoul, go to Cheongnyangni Station and take a train heading to Chuncheon Station.
Tickets range from 3,000 won to 20,000 won.
(033) 242-0585, www.mimefestival.com

BUSAN PORT FESTIVAL
May 30 to June 1: The Busan Port Authority has decided to host an annual event to raise awareness of Busan Port’s status and its importance for citizens.
The BPA hopes this event will become an iconic festival in Busan in coming years.
For the inaugural festival, which will have many different themes and programs, visitors can tour the fifth largest port in the world and even board tugboats and cruise ships. There will also be fun events like model ship-making contests, art contests and a quiz about the port.
The opening ceremony is scheduled to be held on a special stage in the International Cruise Terminal at 7:30 p.m. on May 30.
Come and celebrate the history of Korea’s “Marine Capital.”
From Seoul, take a bus from Dong Seoul Bus Terminal to Busan Central Bus Terminal.
(051) 888-2278, www.busan.go.kr